Harvey to pitch for Royals in doubleheader against Reds 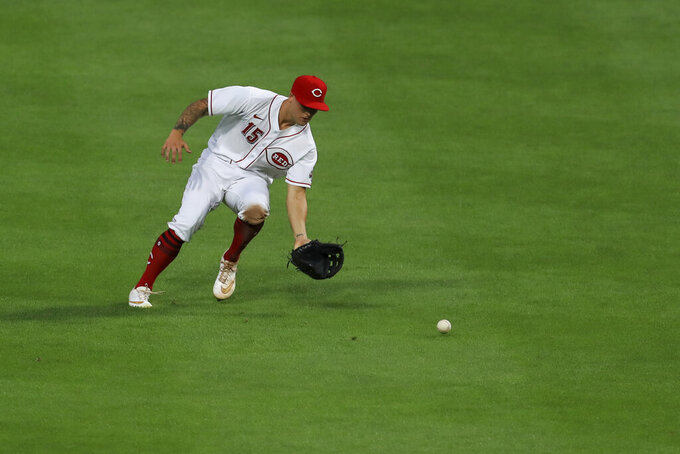 Cincinnati Reds' Nick Senzel (15) fields the ball hit for a single by Pittsburgh Pirates' Cole Tucker (3) in the fifth inning during a baseball game at in Cincinnati, Friday, Aug. 14, 2020. The Reds won 8-1. (AP Photo/Aaron Doster)

KANSAS CITY, Mo. (AP) — The positive COVID-19 test that forced the Cincinnati Reds to postpone their two games against Pittsburgh over the weekend has also forced the Royals' Matt Harvey to delay his year-long wait to return to a big league mound.

The Reds and Royals were supposed to begin a two-game series in Kansas City on Tuesday night, but Major League Baseball decided to postpone the game to give Cincinnati more time for testing. Now, the clubs will play a doubleheader Wednesday with the first seven-inning game taking place at 4:05 p.m. CDT and the second about 30 minutes after the conclusion of the first game..

“It's not strange. It's more exciting than anything,” said Harvey, who pitched against the Royals for the New York Mets in the 2015 World Series, and will be starting Game 2 against Trevor Bauer (2-0) after looking good at the club's alternate training site.

“A couple years ago there was probably going to be a few more fans that game than there will be,” Harvey said. "I haven't been going into a season as short as this without an actual spring training, and jumping right into throwing some innings at the alternate site and working up to five innings, I've been pretty thrilled with how my body has responded.'

Harvey was once considered one of the best pitchers in baseball, going 9-5 with a 2.27 ERA while earning an All-Star nod with the Mets in 2013. But after a series of injuries, the hard-throwing right-hander has struggled to regain the same form, bouncing through the Reds, Angels and Athletics before arriving in Kansas City.

In his last outing for the Angels, Harvey allowed six runs on seven hits and five walks in a loss to the Astros.

“There was a lot of mechanical issues that kind of started with spring training and was really hard for me to work through,” Harvey said. “There was a different pitching philosophy that I was not used to that I think really altered the way I throw, and obviously I'm not speaking negatively about that organization, but it was just a different type of pitching."

Harvey, who was fishing when his agent called with the offer from Kansas City, said he spent the quarantine working out with his dad. They went back to the nuts-and-bolts of pitching that the elder Harvey taught him as a kid, and while the 98-mile-an-hour fastball may not be quite there, the same snap began to show up on his delivery.

“We know that he’s been stretched out in those sim games and that doesn’t always translate one-for-one, but we’ll see how he looks, see how he feels,” Royals manager Mike Matheny said. “He knows what it’s supposed to feel like.”

Brad Keller (2-0) will start Game 1 for the Royals against Luis Castillo (0-2). Keller has not allowed a run in 11 innings since returning from a positive COVID-19 test before the season.

The Royals were seeking an extra starter because of injuries. Jakob Junis recently went on the injured list with back spasms, and Mike Montgomery and Glenn Sparkman have been transferred to the 45-day list with muscle strains.

“Obviously he has a pretty good track record, what this guy has been," Matheny said of Harvey. "You’re hoping to see parts of that again, and realizing that he’s been there, done that, there’s a lot to that as well. The experience, the stuff, the competitive nature in what they’re seeing in his pitch execution right now. You’re getting a guy that’s highly motivated to show the baseball world the pitcher that he still is. You always look for those guys with those traits.”

The Reds have not played since a player returned a positive test Friday night.

The entire team, including coaching and support staff, was tested over the weekend. Most of the club flew into Kansas City on Tuesday and the postponement allowed the Reds to work out at Kauffman Stadium.

Manager David Bell said some players remained in Cincinnati on Monday as testing was completed but hoped to be in Kansas City for the doubleheader.

“We're hopeful we'll get most if not everyone cleared by tomorrow,” Bell said. “There's still a few guys that had to go through some additional testing and protocol in order to be cleared.”

More than 30 games involving 13 teams have been postponed because of positive tests since the 60-game season began in late July. The Royals had eight positive tests when their workouts began but have not had any during the season.

The Reds were relieved that they had to miss only a couple of games. The Marlins and Cardinals missed significant time because numerous players and staff members tested positive for the novel coronavirus.

“It looks like we're going to get back at it tomorrow and hopefully we can get close if not all the way to putting this behind us and going back out and picking up where we left off on Friday night,” Bell said.