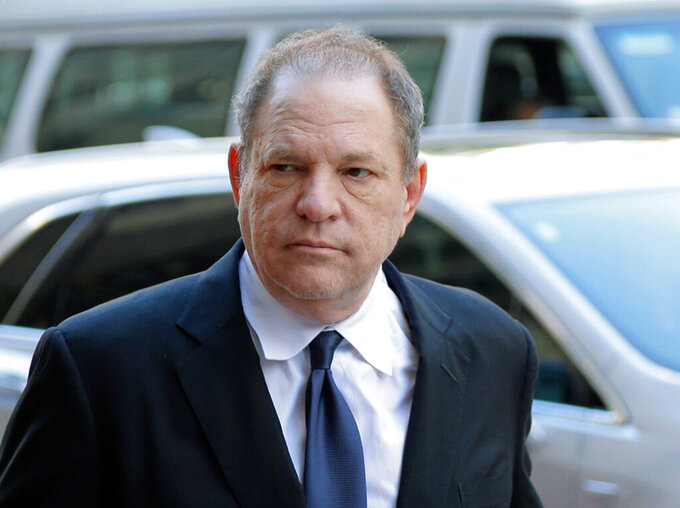 FILE - In this July 9, 2018 file photo, Harvey Weinstein arrives to court in New York. Prosecutors say Weinstein has been charged with the rape of two more women in Los Angeles County. The district attorney's office said Friday that Weinstein faces three new counts of rape and three new counts of forcible oral copulation involving two women. The incidents span from 2004 to 2010 and all took place at a hotel in Beverly Hills. (AP Photo/Seth Wenig, File)

Weinstein spokesman Juda Engelmayer said in response to the charges that “Harvey Weinstein has always maintained that every one of his physical encounters throughout his entire life have been consensual. That hasn’t changed. At this moment we cannot comment on the additional charges until we learn more about them.”

The 68-year-old Weinstein is serving a 23-year prison sentence in New York after convictions in February for rape and sexual assault of two women.

Prosecutors in Los Angeles have begun the process of extraditing him to face charges but agreed last month to delay attempts to bring him to California because of the coronavirus pandemic.

Weinstein was diagnosed with COVID-19 earlier this year while serving time in a maximum security prison near Buffalo, New York.

His next extradition hearing is scheduled for Dec. 11.

In California, Weinstein was first charged with rape in January, just as his trial was beginning in New York. More counts were added in April.

He now stands charged with four counts of rape, four counts of forcible oral copulation, two counts of sexual battery by restraint and one count of sexual penetration by use of force. The counts involve five women and stem from events in Los Angeles and Beverly Hills from 2004 to 2013.

The combined charges could bring a maximum of 140 years in prison if he is convicted.

The Silence Breakers, a group of women that includes many of the first to speak out publicly against Weinstein, said they were “gratified to see the wheels of justice continuing to turn in Los Angeles.”

“It takes a tremendous amount of courage to be part of a trial, and we stand in solidarity with the heroic women who have come forward to seek the justice they deserve,” the group said in a statement. “We have always said that we will not be silenced. Today’s news once again shows that our voices matter and have been heard.”

The charges came from a task force established by District Attorney Jackie Lacey to investigate sexual misconduct in the entertainment industry after the initial wave of allegations against Weinstein in media outlets in the fall of 2017 gave force to the #MeToo movement.

The task force had little to show for its work in its first two years, taking on more than 20 cases involving major entertainment figures but declining to file charges in most of them.

Jeremy, Guillod and Masterson have all denied the allegations and are awaiting trial.