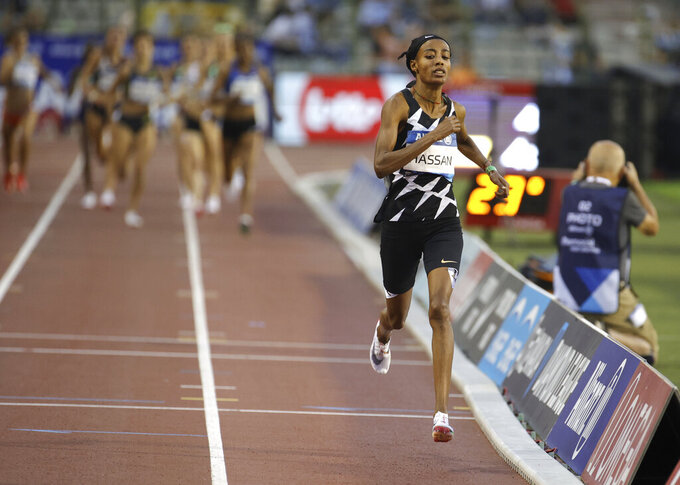 Hassan set off on pace to beat her own world record but could not maintain it at the end of a grueling season where she took gold in Tokyo over 5,000 and 10,000 meters and bronze in the 1,500.

“It is a beautiful time,” the Dutch track star said. “After Tokyo I was so tired so I just wanted to run the short distance.”

Hassan now has three of the five fastest mile times in history, including the 4:12.33 world record she set two years ago in Monaco.

In yet another tilt at his own pole vault world record, Olympic champion Armand Duplantis came up just short in three attempts to clear 6.19 meters.

Duplantis was still in action fully 30 minutes after the rest of the track and field program had finished in the next-to-last Diamond League meeting in Europe.

The 21-year-old United States-born Swede took the win in a meet record of 6.05, three centimeters higher than his winning clearance in Tokyo.

Fred Kerley, the Olympic silver medalist in the men's 100, led an American 1-2-3 to win in 9.94 seconds, ahead of Trayvon Bromell and Michael Norman.

Olympic silver medalist Christine Mboma won the women’s 200 in 21.84 seconds, just 0.03 outside the world junior record the 18-year-old from Namibia set in the final in Tokyo.

Sha’Carri Richardson of the United States placed fourth in 22.45. It was her first race in Europe since serving a one-month ban after testing positive for marijuana at the U.S. Olympic trials.

With Hassan skipping the 5,000, victory went to Francine Niyonsaba in a personal best time of 14:25.34 that was also a Burundi national record.

Niyonsaba, the 2016 Olympics silver medalist over 800, has stepped up to 5,000 after she was blocked from her favored event because of rules restricting runners with elevated natural testosterone levels.

“I still do not know if I like the long distance more than the 800 meters, but I love challenges,” Niyonsaba. “I won´t think too much about it because it is what it is.”

The Diamond League finals meeting is held next Wednesday and Thursday in Zurich.