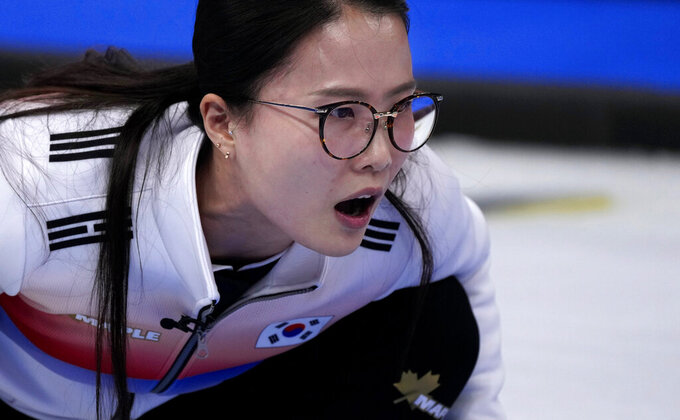 SYDNEY (AP) — They were the hometown heroes of the Pyeongchang Olympics, the South Korean underdogs with the catchy nicknames who swept past more seasoned teams to nab the silver medal in curling.

And then in a flash, the story of the “Garlic Girls” went from a heart-warmer to a heart-breaker.

The five-member women’s curling team, whose name is a nod to their rural hometown’s prolific garlic production, publicly accused two coaches and a curling executive of verbally and emotionally abusing them and withholding prize money. The scandal rocked South Korea, where the team had achieved celebrity status, and highlighted the abuse and corruption that has long plagued the country’s elite sports scene.

Four years later, the Garlic Girls have arrived at the Beijing Olympics ready to do what they couldn’t in Pyeongchang — be themselves and enjoy the experience, said the team’s skip, or captain, Kim Eun-jung.

“We basically decided to have fun this time,” said Kim, whose stern expressions, owl-eyed glasses and ear-piercing shouts to her teammates on the ice made her a fan favorite during the Pyeongchang Games. “We will focus on showcasing our best shots instead of worrying too much about the results.”

This time around, the team has vowed to avoid the unbearable stress that was heaped on their shoulders by their former coaching staff, said their Canadian coach Peter Gallant.

“This whole experience of going to Beijing, it’s such a relaxing one compared to the pressure cooker they were in four years ago,” said Gallant, who said he was horrified by the women’s allegations of abuse against his former colleagues. “Nobody could be under any more pressure at curling than they were.”

That the Garlic Girls consider competing in the Beijing Games during a pandemic “relaxing” — despite the stringent containment measures put in place by China as part of its zero-tolerance COVID-19 policy — is perhaps the best indication of the suffocating stress the women faced in the run-up to Pyeongchang.

The women said they were mistreated by former Korean Curling Federation Vice President Kim Kyung-doo; his daughter and their head coach, Kim Min-jung; and her husband, Jang Ban-seok, who was also the country’s mixed doubles curling coach.

In addition to withholding their prize money, the players said Kim Kyung-doo frequently verbally abused them, and that the coaches made them miserable by controlling their lives, even attempting to force out Kim Eun-jung after learning she planned to start a family. Kim Kyung-doo later admitted to verbally abusing the team and said the family would leave the sport for good, though he denied withholding the women’s money.

The Korean Curling Federation ultimately banned the trio from the sport for life.

In December 2020, the Daegu District Court gave Kim Kyung-doo a one-year prison term and Jang Ban-seok a suspended one-year sentence for embezzling official subsidies, donations and prize money. The court later reduced Kim’s term to a suspended eight-month sentence, saying he didn’t use all of the embezzled money for personal purposes and that he also contributed to promoting curling in South Korea.

But the court turned down an appeal filed by Jang. Both Kim and Jang appealed the latest rulings to the Supreme Court, according to the Daegu court.

Gallant, who has worked with the team on and off since 2016, said his limited Korean-language skills left him largely unaware of the verbal abuse his players were enduring.

When the women went public with their accusations, his heart broke.

“You become so attached to them, you hate seeing anybody take advantage of them,” he said.

But mixed with the horror he felt over their allegations was pride over their bravery.

“It just took so much strength for them,” he said. “In this society where there’s so much respect for elders ... for them to come out in public and basically accuse people older than them of the things that they did, it just was an incredible story.”

The abuse spoiled what should have been one of the happiest times in the women’s lives, Gallant said. Curling was virtually unknown in South Korea prior to Pyeongchang, and the Garlic Girls came into the Games ranked eighth in the world.

Their electrifying performance on the ice quickly captivated curling fans, and their quirky personalities made them global sensations. Realizing most Westerners would struggle with their names — particularly because they all share the common South Korean surname of Kim — they turned to their favorite breakfast foods as inspiration for their individual nicknames, including “Steak,” and “Pancake.”

The women became media darlings, starring in a series of commercials for Korean electronics brand LG. So intense was their fame that Kim Eun-jung — nicknamed “Annie” after a brand of yogurt —couldn’t even walk down the street without being recognized, Gallant said.

But behind the scenes, the women were suffering.

“It was very bittersweet. Not too many people knew the background story of the abuse. … But they had so much pressure on them — ‘If you don’t win, you’ll never curl again’ — that kind of stuff,” Gallant said. “They really didn’t get to enjoy that silver medal the way they should have."

After going public with their allegations of abuse, the team went through a long stretch where they didn’t curl much at all. So Gallant was delighted when he got the call to come back as their coach for another chance at an Olympic medal.

“I’d say they deserve to be there, but I’m a little biased,” Gallant said. “They’re a strong team; it’s not a fluke that they’re there.”

On Thursday, the women beamed as they waved to fans in the curling arena ahead of their first battle of the Beijing Games.

In the end, they lost to curling heavyweight Canada, 12-7. They high-fived each other anyway. And on Friday, they went on to beat Britain.

“In Pyeongchang, we had pretty good results, so the pressure is definitely there,” Kim Eun-jung said after Thursday night's loss. “But especially with the amazing atmosphere in Beijing, we think we’re more than ready to enjoy the Games this time.”