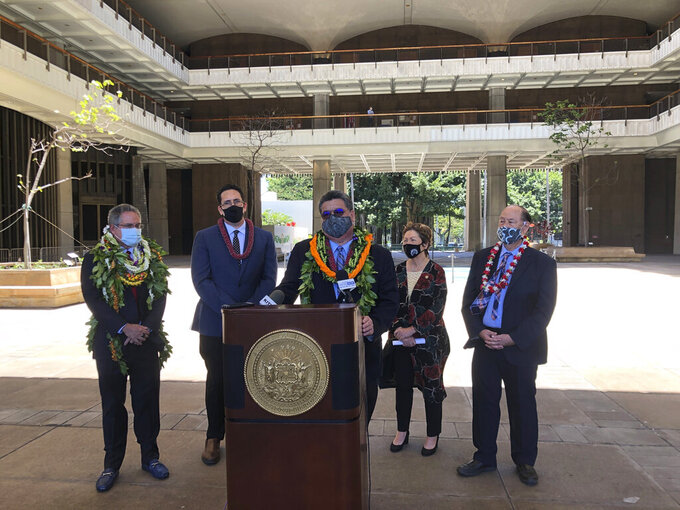 Hawaii Senate President Ron Kouchi speaks at a podium at the state Capitol in Honolulu on Thursday, April 29, 2021, flanked from left to right by Sens. Kalani English, Jarrett Keohokalole, Michelle Kidani and Brian Taniguchi. Hawaii's lawmakers are wrapping up a legislative session marked by a generous influx of federal aid that helped the islands weather the shock of the coronavirus pandemic. (AP Photo/Audrey McAvoy)

HONOLULU (AP) — Hawaii's lawmakers on Thursday wrapped up a legislative session marked by a generous influx of federal aid that helped the islands weather a pandemic that threw tens of thousands of people out of work and upended the state’s tourism-dependent economy.

Lawmakers began the session in January with the news that Congress had appropriated $1.6 billion to Hawaii as part of a coronavirus relief package. The House and Senate used nearly half of the federal funds to pay back $700 million the state borrowed from the federal government to pay unemployment insurance claims earlier in the pandemic. They appropriated $313 million to repay another loan the state took out to pay employee salaries when tax revenue tanked.

“I think it’s really extraordinary to see how differently the legislative session has gone as a result of the federal congressional action that was taken,” said state Sen. Jarrett Keohokalole, chairman of the Senate Health Committee, at a news conference after the session.

Lawmakers hiked a rental car tax and gave authority to the counties to raise the transient accommodations tax as they attempted to have tourists shoulder more of the state's tax burden.

“People are just going out to pay more. If they want to visit Hawaii, that’s going to be the bottom line,” House Speaker Scott Saiki said.

Saiki predicted tourists will continue to travel to Hawaii because it is one of the safest places for people to visit and because international travel is almost at a standstill during the pandemic. Many countries aren't admitting American tourists, so U.S. travelers don't have as many options for places to go.

He lamented the Legislature's failure to raise the state's hourly minimum wage from the current $10.10. “The pandemic wouldn’t have hurt nearly as much if our residents were just better situated coming into it, if they were making wages that paid enough to cover their basic needs," Thornton said.

Thornton said he is disappointed lawmakers didn’t pass bills that would have raised taxes on the state’s top income tax bracket, or those earning more than $200,000 a year, and hiked the capital gains tax and tobacco tax.

He argued the state would benefit “if we had a tax system that wasn’t so regressive, that didn’t take more from struggling families than it does from wealthy investors as a percentage of people’s income — a tax system, that is sufficient in terms of generating the revenue necessary to make real investments in people and infrastructure.”

Malia Hill, the policy director for the Grassroot Institute of Hawaii, welcomed the lack of tax increases. The failure of those tax initiatives meant the session "wasn’t as bad as it could have been," she said.

“This is an especially bad time to raise taxes. The economy is fragile. Businesses are struggling,” Hill said.

She was disappointed lawmakers didn't pass legislation that would have curtailed the governor's emergency powers after the governor unilaterally issued 19 emergency proclamations during the past year suspending various laws and instituting new rules to address the pandemic.

One failed bill would have given the Legislature a say in whether the governor would be allowed to continue extending emergency proclamations for a single disaster.

“It’s almost as though the Legislature is basically ignoring the problems we’ve seen with the balance of powers issue of the emergency statute, and kind of abdicating their responsibility to address it,” Hill said.

Saiki told reporters the House leaders reviewed a draft of the emergency powers bill negotiated by the House and Senate, but they killed it after realizing it didn't address the question of whether the governor had the authority to renew proclamations beyond 60 days. He said lawmakers would work on the issue over the summer and return with a new version next session.