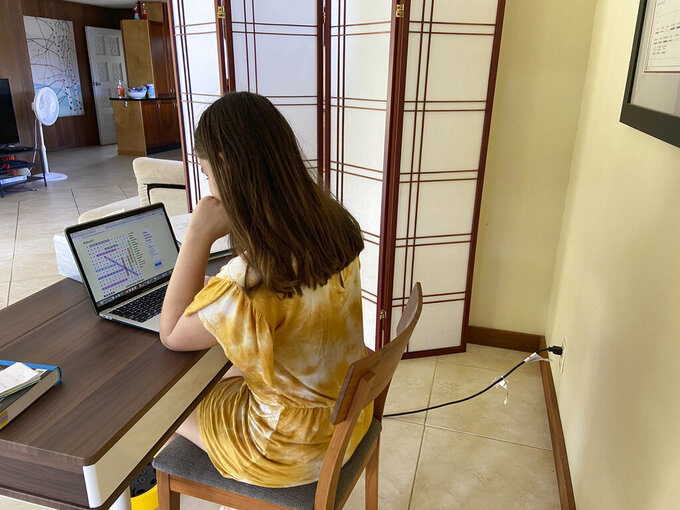 FILE - This file photo provided by Adrienne Robillard shows her daughter, name withheld by parent, doing school work at a computer at home in Kailua, Hawaii, Friday, Sept. 18, 2020. Hawaii's Department of Education is recommending that the state's public schools stop using a distance learning program that parents said had contained racist and sexist content. Schools across the nation have been using Acellus for distance learning and some have dropped the program after parent complaints. (Adrienne Robillard via AP, File)

The state Department of Education completed a review of Acellus Learning Accelerator and reviewers recommended discontinuing its use as a primary curriculum resource “due to its inconsistency in quality and rigor,” Superintendent Christina Kishimoto said in a letter to parents on Monday.

The department “recognizes the curriculum does contain content that reviewers found acceptable and aligned to standards, and will be working with schools that use Acellus to identify and leverage such content, as appropriate,” the letter said.

Schools across the nation use Acellus, according to the Missouri-based company.

Parental complaints have prompted schools in other states to drop the program.

“During the summer months, in an effort to respond quickly, Acellus was offered to families reluctant to physically send their child to school when the school year opened,” Kishimoto's letter said.

Complaints included misspelling and mispronunciation of Queen Liliʻuokalani — the last monarch to rule the Hawaiian Kingdom — and racist depictions of Black Americans and Islamophobic stereotypes. Some have also complained the program lacks rigor.

School officials are working on a transition plan, Kishimoto's letter said: “It is clear this issue has caused disruption, and for that we apologize.”

The school board is scheduled to consider this week a recommendation by board Chairperson Catherine Payne that Acellus be phased out by the end of the school year. She wants Kishimoto to tell parents Acellus was hastily selected without proper vetting during the pandemic.

“It is a mistake that the Department has learned from, and a mistake that it should now remedy," Payne wrote to the board. “That remedy should include a plan to phase out Acellus in all schools while still ensuring schools are able to provide distance learning to their students. It should also include the ability for families to immediately stop using Acellus and select another option.”