He set out to mobilize Latino voters. Then the virus hit. 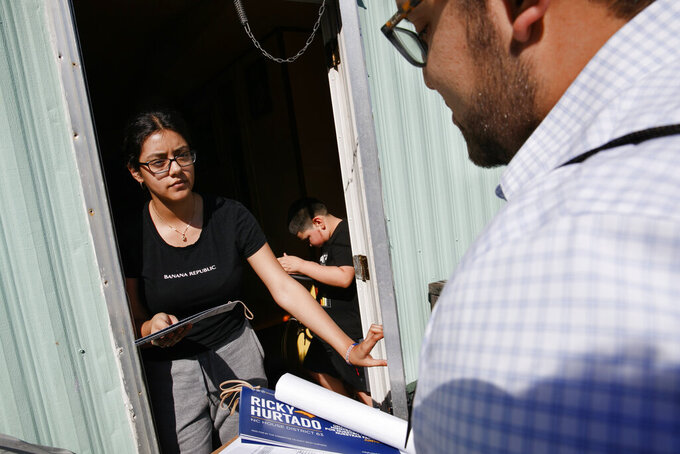 GRAHAM, N.C. (AP) — Like many Americans, Ricky Hurtado had plans for his summer.

He formally launched his first bid for public office in March and expected to spend sweltering days knocking on doors, clenching glossy campaign literature and making his case directly to voters. This summer, he was going prove that a 31-year-old son of Salvadoran immigrants could give Latinos a say — even in North Carolina, even in part of Donald Trump’s America.

But this is a story about waiting — and about the detours on the path to power.

The coronavirus upended the Democrat’s campaign for statehouse. Hurtado stopped door-knocking. The closest he came to potential voters was standing 6 feet or more away while volunteering at food banks or a virus testing site. And, still, he contracted the virus himself.

Across the U.S., the coronavirus outbreak is disrupting Latinos’ difficult climb up the political ladder. The disease has disproportionately sickened Latinos and impeded voter registration ahead of the November presidential election. In North Carolina, only 5,000 Latinos have been added to the voter rolls since mid-March, less than half the number added during the same period four years ago.

The state has 1 million Latino residents, but two-thirds are not eligible to vote because they are either under age 18 or not citizens — the second-highest rate in the nation.

In Alamance County amid the housing tracts and thick forests reaching between Raleigh and Greensboro, there are three Latinos who cannot vote for every one who can.

For decades, those numbers meant that Latinos’ growing population in the state didn’t translate into political power.

Now the children of immigrants are coming of age.

“It really all depends on me,” said John Paul Garcia, 20, the only member of his family of six who can vote. “I’m my sister’s voice, my brother’s voice, my parents’ voice.”

Hurtado knows it would easier to focus on white voters, still the majority in the district. But he wants his campaign to be about more than just winning the seat, flipping the legislature or even putting a Democrat in the White House.

“It’s actually engaging people,” he said this spring, as he drove to knock on doors in one of the many trailer parks across the county.

It would be the last time Hurtado door-knocked before the pandemic hit.

Hurtado’s parents arrived in the United States in the trunk of a car.

The two fled the civil war in El Salvador in 1980 and were driven across the Mexican border into California. Hurtado was born in Los Angeles, but when he was 7 his family moved to North Carolina, hoping the cleaner air would be better for his asthma.

Hurtado was conscious he was viewed as different.

“No somos de aquí, ni de alla,” is how he describes his feeling of alienation, using a phrase that translates to: “We're from neither here nor there.”

Hurtado earned a degree from the University of North Carolina-Chapel Hill, and followed that up with a master’s in public policy from Princeton University. He was drawn back south when his adopted state’s governor at the time, Republican Pat McCrory, urged the federal government to deport thousands of unaccompanied children who were then crossing the border to flee violence in Central America.

“I just felt like, ‘That’s not the North Carolina I know,’’’ Hurtado said.

Hurtado plunged into the local activist scene, where he met Yazmin Garcia. After they married, Hurtado and Garcia settled in Alamance County. Hurtado now has a different way of describing his roots: “Soy de aquí y de alla.”

“I’m from both here and there.”

Finding Latino voters was always going to be difficult. Fear of immigration authorities is ever-present. That’s partly due to Alamance County Sheriff Terry Johnson, a Republican first elected in 2002, when he ran TV ads that warned of “aliens” in the county and played music from the old TV series "The Twilight Zone.”

Johnson was the only sheriff in the country other than Arizona’s Joe Arpaio to be sued by the Obama administration's Justice Department for civil rights violations against Latinos.

A federal judge dismissed the case. Johnson believes the government merely “wanted a Southern sheriff to make an example out of,” he said in an interview.

Johnson remains a menacing figure to some Latinos, while others support him. Latinos here and across the U.S. are politically diverse.

Omar Lugo, 42, blames liberal activists rather than Johnson for local Latinos’ fears. “By accusing the sheriff of being racist, that doesn’t take us anywhere,” Lugo said.

When Aranza Sosa, 22, went to the Graham town square holding Black Lives Matter signs in early June, Johnson’s deputies turned her away. They've watched over the square and a monument to the county’s fallen Confederate soldiers in the weeks since national protests broke out over racial justice and policing.

Sosa was upset by their presence. She learned of Hurtado’s campaign and called him in tears.

There have been a lot of tears for Sosa lately. Her uncle died of COVID-19 in late May. Some days she’s so anxious about catching the disease that she can’t go to work at her job in a retirement home. On most days, Sosa goes in. She needs the money.

“My job, I’m lucky to have it, but under the circumstances it breaks a lot of people,” Sosa said. “It feels like I’m expendable, at this point, to the government.”

The Pew Hispanic Center found that 59% of Latinos say they or someone in their household has lost a job or wages due to the virus, well above the 43% of U.S. adults reporting the same.

In Alamance County, where Latinos are 13% of the population, they account for 62% of the county’s 2,500 COVID cases.

Hurtado and his wife both know how disruptive the illness can be. In mid-June they came down with the virus. Their bout was relatively mild, and they recovered by early July.

But there’s another disappointment weighing down the household.

Garcia was nearing the end of the yearslong slog to become a U.S. citizen. One of her final steps, an in-person interview, was postponed in March due to the pandemic.

Immigration services hasn’t rescheduled the appointment, making Garcia one of an estimated 315,000 people unlikely to get their citizenship processed before the election.

Garcia may not be able to vote for her husband.