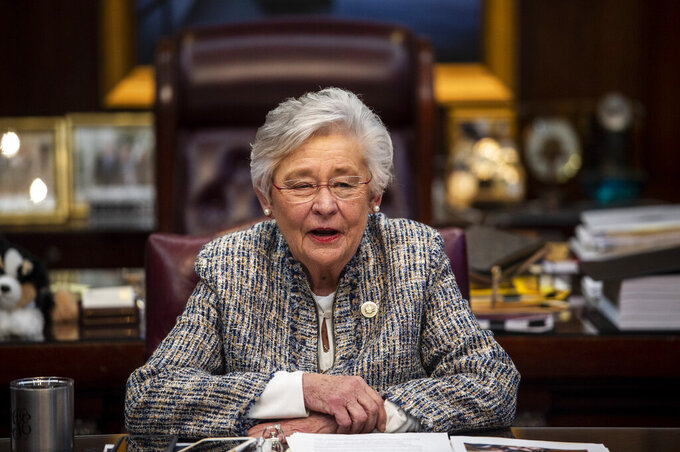 Alabama Gov. Kay Ivey holds a sit down interview with reporters in the Governor's office at the Alabama State Capitol Building in Montgomery, Ala., on Wednesday, Feb. 3, 2021. (Jake Crandall/The Montgomery Advertiser via AP)

BIRMINGHAM, Ala. (AP) — Alabama “isn't out of the woods yet” with COVID-19 and it's too early for Gov. Kay Ivey to lift a mask order that has been in place since July, a top health expert said Wednesday as state pandemic deaths topped 10,000.

Dr. Sarah Nafziger, vice president of clinic support services at the University of Alabama at Birmingham, told a news briefing she favors retaining the requirement, which is set to expire Friday afternoon without an extension.

Other Republican-led states including Texas and neighboring Mississippi are easing health restrictions as vaccination numbers rise and illnesses linked to the new coronavirus decline, and Ivey is facing pressure to eliminate the mask order. On social media, some are sharing the phone number to the governor's office and asking callers to voice opposition to the rule.

Hospitalizations are at the lowest point than anytime since June, and Nafziger said a reduction in testing indicates fewer people are having symptoms that prompt them to seek a test. But easing restrictions before more people are vaccinated could reverse the overall trend of improvement since mask wearing reduces illness and infection, Nafziger said.

“Is it time to do away with the mask mandate in Alabama? No," she said, adding: “We have a lot of vulnerable people in our population, and the last thing we want is for them to get sick or die.”

Ivey scheduled a news conference for Thursday morning to discuss the pandemic. Citing the decline in cases, Republican Lt. Gov. Will Ainsworth asked Ivey to end the mask requirement, which he has opposed all along.

Local governments and businesses can make their own rules if needed and individuals can make decisions for themselves and follow safety rules until vaccinations and immunity levels are sufficient, he said. “But we can do all of these things without a Big Brother-style government mandate looming over us,” he said in a statement.

While the coronavirus causes only mild to moderate symptoms for most people, it is particularly dangerous for the the elderly and people with other, serious health problems.

The Alabama Hospital Association has asked Ivey to extend the mask rule, which requires facial coverings in indoor public places and outside when social distancing can't be maintained, but the governor's office has not said what she will do.

Ivey has said she prefers “personal responsibility” to government mandates and the state is headed in the right direction, yet "we still have some work to be done,” spokeswoman Gina Maiola said Monday.

The state's death toll from COVID-19 hit 10,029 on Wednesday, state statistics showed, and more than 497,000 people have tested positive. Of more than 1.4 million vaccine doses delivered to providers in the state, almost 973,000 shots have been administered to patients.

With the state lagging behind others in delivering immunizations, Nafziger said UAB — one of the top shot providers in the state — isn't “sitting on doses.” Shipments typically arrive with little notice and in varying amounts, she said, so most scheduling has been “very last minute.” Patients don't like the system, she said, “and we hate it.”