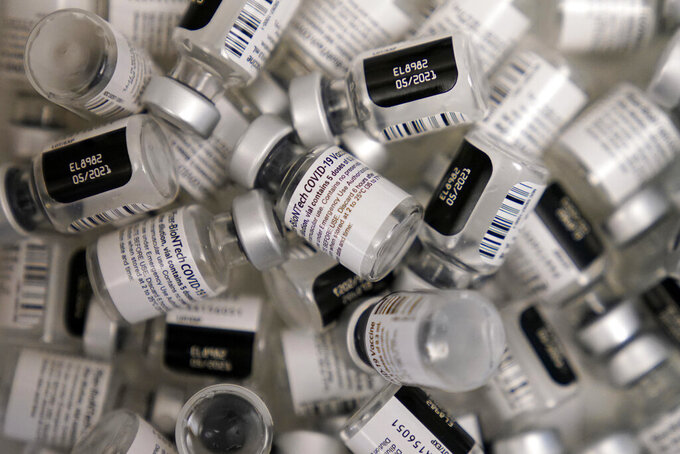 FILE - In this Friday, Jan. 22, 2021, file photo, empty vials of the Pfizer-BioNTech COVID-19 vaccine are seen at a vaccination center at the University of Nevada, Las Vegas. Demand for coronavirus vaccines among early priority groups in Nevada has been high, but officials worry that they may encounter resistance among people to get the shots as more become eligible. (AP Photo/John Locher, File)

CARSON CITY, Nev. (AP) — Demand for coronavirus vaccinations among early priority groups in Nevada has been high, but officials worry that they may encounter resistance as more doses become eligible.

Nevada has historically ranked low among states for vaccination rates for other viruses such as influenza.

The U.S. Centers for Disease Control reported that during the 2019-2020 flu season, only 44.4% of Nevada’s population got influenza vaccinations. It was a significant increase from prior years but still lower than any other state.

About 289,000 shots have been given after officials organized mass vaccination sites and pop-up clinics, and pressed the federal government for answers about the state’s low allocation of doses.

Nevada’s plan divides priority groups into two “lanes." One involves demographic groups, with residents 70 and older at the top, while the other is organized by workplaces, with frontline workers such as doctors and police officers receiving early priority for vaccines.

Heidi Parker, executive director of Immunize Nevada, a non-profit group that educates and provides resources to residents about vaccines, said she has heard reports of staff declining to be vaccinated at some law enforcement agencies and long-term care facilities.

She said vaccine “hesitancy” hasn’t been a significant issue among residents 70 and older, many of whom may have had relatives who died before the polio vaccine was introduced in 1955, she said.

“Those who understand the value of the vaccine, they’re desperate to get vaccinated,” Parker said.

Younger people lack the same first-hand experience with life-threatening viruses, she said. “Pre-pandemic, we used to say that vaccines became victims of their own success. They did exactly what they were supposed to do, so we forgot about them,” she said.

In early January, immunization officials said the state was preparing to confront vaccine skepticism and working to refine its data on the issue.

A lack of data on who is accepting and who is declining vaccinations has made it difficult to try to reach out and persuade people to get shots, Parker said.

But state officials on Wednesday started publishing statistics on the number of people vaccinated. They are still working on getting more extensive data broken down by sector or demographic group, state Health and Human Services spokesperson Shannon Litz said.

In Clark County, which has the majority of the state's population, Southern Nevada Health District published data on vaccination rates by race or ethnic group on Wednesday.

To guide its outreach efforts, Immunize Nevada's has relied on data from a University of Nevada, Reno study that found 35% of the state's general population was unlikely to be vaccinated, including 58% of Black residents surveyed who said they were “not at all likely” or “not too likely” to take the shots. Nevada is not among the 23 states that release vaccination data broken down by race or ethnic group.

Still, Parker said she's encouraged by early indicators such as the number of seniors in the Reno-Sparks area who have filled out forms to get on vaccination waiting lists. About 30,000 people have applied in Washoe County to be put on the list, including people who are 65 through 69 but not yet eligible, said county health district spokesman Scott Oxarart.

Immunize Nevada is using flyers, videos and social media to try to spread the word on COVID-19 vaccinations. But the effort differs from vaccination efforts in previous years by focusing on explaining how to get doses as opposed to overcoming vaccine skepticism.

With little information about how many doses are bound for the state, it has been difficult to inform people about eligibility and when appointments will become available.

Parker worries that people may give up on getting vaccinated because of unforeseen delays in vaccine distribution.

“I’ve seen this with the flu," she said. “If a person goes to three pharmacies that are out of flu shots, the chances that they are going to pursue a fourth decreases.”