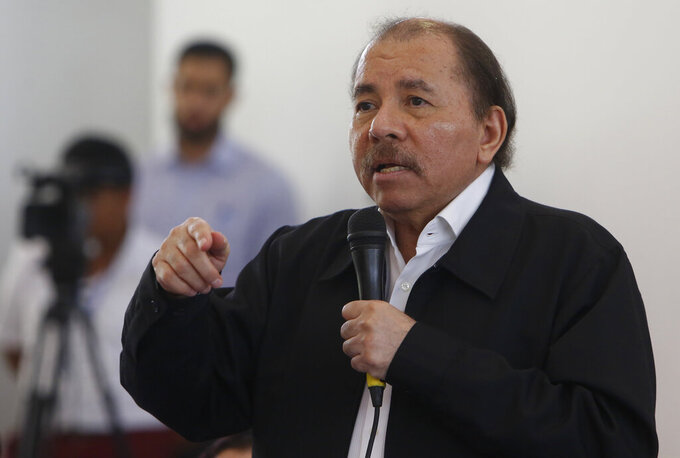 FILE - In this May 16, 2018 file photo, Nicaragua's President Daniel Ortega speaks at the opening of a national dialogue, in Managua, Nicaragua. Ortega spoke in a nationally televised address on Monday, May 18, 2020, and blamed health monitoring measures taken by Costa Rica for his country's decision to close their two border crossings. The dispute boiled over since Costa Rica began May 8 testing all truck drivers entering the country for COVID-19. (AP Photo/Alfredo Zuniga, File)

MANAGUA, Nicaragua (AP) — The Pan-American Health Organization said Tuesday that Nicaragua's government has denied its personnel access to the nation's hospitals despite having offered access, a move adding to the widespread belief President Daniel Ortega is trying to underplay the effects of the coronavirus pandemic.

Ciro Ugarte, the emergencies director for the regional health body, said Nicaraguan officials contacted his organization a week ago to say they would comply with requirements to provide detailed information about coronavirus cases and deaths, as well as allow visits to hospitals.

“Up to now, none of these actions have occurred, despite repeated requests from the PHO,” Ugarte said.

Up to this week, Nicaragua had reported only 25 confirmed COVID-19 cases and eight related deaths. Those numbers became more difficult to defend as more Nicaraguans spoke out about the deaths of their relatives and reports mounted of near-clandestine burials.

On Tuesday, Nicaragua's Health Ministry suddenly increased the case count tenfold, to 254, and said the number of deaths had grown to 17.

But there is evidence suggesting that might still be a vast under-count. Victims' relatives claim that some cases are simply listed as “atypical pneumonia” or “respiratory failure.”

On Monday, Ortega acknowledged that “some” of the 309 cases of people who have died of pneumonia since January might have involved COVID-19. Interestingly, on May 3 the health ministry had reported only 86 pneumonia deaths so far this year, suggesting there were 223 such deaths between May 3 and May 15.

The lack of action in neighboring Nicaragua has concerned Costa Rican officials, who on May 8 began testing all truck drivers entering the country for COVID-19. Costa Rica said 61 truckers had so far tested positive, most trying to enter from Nicaragua, though some came from Panama.

Vice President Rosario Murillo, who is Ortega's wife, seemed to minimize the pandemic in statements Tuesday.

Murillo said that so far this year around the world, “3.7 million people have died of hunger and 14 million children were denied life through abortions. In comparison, 237,000 people have died from coronavirus in five months,” she said.