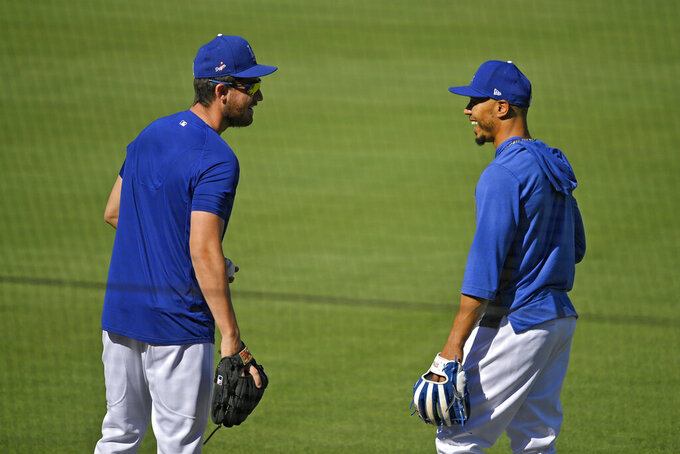 Bellinger is looking to pick up where he left off after a stellar performance for the Los Angeles Dodgers in 2019. The reigning NL MVP batted .305 with 47 homers and 115 RBIs for the NL West champions last year.

“Everything is going to be so weird this year. It’s going to be fun,” he said Thursday on a video conference call. “It could be a once-in-a-lifetime thing, so I’m just taking advantage of what we got.”

What the Dodgers have in addition to Bellinger's offensive power is Mookie Betts, the 2018 AL MVP with Boston. He joins a team that led the NL with 279 homers last year, but lost to Washington in the Division Series.

Bellinger, who turns 25 on Monday, isn't putting pressure on himself to repeat last season's statistics.

“I just want to focus on what I’ve got to do in order to be good. I’m understanding that a little more," he said. "Just go out and be as consistent as I can, fine-tune the things that make me really good.”

Bellinger was the NL Rookie of the Year in 2017, and then struggled the following year before rebounding in 2019.

“It was tough sledding for Cody for quite some time coming off that rookie campaign, and you start wondering, ‘Was it real?' You question the confidence, the mechanical piece," manager Dave Roberts said. "Everything he does now is with conviction and intent. There’s a talent component, but also there’s a process and preparation component that sometimes you have to struggle to understand the value of it.”

Bellinger spent the last few months working out in his home state of Arizona after spring training came to a halt in March because of the coronavirus pandemic. He focused on fine-tuning his swing.

“I just got to work on it in a stress-free environment,” he said. “Just minor things I think about throughout the year. Figuring out why I was so good and remembering the feeling and not getting too caught up on last year. You’re always evolving. I feel really good with where I’m at this year. It could be a blessing in the long run."

Bellinger and Roberts said hitters' concerns about the new batter's eye in the renovated outfield pavilions at Dodger Stadium are being addressed. First baseman Max Muncy hurt his left ring finger after he said he couldn't see a pitch that hit him earlier in the week.

“It was a little low," Bellinger said, "and the seats weren’t blocked off, so if there were fans there, the pitcher’s arm would potentially come out of the stands.”

Roberts said the batter's eye “is still a work in progress" that may involve changing the paint scheme to matte from gloss, among other things.

During the first week of summer camp, Bellinger has gotten used to drinking out of his own cooler, not having teammates on either side of his locker, and having everyone hear what the players say on the field in an empty stadium. Coming from Arizona, where masks in public were not always mandatory, he's had to don one in California, where they are required.

“I don’t think it’s a hassle to wear a mask," he said. "If your breath stinks, it sucks. But it just means you brush your teeth a little more.”

NOTES: RHP Tony Gonsolin showed up at camp for the first time Wednesday, appearing on the field in uniform for an evening intrasquad scrimmage. He was one of seven players absent from camp earlier in the day. Roberts said Thursday he could not discuss the reason for Gonsolin missing the first week of camp and the reliever has not yet been made available to media. With LHP David Price choosing not to play this season, Gonsolin may have a shot at the rotation.