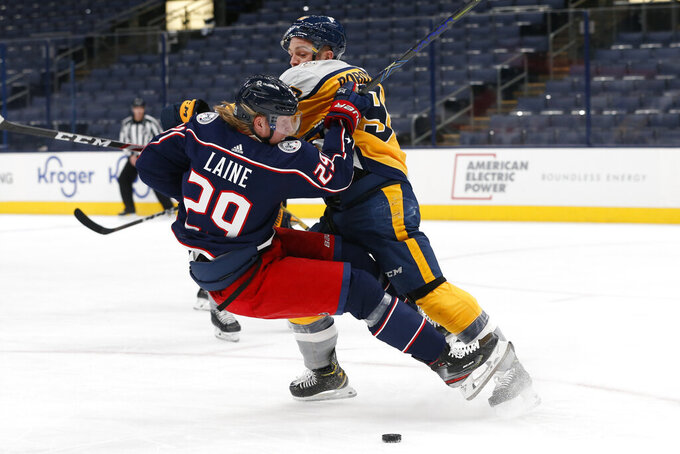 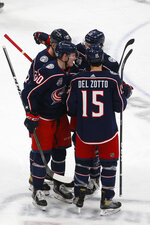 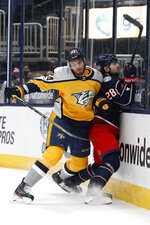 Merzlikins, who hadn’t started since Jan. 31 because of an upper-body injury, picked up his first shutout of the season and the sixth of his career.

“I had too many rebounds in front of me, and (the team) took care of me,” he said. “They blocked the shots when I wasn't there. It's hard, especially after an injury, after a few practices to catch up (to) that level.”

Merzlikins allowed two goals on nine shots on Monday night in relief of Joonas Korpisalo. But he was solid the whole way against Nashville, particularly in the the third period when Columbus was outshot 13-4 amid a Nashville offensive push.

“Good for him," Columbus coach John Tortorella said. "I know he’s been chomping at the bit to get back in the game, and I thought he played really well.”

Max Domi and Eric Robinson also scored for the Blue Jackets, who snapped a two-game skid but have recorded points in five of their last seven to stay close to the leaders in the Central Division.

Juuse Saros stopped 19 shots for the injury-plagued Predators, who have lost five of six and are among the lowest scoring teams in the NHL.

At the end of a largely disjointed first period, the Blue Jackets used some luck to get on the board. With 17 seconds left, Atkinson's shot on a rush caromed off the skate of Nashville defenseman Matt Benning as he was diving for the block, causing the puck to flutter up and over Saros.

“That’s a strange one for sure, but when you’re hot, you’re hot,” Atkinson said. “You just shoot the puck and good things happen.”

Domi connected with a heavy one-timer from the right point to beat Saros at 4:56 of the second. Robinson added an empty-netter with 2:31 left in the game.

“It’s frustrating when you play a good game for the most part and can’t find ways to get rewarded,” he said. “Having said that, we can’t sit in here and feel sorry for ourselves and say, ‘We have no puck luck.’ At this point we have to find a way to make our own luck.”

LOOKING FOR A PUSH

The Blue Jackets play three more against Nashville and one against Detroit in their next six games, presenting a chance to make a move in the Central at the expense of two struggling teams. The top of the standings are crowded. With 20 points, Columbus (8-6-4) is two behind leaders Florida and Chicago and one behind Tampa Bay and Carolina.

“We found a way to win a game and that’s very important for us to get two points here, no matter how ugly it was,” Tortorella said.

Columbus has secured preliminary permission to have around 2,000 fans in Nationwide Arena for games, which have so far been played in an empty house because of COVID-19. The city health department has approved the request for 10% capacity and the team awaits the final OK from the Ohio Department of Health. A few teams have already have opened up games to limited crowds.

Predators: Their last two games were postponed because of severe winter weather in Dallas. ... C Ryan Johansen missed his sixth game with an upper-body injury. ... D Mattias Ekholm and F Mathieu Olivier have each missed three with injuries.

Blue Jackets: D Zach Werenski, still apparently bothered by a lower-body injury suffered on Feb. 4, has missed five of the last six games. ... G Matiss Kivlieniks was taken off injured reserve and assigned to Cleveland of the AHL. ... Atkinson has posted a goal streak of at least five games for the second time in his career. He tallied in seven straight games in 2018-19.

The teams wrap up the two-game series on Saturday in Columbus.