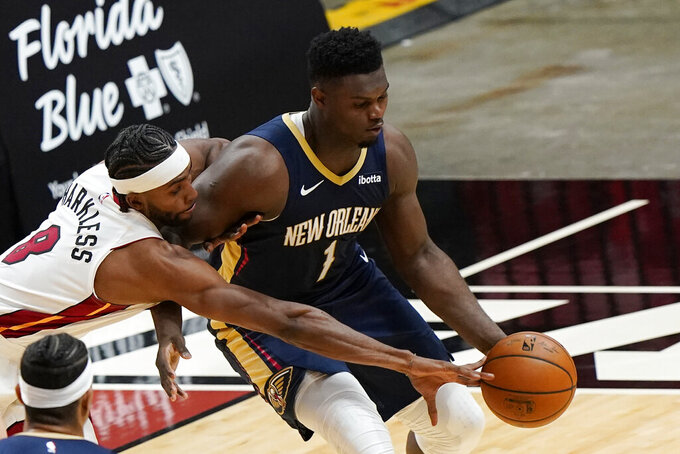 NEW ORLEANS (AP) — Zion Williamson, in the span of one pandemic-compressed offseason, has gone from being a rookie on playing-time restrictions to a New Orleans Pelicans elder statesman with no limits on his minutes.

Williamson’s eagerly awaited transformation to a leader in the locker room and on the court is also occurring under a new coach in Stan Van Gundy, whose plain-spoken, detail oriented, “old-school” style seems to appeal to the biggest star on his roster.

These are heady times for New Orleans’ NBA franchise, which has seen its front office, roster and coaching staff almost entirely overhauled since the hiring of David Griffin as Pelicans executive vice president of basketball operations in the spring of 2019.

Griffin only cautions observers not to expect too much, too fast.

“We believe we have the makings of a playoff roster here, but we also recognize we’ve had incredible amounts of change and coach Van Gundy and his staff are going to have the shortest amount of turnaround in league history,” Griffin said. “The results in the short term aren’t what we’re going to judge it on.”

Technically, Williamson is now the longest-tenured player on the roster. His drafting first overall in 2019 came shortly before official paperwork on Anthony Davis’ trade to the Los Angeles Lakers was filed, bringing Brandon Ingram, Lonzo Ball and Josh Hart to New Orleans.

Ingram became a first-time All-Star in New Orleans and the Pelicans have made him a centerpiece of the franchise, signing him to a five-year, $158 million contract when he became a restricted free agent.

Ball will remain at point guard while the multi-team trade that sent Holiday to Milwaukee brought in two well-regarded veterans: guard Eric Bledsoe from the Bucks and 7-foot center Steven Adams from Oklahoma City.

Griffin said what “excites us the most” is the roster’s “versatility” and “the positionless basketball we can play.”

“Both Zion and B.I. have the ability to be ball-dominant and make plays for other people. Bled can do the same," Griffin said. “Steven Adams is a terrific passer and someone who has the ability to make the right read.

“You’ll see us be a lethal transition team, but all of that’s going to start from the defensive side of the ball,” Griffin added. “We’ve given (the new coaching staff) players that are capable of doing it.”

Williamson played in just 24 games last season because of arthroscopic knee surgery and a protracted rehabilitation that was designed to proactively change his body and the way he moves in order to sustain his overall health long-term.

Williamson has made it clear that while he understood the way his time on the court was managed last year, he is glad that stage of his young pro career is over.

“Being on restrictions is not fun,” Williamson said. “I’ll be out there like five minutes and it felt like one minute and I’m coming out.

“Knowing there’s not restrictions and I can just play without having to worry about certain movements and all that stuff, I’m just excited. I get to do what I love.”

Williamson averaged 22.5 points and 6.3 rebounds last season – a remarkable level of efficiency considering the limits placed on him.

“I rely on instinct and IQ,” Williamson said. “Last year, I could only rely on IQ and sometimes my body wasn’t able to do certain things. But now that I have both of them again, I think there’s going to be a big difference.”

Williamson has given Van Gundy good reviews so far, noting that his new coach’s approach to coaching resembles the “old-school” style of his stepfather, who first taught Williamson the game and this year serves as his offseason training supervisor.

Van Gundy is “a very detailed guy – all of the coaches are,” Williamson said. “With a coaching staff like that and the players we have here -- we want to get better and we want to win – so, everybody’s locking in and we’re taking his guidance.”

New Orleans committed nearly 16 turnovers per game last season, which ranked last in the NBA and led to relatively easy transition points for opponents. As Van Gundy seeks to tighten up the Pelicans defensively, responsible ball-handling and passing has been an emphasis.

“Probably the No. 1 defensive priority is to cut down on our turnovers,” Van Gundy said. “There’s not a team in the league that’s not better defensively with their defense set than they are scrambling in transition. ... We have to build better habits taking care of the ball to allow our defense to stand a chance at the other end.”

With Ingram and Ball shooting career-best percentages from 3-point range and veteran JJ Redick maintaining his strong shooting from deep, the Pelicans were in the top third of the NBA in that category.

But Van Gundy doesn’t foresee the 3-ball being as prevalent a part of the offense this season – and expectations surrounding Williamson's health an extended playing time are a big reasons why.

“While we’ve still got guys who can shoot it well and make people pay, a lot of times we’ll have one less 3-point shooter on the floor,” Van Gundy said.