Heart inflammation after virus is rare in Big Ten athletes 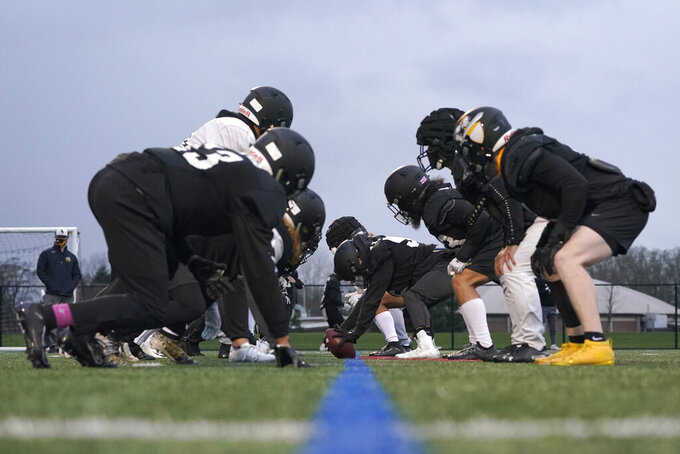 FILE- In this Tuesday, Feb. 2, 2021, file photo, university football players wait for the snap on the line of scrimmage during practice in Tacoma, Wash. Heart inflammation is rare in Big Ten Conference athletes who’ve had COVID-19 and in most cases causes no obvious symptoms, according to the first data published from the Big Ten COVID-19 Cardiac Registry on Thursday, May 27, 2021, in JAMA Cardiology. (AP Photo/Ted S. Warren, File)

Heart inflammation is rare in Big Ten Conference athletes who’ve had COVID-19 and in most it cases causes no obvious symptoms, according to the first data published from a league registry.

The results from the Big Ten COVID-19 Cardiac Registry show just 37 of nearly 1,600 athletes — a little over 2% — had evidence of heart inflammation on imaging tests. Of these, nine athletes had any chest pain, palpitations or other symptoms, according to the study published Thursday in JAMA Cardiology.

Follow-up testing showed inflammation had disappeared a month later in most of the athletes affected, but about 40% of the 37 had scarring. The researchers said it is uncertain whether these affects pose a substantial health risk, although myocarditis, the medical term for the type of heart inflammation involved, is a leading cause of sudden death in athletes.

Heart inflammation has been found in other COVID-patients and concern that the virus could increase risks for athletes led the league to create the registry last September. That same month, the Big Ten mandated heart screening including imaging tests for athletes with positive COVID-19 tests, before allowing them to return to play. Through December 15, 9,255 athletes had been tested and 2,810 or 30% had tested positive.

The study involved 2,461 athletes from 13 Big Ten schools who had heart testing, including 1,597 whose testing included imaging scans, from March through Dec. 15, 2020. It is not known if inflammation found was caused by COVID-19 or something else.

Most of those whose scans showed inflammation were men. Age and race data were not included.

The yearly incidence of sudden cardiac death in college athletes has been estimated at 1 in 50,000.

“Even a small number of events in a young and apparently healthy population has devastating consequences,’’ the study authors said.

Dr. Saurabh Rajpal, a cardiologist at Ohio State University and study co-author, said the composite results echo other studies including one at his university. But he noted that the new data found widespread variations in prevalence of affected athletes, from zero at one university to 7% at another.

Different imaging scanners and techniques may explain the variations, Rajpal said, adding that the results underscore a need to develop a standard protocol for heart testing in athletes.

Athletes who develop heart inflammation should be sidelined until symptoms disappear and imaging scans are normal, he said.

Those with COVID-19 want to know “how long until we can go back and start playing? We mostly just make up a number,’’ Rajpal said. “As we follow more patients, we will be able to come up with an answer.’’

The authors emphasize that the imaging scans detected more heart inflammation than other less expensive tests, and found it in some athletes who had normal results on those other tests. But a JAMA Cardiology editorial questioned whether imaging should be required for deciding when athletes at the college and high school level can return to play.

Since it remains unknown whether inflammation found on the scans poses a potential risk for sudden death, relying on blood tests and other more widely available methods should be considered, the editorial suggests. Athletes, their families, coaches and other stakeholders should be aware that imaging may pick up a few more cases of inflammation, but also might lead to unnecessary restrictions on returning to play, the editorial says.