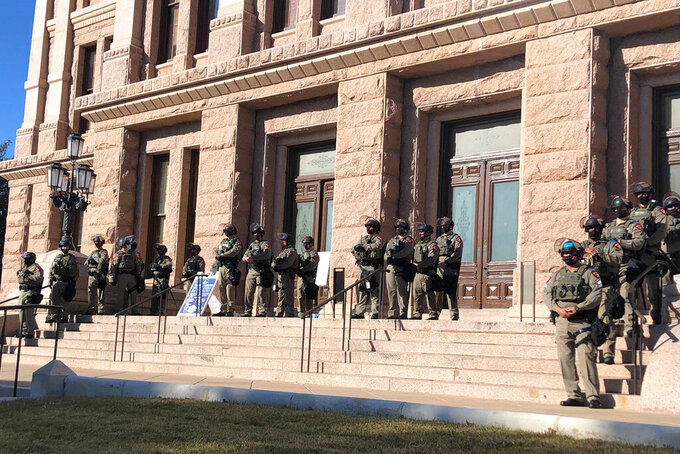 Texas state troopers wearing riot gear stand guard outside the Capitol in Austin, Texas, on Tuesday, Jan. 12, 2021, for the opening of the legislative session. The Texas Department of Public Safety has increased its presence at the state Capitol after last week's deadly attack on the U.S. Capitol by supporters of President Donald Trump. The FBI also has warned of plans for armed protests at all 50 state capitals and in Washington, D.C., in the days leading up to President-elect Joe Biden's inauguration. (AP Photo/Jim Vertuno)

The start Tuesday of a new legislative session in Texas was guarded by an extraordinary show of state police and National Guard members, following the violent insurrection at the U.S. Capitol last week and new FBI warnings of armed protests nationwide ahead of President-elect Joe Biden's inauguration.

But the heavy security went unmentioned by Republican Gov. Greg Abbott and lawmakers during a largely ceremonial gaveling in of a new session, resulting in a scene of striking contrast, as warm speeches in the House and Senate carried on with troopers on alert for unrest just outside the chamber doors.

No incidents were reported and Texas Department of Public Safety troopers greatly outnumbered what turned out to be a small number of protesters outside and visitors inside the Capitol, where officials required rapid COVID-19 tests for entry as cases surge statewide.

“It's sad that our country is in a state of turmoil where we have to fear violence like what happened in Washington," Democratic state Rep. Julie Johnson said. "I'm really grateful that DPS has really took this seriously to protect us."

Lawmakers gathered at the same time President Donald Trump was in Texas, hundreds of miles south on the border with Mexico, where he trumpeted his campaign against illegal immigration in an effort to burnish his legacy with just eight days before leaving office. Outside the Texas Capitol, several pro-Trump demonstrators used a bullhorn pressed up against a phone to amplify Trump's border speech.

Others outside included several armed men in combat gear wearing “Texas Militia” labels on their clothes. The chairman of the Republican Party of Texas, former Florida U.S. Rep. Allen West, took a picture with them and posted it on the Texas GOP’s official Twitter account.

The first day of session for the Texas Legislature — which meets for 140 days every two years — is typically among the most crowded, making the calm and sparsely populated Capitol grounds Tuesday all the more noticeable.

The newly chosen Texas House speaker, Republican Dade Phelan, said “many of our citizens question the electoral process itself” while laying out some of the issues lawmakers will confront over the next five months. He did not mention Trump or that there has been no evidence of widespread election fraud.

Abbott did not directly address the election or violence at the U.S. Capitol in brief remarks to lawmakers, urging them to support police and get people back to work in Texas, where the pandemic has left a half-million fewer jobs than a year ago.

Asked Monday about whether he believed Trump had incited violence, Abbott said, “Violence always obviously is unacceptable. But the people who are responsible for the violence are the people who did it.”

An internal FBI bulletin has warned of plans for armed protests at all 50 state capitals and in Washington, D.C., in the days leading up Biden’ inauguration on Jan. 20. State officials said more security would be deployed to the Capitol but made no mention of specific threats.

“I think we are proactive with DPS and sending a message this is the people’s house,” Democratic state Sen. John Whitmire said of the security. “It’s going to be protected. You have to pay attention to the (FBI) bulletins. But you can’t not do your business or the other side wins.”