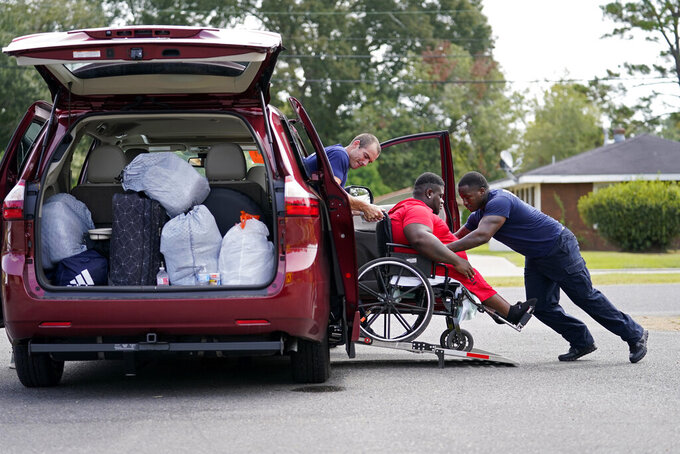 ENNIS, Texas (AP) — Thousands of Gulf Coast residents fled from rapidly intensifying Hurricane Laura as hotels and shelters filled quickly, exacerbating the struggles of evacuees who lost jobs in the coronavirus pandemic long before the storm ever approached on Wednesday.

Leaders in Texas and Louisiana urged people in the expected path of what forecasters called an extremely dangerous major hurricane to move inland before it was too late. Forecasters predicted a life-threatening storm surge would pummel a wide stretch of the coast.

Evacuees traveled as far as Ennis, Texas, a city south of Dallas several hours from the coast.

James and Samantha Bison evacuated from Jasper, Texas ,about 200 miles (320 kilometers) away, and made their way to Ennis after being directed there by a 211 information line. Hoping for shelter there, they ended up sleeping in their car and then were told by another 211 operator to head to San Antonio, about 250 miles (400 kilometers) in another direction.

Texas Gov. Greg Abbott said the state had 200,000 hotel rooms for evacuees. But Ennis city leaders said they had no space in hotels and no vouchers to give evacuees.

Shalonda Joseph, a teacher who evacuated to Ennis from Port Arthur, Texas, with her sisters, said their family had burned through savings as some of them had already lost their jobs because of the virus.

Both the Joseph and Bison families eventually headed further north to Richardson, a Dallas suburb, and waited to see if a hotel would give them rooms.

Elsewhere, hundreds of residents of 11 southwest Louisiana nursing homes were evacuated, according to state health officials. Most were in Calcasieu Parish, which is expected to receive a direct strike from the hurricane. State Health Department spokeswoman Aly Neel said buses and ambulances moved the residents mainly to other facilities in Louisiana, but also Texas.

In the south Louisiana community of Delcambre, a steady stream of customers stopped for last-minute supplies at Shawn’s Cajun Meats and Grocery.

“Getting some snacks. Definitely getting some beer. I’m pretty sure that’s the highest-selling product around here,” said Austin Domingues, 26.

Domingues said he and his family had been preparing for days for Laura. At his father’s nearby sugar cane farm, “we’ve been moving equipment on the highest ground we have.”

While Domingues said his wife likely would evacuate to Lafayette, further north and east of Delcambre, he and others in his family planned to stay put. He said he expected to stay at his father’s farm, where the house is 14 feet (4 meters) off the ground.

“I don’t know if it’s too smart, but we’re going to stay just in case we need to help people out,” he said.

But Lexie Creighton, who was rounding up shopping carts outside the grocery store, said she planned to head to Lafayette after ending her shift, rather than ride out Laura. Her home took on water during Hurricane Rita, which ravaged the Gulf Coast just days after Hurricane Katrina in 2005.

“Getting out of the surge, you know?” she said. “The water’s going to come up. It’s better safe than sorry.”

In Lake Charles, Louisiana, the National Guard picked up residents in school buses and took them to a local coliseum. Many of the evacuees were families with small children. The National Weather Service evacuated its office in Lake Charles, transferring its forecasting duties to the service’s office in Brownsville, Texas.

Leaders in both Texas and Louisiana urged residents to flee in the final hours before landfall made it too dangerous to travel.

Nim Kidd, chief of the Texas Division of Emergency Management, said the city of Austin had run out of free hotel rooms, forcing officials to send evacuees further away from the coast.

Kidd said the convention center in Austin might be opened to temporarily house evacuees while more hotel rooms are set up for residents. He said hotel rooms are being reserved for evacuees in some nearby counties.

Traci Shannon left Galveston for her parents’ home in north Houston on Tuesday with her husband, two teenagers, and six pets.

“It would be hard to find a hotel or shelter that accepts all the animals we have,” she said. “We could hide the rat and the gecko, but my husband is a disabled vet and he has a comfort dog that’s about 45 pounds.”

Back at the hotel in Richardson, Texas, the sun began to set Wednesday, and the Bisons' prospects of spending another night without a roof loomed.

James Bison, though, seemed unperturbed. They had both lost jobs at a restaurant and lumber mill this year, and they were surviving.

Moments later, Samantha Bison rushed out of the hotel waving her arms and giving the thumbs up. “We got in,” she called.