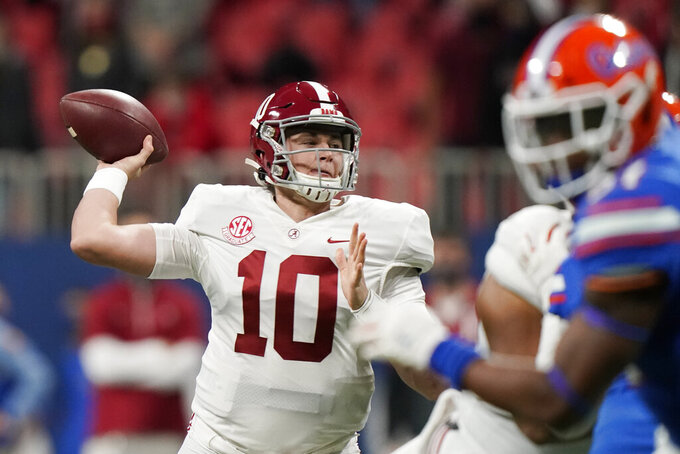 FILE - In this Saturday, Dec. 19, 2020, file photo, Alabama quarterback Mac Jones (10) throws a pass against Florida during the first half of the Southeastern Conference championship NCAA college football game in Atlanta. Jones has been named a finalist for the Heisman Trophy. The Heisman will be awarded Jan. 5 during a virtual ceremony as the pandemic forced the cancellation of the usual trip to New York that for the presentation that usually comes with being a finalist. (AP Photo/Brynn Anderson, File)

Alabama teammates Mac Jones and DeVonta Smith along with Clemson’s Trevor Lawrence and Florida’s Kyle Trask have been named finalists for the Heisman Trophy.

The Heisman will be awarded Jan. 5 during a virtual ceremony. The coronavirus pandemic forced the cancellation of the usual trip to New York for the trophy presentation that comes with being a finalist.

Jones and Smith are the eighth set of teammates to be finalists together since the tradition started in 1982. Smith is trying to become the first wide receiver to win the Heisman since Michigan's Desmond Howard in 1991.

If it isn't Smith, who leads the nation in receptions (98) and receiving yards (1,511), the winner will be a quarterback for the 13th time in the last 15 years.

The top-ranked Crimson Tide will play No. 4 Notre Dame in the College Football Playoff semifinals on Jan. 1.

Lawrence was the preseason favorite to win the award, but missing two games after contracting COVID-19 slowed his campaign. The junior quarterback and presumptive first selection in the next NFL draft did not play against Boston College and at Notre Dame.

He did play in Atlantic Coast Conference championship rematch against the Fighting Irish last weekend and led the Tigers to a blowout victory. On the season, Lawrence has thrown for 2,753 yards and 22 touchdowns in nine games, helping Clemson reach the playoff for the third time in his career.

No. 2 Clemson plays No. 3 Ohio State in the Sugar Bowl semifinals on Jan. 1. Lawrence would be the Tigers' first Heisman winner.

Trask leads the country with 43 touchdown passes and 4,125 yards. The senior is trying to join Steve Spurrier, Danny Wuerffel and Tim Tebow as Heisman-winning quarterback from Florida.

The rest of the top 10 was revealed in order, starting with Alabama running back Najee Harris. The Crimson Tide is the second team to have three players in the top five in Heisman voting.

Pitts is the first tight end to finish in the top 10 of the Heisman voting since Notre Dame's Ken MacAfee was third in 1977.