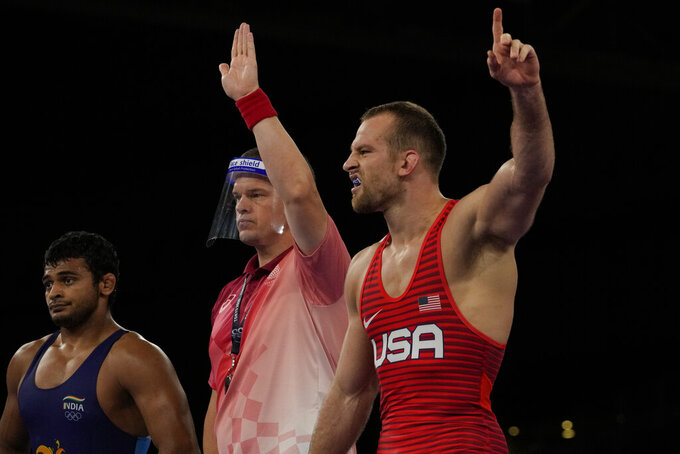 CHIBA, Japan (AP) — Helen Maroulis wishes she had a do-over.

Being too careful cost her a chance to become the first American woman to win two Olympic gold medals in freestyle wrestling. She lost to Risako Kawai of Japan 2-1 in the 57-kilogram semifinals on Wednesday.

Maroulis said she realized too late that she overestimated Kawai’s attacking skills.

“I felt like I needed to be stronger in the position so that I could kind of impose my will, and I felt a little bit more like I was reacting to her,” Maroulis said.

All three points in the match were scored for passivity — the first two against Maroulis and the last against Kawai.

“I maybe had some other options that I could have gone for, but I think I was thinking like, ‘Oh, she’s waiting for me to clear out so she can shoot,’” Maroulis said. “And I thought, ‘Let me just really defend this.’ And then I was thinking, like, ‘I’ll create my own opportunities.’ But I didn’t do it and it didn’t happen.”

Maroulis was glad to be involved in action at all. Since winning the gold, she has fought through concussions and injuries that threatened her career. She said the extra year before the delayed Olympics helped her heal.

“If you told me a year ago that I was going to feel this healthy today, I just — I would have probably not have believed you,” she said. “So to be here like this is like — I’m so grateful.”

Kawai advanced to face Iryna Kurachkina of Belarus in the final.

Maroulis will wrestle Khongorzul Boldsaikhan of Mongolia or Fatoumata Yarie Camara of Guinea for bronze on Thursday. She could become the first U.S. woman to earn more than one Olympic medal in the sport.

Frank Staebler of Germany defeated Ramaz Zoidze of Georgia 5-4 in one of the bronze medal matches. Staebler had previously announced that he would retire after the Olympics. The 32-year-old German is a three-time world champion who ended his career by winning his first Olympic medal. Mohamed Ibrahim Elsayed of Egypt defeated Russian opponent Artem Surkov in the other bronze medal match.

It was Japan’s first wrestling gold at the Tokyo Olympics. Tynybekova, the No. 1 seed, had won her first three matches by a combined score of 24-0.

In the bronze medal matches, Iryna Koliadenko of Ukraine defeated Anastasija Grigorjeva of Latvia 3-1 and Taybe Mustafa Yusein of Bulgaria beat the Russian opponent Liubov Ovcharova 10-0 in a match that lasted 56 seconds.

David Taylor of the United States advanced to the final in the men’s freestyle 86kg class. He won all three of his matches by technical superiority: 11-0 over Ali Shabanau of Belarus, 12-2 over American-born Myles Amine of San Marino and 10-0 over Deepak Punia of India.

Taylor will face Hassan Yazdani of Iran in the gold-medal match. Yazdani, the No. 1 seed, took Olympic gold at 74kg in 2016. Taylor beat Yazdani en route to winning the world title at 86kg in 2018.

Thomas Gilman of the United States will have a chance to compete for bronze in the freestyle men’s 57kg class.

Gilman faced Russian opponent Zavur Uguev, the No. 2 seed, in his opener. It was 1-all at the break. Gilman took a 4-3 lead in the final minute, but Uguev scored two in the final 10 seconds for the win. Uguev reached the final, meaning Gilman will be in repechage on Thursday. Gilman needs two wins to claim bronze.