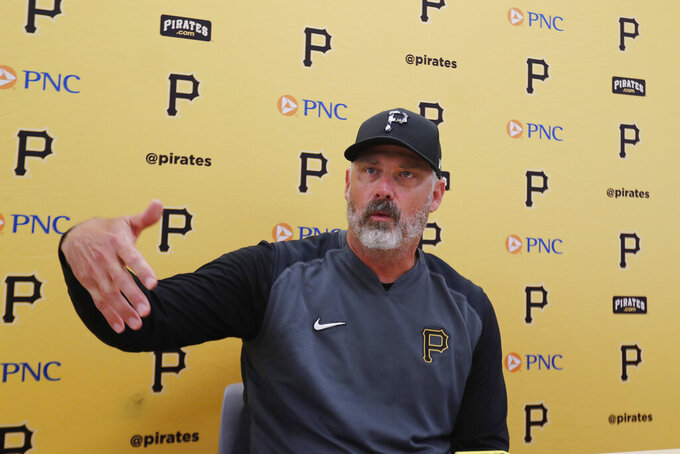 FILE - In this March 12, 2020, file photo, Pittsburgh Pirates manager Derek Shelton addresses the media after a spring training baseball game against the Toronto Blue Jays, in Bradenton, Fla. Shelton can't wait to get around his players, and not just because the first-year Pirates manager can show off his new pair of Jordans. Shelton is in a tight spot as he tries to get up to speed quickly with an organization he's been a part of for less than seven months.(AP Photo/Carlos Osorio, File)

His answer was always some variation of “sorry, that's tomorrow" before jogging off to his next meeting. The bit was equal parts corny and comforting, a way for the former minor league catcher turned major league assistant to set an easygoing tone for a club with both a modest payroll and modest expectations.

Three months later, the routine feels like a relic of a reality that no longer exists. The questions Shelton must grapple before managing his first regular season game are far more complex. Like, how is he going to make sure his team is abiding by the 108-page health protocol Major League Baseball put together in response to the COVID-19 pandemic? How will he support players who might feel the need to speak out on social justice issues? How will he help create a positive vibe in a clubhouse filled with players smarting from a protracted and testy negotiation with owners on when and how to return?

Figuring out a fifth starter and who to pencil in at designated hitter on a given night seems quaint by comparison.

Still, the thorny path forward beats sitting at home trying to build relationships through a computer screen. He’d frequently crash the weekly video conferences his starting pitchers held each Wednesday, but as weeks turned into months, the routine got old.

He's eager to get back to some semblance of normal, even if normal is in short supply in 2020. Instead of six weeks in Bradenton, Florida to get ready, Shelton will have half that time to turn the trick with players split at facilities 100 miles apart. The team announced on Thursday it will use People's Natural Gas Field in Altoona — a longtime Pirates Double-A affiliate — as an “alternate training facility” once spring training 2.0 starts next week.

In a way though, all the changes might work to Shelton's advantage. No manager has worked under the unique conditions the league faces over the next three months. In a way, it's everyone's first year on the job no matter how many World Series rings they might have stashed away.

“Managers who have managed in playoff situations probably have a little bit more advantage with how to use their bullpens and things like that,” Shelton said. “But I think it’s an unknown for all of us because there are going to be rule changes along with it. You’re putting in the three-batter (minimum), which we’ve talked about all along. Now, you’re putting a runner at second (in extra innings), which no one has managed with. ... No one really knows how it’s going to be affected.”

Shelton is in the middle of getting a crash course from assistant hitting coach Mike Rebelo — who used the runner at second rule while managing in Double-A last year — on how to handle the rule designed to avoid games from stretching well into the night. Then again, he's getting a crash course in a lot of things. Like the role his players might want to play in bringing attention to social justice issues following the death of George Floyd last month while being taken into custody by police.

The Pirates have long history of having high-profile minority players serve as franchise cornerstones, from Hall of Famers Roberto Clemente and Willie Stargell to 2013 NL MVP Andrew McCutchen to current first baseman Josh Bell. While the players have not discussed specifics about any public gestures, Shelton said he will support them “100%."

Given everything else on his plate, the actual baseball part of Shelton's job might serve as the least stressful. Though the Pirates lost starter Chris Archer for the season earlier this month, Shelton confident there's enough talent to pick up the slack. Four starting spots are set and he may experiment with the fifth by using an “opener." Rather than having a dedicated designated hitter, he expects to move it around based on match-ups and workload.

It's going to be weird. All of it. From the temperature checks to the social distancing guidelines to the ban on spitting. This isn't the gig Shelton thought he was inheriting last December. Then again, this isn't the gig anyone thought they had last December. It could be worse. A lot worse. He doesn't have to coax 90 wins out of the Pirates to get in the playoff hunt. A third of that total might get them in the mix.

“You play really good for a month,” Shelton said, “you’re going to put yourself in a situation.”