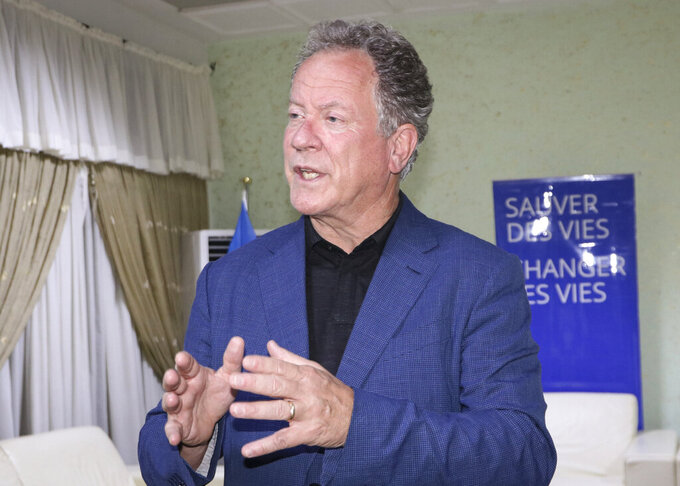 FILE - In this Oct. 9, 2020 file photo, World Food Program (WFP) Executive Director David Beasley speaks to journalists about the organization's Nobel Peace Prize win, at the airport in Ouagadougou, Burkina Faso. After a visit to Yemen Beasly warned that his underfunded organization may be forced seek hundreds of millions of dollars in private donations in a desperate bid to stave off widespread famine in the coming months. Beasley told The Associated Press in an interview Wednesday March 10, 2021, that conditions in war-wrecked Yemen are “hell.” (AP Photo/Sam Mednick, File)

The head of the U.N. food agency warned after a visit to Yemen that his underfunded organization may be forced seek hundreds of millions of dollars in private donations in a desperate bid to stave off widespread famine in coming months, describing conditions in the war-stricken nation as “hell.”

The World Food Program needs at least $815 million in Yemen aid over the next six months, but has only $300 million, the agency's executive director, David Beasley, told The Associated Press in an interview. He said the agency would need another $1.9 billion to meet targets for the year.

Beasley visited Yemen earlier this week, including the capital of Sanaa which is under the control of Iran-backed Houthi rebels. He said that at a child malnutrition ward in a Sanaa hospital he saw children wasting away from lack of food. Many, he said, were on the brink of death from entirely preventable and treatable causes, and they were the lucky ones who were receiving medical care.

He said the world needs to wake up to how bad things have gotten in Yemen, particularly for the country’s youngest, some of whom he had seen in hospital beds in the Sanaa hospital.

“In a children’s wing or ward of a hospital, you know you normally hear crying, and laughter. There’s no crying, there’s no laughter, there’s dead silence,” he said late Tuesday, speaking to the AP by video conference from Addis Ababa, Ethiopia, where he had just landed from Yemen.

“I went from room to room, and literally, children that in any other place in the world would be fine, they’d might get a little sick but they’d get recovered, but not here.”

“This is hell," he said. “It’s the worst place on earth. And it’s entirely man-made.”

The U.N. has warned that 16 million people in Yemen — or about half the population — could face serious food insecurity. Half a million people already live in famine-like conditions, in what aid organizations have called the world’s worst humanitarian crisis. Some 400,000 children are in need of immediate assistance to save their lives from deadly malnutrition. Worsening fuel shortages could throw millions more into deep poverty.

Since the outbreak of Yemen's civil war six years ago, U.N.-led aid efforts have been chronically underfunded. This year's global fundraising drive came up short as well — more so than in previous years — because aid dollars have been shrinking as a fallout from the coronavirus pandemic.

A pledging conference last month raised a little more than half from the international community of what was needed to continue food aid services for the next year.

Yemen, already the Arab world’s poorest country, has been caught in a grinding war since 2014 when the Houthis descended from their northern enclave and took over Sanaa, forcing the internationally recognized government to flee. In the spring of 2015, a U.S.-backed, Saudi-led coalition began a destructive air campaign to dislodge the Houthis while imposing a land, sea and air embargo on Yemen.

Throughout the conflict, humanitarian agencies have faced obstacles in getting aid to those who need it most, particularly in Houthi-controlled territories; obstruction, distrust and fighting have played a role.

Beasley said his organization has made gains on these fronts particularly in access and accountability with the Houthi authorities, and now the obstacle is simply a lack of funding.

“We’ve turned a corner with the Houthis… in terms of cooperation, collaboration,” he said.

He touted a new program by which recipients of a cash aid program are verified via a biometric system to assure it goes to the right people. It’s a scheme the organization plans to scale up, if they can get more funding.

It remains unclear where more money might come from. Beasley predicted more catastrophes in 2021 if world leaders do not prioritize helping the most vulnerable countries including Yemen, Afghanistan, the Democratic Republic of Congo and Syria.

“About May, June, July, if we don’t have massive amounts of monies put into these places, you’re going to have mass starvation, mass destabilization and mass migration,” he said.

One source of funding for Yemen could be a new anonymous aid fund. Beasley confirmed media reports of the Famine Relief Fund, created by wealthy private donors, and said some of the them could be from the United States and the Gulf. He said the WFP was already in talks with the fund. He would not elaborate.

Earlier this month, the aid industry-focused publication The New Humanitarian reported on the emergence of the Famine Relief Fund, created by anonymous benefactors to help address Yemen's crisis, and wrote that it was already in talks with UN agencies and other aid groups.

Beasley said he has already been reaching out to the world’s billionaires to get them to contribute somehow. So far, the only stipulation that came with the money from the new anonymous fund would be that it go to those who are teetering on the edge of famine, he said.

“My God, I’m going to take any dollar I can get from anywhere in the world to save the life of a child right now,” he said.

Beasley repeated calls that the war needs to be brought to a halt, though the situation on the ground in Yemen is poised for a new escalation, as Houthi and government forces battle for the oil-producing province of Marib. Fighting there has displaced 15,000 people in the last month, many of whom had already fled the conflict in other areas, according to the U.N. migration agency.