Help wanted: Lamont turns to outside experts to fight virus 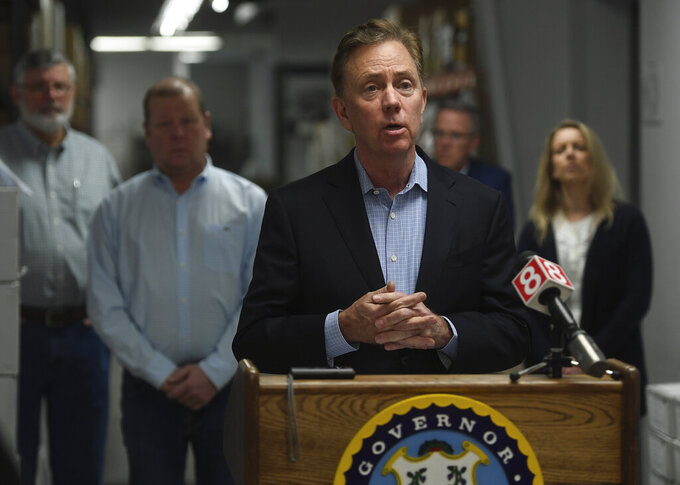 FILE - In this March 29, 2020, file photo, Connecticut Gov. Ned Lamont addresses the media at medical equipment manufacturer Bio-Med Devices in Guilford, Conn. On Thursday, July 2, 2020, Lamont announced a change to the required 14-day quarantine for visitors from states with high COVID-19 infection rates. He believes the quarantine announced the week before by Connecticut, New Jersey and New York has limited the number of Connecticut's out-of-state visitors. (Brian A. Pounds/Hearst Connecticut Media via AP, File)

HARTFORD, Conn. (AP) — Connecticut Gov. Ned Lamont, a businessman-turned-politician, mid-way into his first term, did what felt natural when he faced the prospect of large numbers of coronavirus infections spreading from neighboring New York into his state.

Lamont tapped people from the business world, his alma mater Yale University and personal relationships, including his successful venture capitalist wife Annie, to find some star power advice on how to respond to a global pandemic.

“I am so much better as a governor for all the help that they provide and their constructive help,” Lamont said during a recent interview with The Associated Press. “Most people criticize from the sidelines and say, ‘No. These guys say here’s the best way to do it today. And tomorrow they may change their mind.’ I know that’s a high crime and misdemeanor in the public sector, but this is a fast-changing train.”

Lamont’s decision to look beyond state government for help with the pandemic has been praised by those who point to Connecticut’s current, and enviable, infection rate of less than 1%. But his out-of-the-box approach, a hallmark of his leadership style, has also drawn push-back from critics who’ve accused him of not being inclusive or transparent enough.

The union representing nursing home workers, the New England Health Care Employees Union, SEIU 1199NE, repeatedly complained that front-line workers were not a part of Lamont’s reopening committee, while some legislators said they thought members of the General Assembly should have had a formal role as well.

Meanwhile, Len Fasano, the GOP leader of the Connecticut Senate, has faulted Lamont with not keeping the General Assembly in the loop as much as he’d like during the pandemic.

“If he wants to get advice from people in the field, I don’t have a problem,” Fasano said. “All I’m saying is, you can take the information you want to take, but you need to come back to the Legislature ... He needs to talk to us, explain to us why he thinks this is the right way.”

Other governors have also sought out well-known public health experts for advice during the coronavirus pandemic. In New Jersey, for example, Democratic Gov. Phil Murphy tapped a former Princeton University president and the CEO of pharmaceutical giant Merck to lead his reopening commission, which also included former Fed chairman Ben Bernanke among its members. Like Lamont, Murphy’s panel was initially criticized for not being inclusive enough.

This isn’t the first time Lamont has looked outside state government to help fix a major problem. The governor in 2019 embarked on a now-failed partnership with a foundation bankrolled by the billionaire hedge fund manager Ray Dalio to help address educational inequities. But the initiative ultimately fell apart this May, during the height of the pandemic, amid continuing controversy over the decision to exempt it the state’s open records laws.

“The Dalio partnership and the reopen Connecticut panel were both established without any public scrutiny or oversight and operated without any transparency. Ultimately, they both suffered from an erosion of public trust,” Klarides said at that time.

Lamont, who often makes the argument he’s an outsider who came to Hartford to change how Connecticut does business, bristles at criticism over involving outside experts and philanthropists in state government matters.

“Somebody called them a bunch of corporate talking heads, which I didn’t think was all that helpful,” Lamont said.

When he announced on the state Capitol steps back in May that the Dalio partnership was ending, he made a point of defending his decision to involve the “best and the brightest” in Connecticut’s fight against the pandemic.

“We have amazing state employees, but we can’t be experts on everything,” said Lamont, who filled many of his top cabinet jobs with former business, including his COO Josh Geballe who spent 11 years at IBM and now oversees everything from COVID-19 testing to procurement of personal protective equipment.

“If we have the opportunity to get some of the best academic thinkers in the country, if we have the chance to get people who’ve devoted their lives to infectious diseases, we have business people large and small,” Lamont said, “I thought that would better inform our strategy going forward and give you confidence that we are doing the public health piece of the COVID crisis in the most serious way possible to keep you safe.”