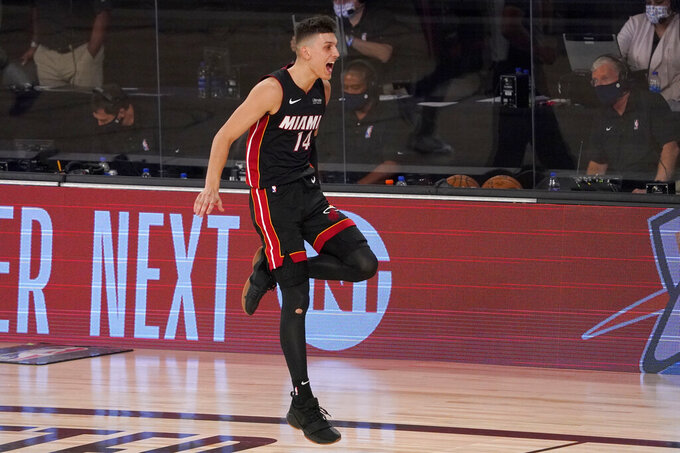 LAKE BUENA VISTA, Fla. (AP) — The secret can be told now: When the NBA was shut down for a few months because of the coronavirus pandemic, when most players in the league didn’t have a place to play because team facilities were closed as a precaution, Miami guard Tyler Herro was in a gym all the time.

A couple of hours in the morning. A couple more at night. Almost every day.

“I don’t think the Heat even know I did this,” Herro told The Associated Press.

Given the way he’s played since the season resumed, the Heat probably could have suspected he used his downtime wisely. No rookie in these playoffs is averaging more points (14.7), 3-pointers (2.3), assists (3.3) and minutes (32.3) per game than Herro, the baby-faced 20-year-old who’ll make his Eastern Conference finals debut when Miami opens its series against the Boston Celtics on Tuesday night.

Herro averaged 16.5 points in the first round of the playoffs, the most by a Heat rookie in a first round ever. And in the second round, he became just the second Miami rookie to average double-digits in scoring — Dwyane Wade being the other.

“He doesn’t leave it to chance,” Heat coach Erik Spoelstra said. “For a young kid, he’s pretty relentless with his work ethic and his consistency.”

Exhibit A: finding a gym during a pandemic, something a lot of veterans couldn’t even pull off.

The gym access came through many fortunate breaks. Herro changed residences during the pandemic, and his new place was near a high school gym. His agent knew somebody who knew somebody, and before long, Herro was spending mornings and nights working on everything.

“We weren’t supposed to be in the gym, but I had a mask on the whole time,” Herro said. “I just kept it off social media for the most part, put my head down and went to work. I lived in the gym. We went to work and the whole time I was hoping that I would be on a platform like this, be on the big stage and be ready to go.”

He’s had that mantra since draft night.

Herro was the 13th pick in the 2019 draft. The Heat had him ranked higher than that; he was the highest name left on their list when their turn to be on the clock rolled around, so it was a no-brainer to Miami to select Herro out of Kentucky.

The kid impressed from the jump: 14 points in his first game, 14 more in his second, 29 in his fourth. That’s when the public probably started becoming aware, or maybe in December, when he made a stepback transition 3-pointer for the lead late in regulation in a game Miami rallied to win over Philadelphia in overtime.

Internally, Miami knew what it had in Herro long before those games.

Heat forward Jimmy Butler invited Herro to work out with him in Chicago about a month before training camp. Butler had two motives: He wanted to show Herro the ropes, but he also wanted to see if the rookie could be someone worthy of his trust. They woke up before sunrise to play some medicine ball volleyball game on the beach. Butler won every game. But the rookie showed what Butler wanted to see.

The worst part of the season was when Herro couldn’t work.

He started dealing with a lower-leg injury in February and missed 15 games, coming back for the first time on March 11 — the night the league shut down. And then came another problem: Herro eventually learned that he had COVID-19, after testing positive for the antibodies.

“I was sick for a week or two,” Herro said. “My chest was hurting really bad. I had it right when the season shut down.”

He dealt with that. He dealt with moving to Miami as a teen and beginning to live largely on his own; he’s got one of his longtime close friends living with him, an older-brother type who isn’t afraid to give him sharp criticism when needed. He’s learning about how to function in a torn world, with racial injustice at the forefront of so many conversations now, especially within the NBA.

He’s learned lessons from veterans inside his locker room and even opponents; Houston’s Russell Westbrook pulled him aside in a preseason game to tell him that he would have to play defense in the NBA, words that Herro took to heart.

He’s managed every challenge so far. And now comes the biggest on-court test yet: he East finals.

“I expected this, always,” Herro said. “I put in a lot of work and you always want to see results from your work. The results might have come kind of fast, but that’s how much work I put in for this.”