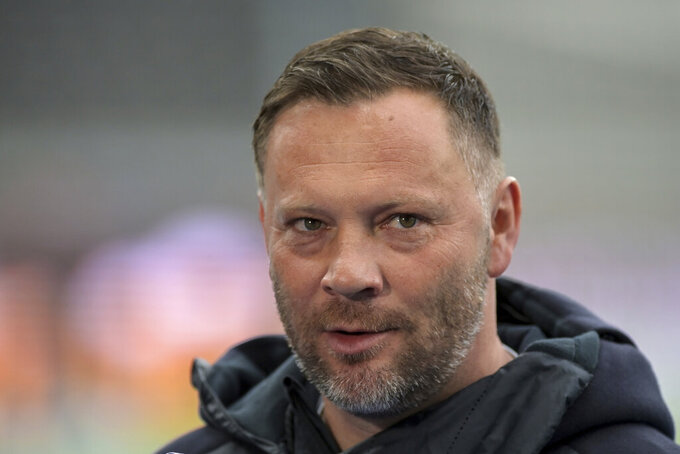 Berlin's coach Pal Dardai arrives for the German Bundesliga soccer match between Hertha BSC Berlin and Borussia Moenchengladbach at the Olympic stadium in Berlin, Germany, Saturday, April 10, 2021. Hertha Berlin coach Pal Dardai has tested positive for the coronavirus along with one of his assistants and forward Dodi Lukebakio. (Soeren Stache/Pool via AP)

BERLIN (AP) — Hertha Berlin's next three Bundesliga games have been postponed after the entire team was ordered into quarantine because of a coronavirus outbreak.

The German Football League said Friday that it'll soon announce new dates for the games against Mainz on Sunday, Freiburg on April 21 and Schalke on April 24.

That will mean a frantic schedule of games next month for Hertha, which is 15th in the 18-team league and trying to avoid relegation. Six rounds of games remain to be played. Fitness will be a concern with the players training on their own during the quarantine period.

“These will be six challenging games and this is an extreme situation which none of us has experienced before,” said Hertha sporting director Arne Friedrich.

Berlin health officials ordered the whole team into a 14-day quarantine at home on Thursday after head coach Pal Dardai, one of his assistants and two players tested positive for the coronavirus. Goalkeeper Rune Jarstein also tested positive earlier this month.

The players and staff who tested positive “are doing well considering the circumstances,” CEO Carsten Schmidt said. He added that the club was sending exercise bikes and treadmills to the players' homes so they could follow club training plans.