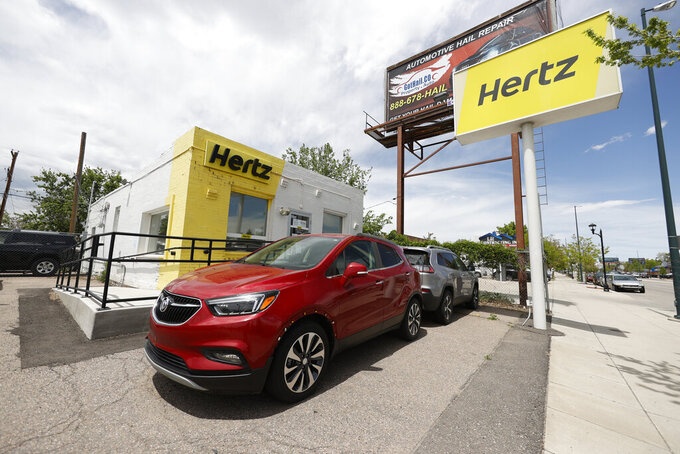 This May 23, 2020, photo shows rental vehicles parked outside a closed Hertz car rental office in south Denver. Hertz said Wednesday, June 17, it has put its plans to sell $500 million worth of stock on hold because the offering is being reviewed by the Securities and Exchange Commission. (AP Photo/David Zalubowski)

Hertz said Wednesday it has put its plans to sell $500 million worth of stock on hold because the offering is being reviewed by the Securities and Exchange Commission.

Trading in shares of the car rental company, which filed for bankruptcy protection last month, were halted before the announcement. The stock later resumed trading.

Hertz Global Holdings Inc., which is based in Estero, Florida, said Monday that it received approval from bankruptcy court to proceed with the stock sale. The sale would be an unusual move for a company in the throes of a bankruptcy reorganization and a very risky proposition for investors.

The company warned that investors who buy its shares face “substantial risks” that the stock they bought might be rendered worthless.

Under a Chapter 11 restructuring, creditors have first dibs on any assets, and typically have to settle for less than full repayment. For people who have bought the company's stock to have any chance to recoup their investment, Hertz would have to somehow repay its creditors in full first.

Investors would have to bet that the economy will rebound from the coronavirus downturn quickly and that Hertz's business would improve dramatically so that it could afford to pay off its creditors and exit bankruptcy successfully.

Despite such long odds, shares in Hertz have doubled this month. The stock rose 2.6% to $2 Wednesday.

That shares in a company in bankruptcy would be climbing reflects the optimism among some investors that the economy will recover swiftly as businesses reopen. The stock market has staged a furious comeback after being down nearly 34% in March when worries about the recession were peaking. Since then, the S&P 500 index is about 40% higher.

Starting in mid-March, Hertz — whose car-rental bands also include Dollar and Thrifty — lost virtually all its revenue when travel shut down due to the coronavirus. By the end of the month, Hertz shed 12,000 workers and put another 4,000 on furlough, cut vehicle acquisitions by 90% and stopped all nonessential spending. Unable to raise money on the capital markets, Hertz began missing payments to its creditors in April.

All told, the company entered bankruptcy protection with more than $24 billion in debt by the end of March, leaving it only with $1 billion of available cash.