He's fought COVID-19 for months. Can he ever really beat it? 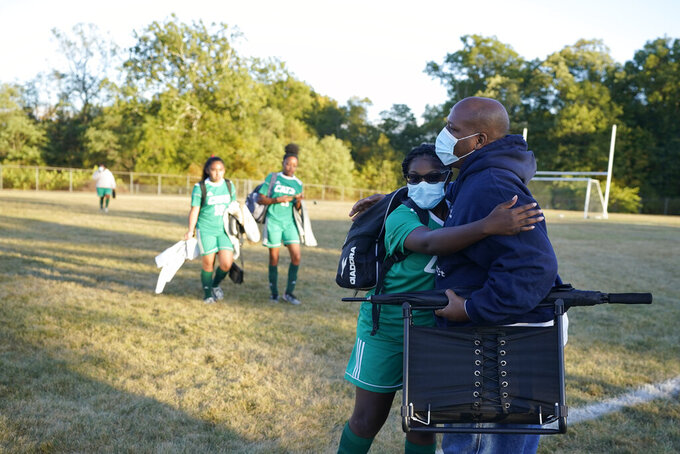 INDIANAPOLIS (AP) — Larry Brown had been on a ventilator for 37 days. Nurses periodically turned the 45-year-old former Indiana State football player onto his stomach to help him breathe. Brown’s lungs were filling with fluid, and doctors didn’t expect him to last.

As visitors weren’t allowed in the intensive care unit, a nurse placed a phone next to his ear.

“Thank you for fighting so hard, Larry,” his sister-in-law, Ellie Brown, told him. She was careful not to say goodbye. That might scare him.

Like millions of COVID-19 cases, Brown’s had started with minor symptoms. When he fell ill in mid-March, people in the U.S. were becoming familiar with the novel coronavirus. Businesses were starting to shutter — but only until the country could flatten the curve, nearly everyone thought. And most cases weren’t severe, officials said.

Turns out, neither was Larry.

After that phone call, Brown slowly improved. He'd remain on the ventilator for nearly two more weeks, for a total of about 50 days. But coming out of the medically induced coma was only the beginning of Brown’s recovery.

There's no end in sight to a rehabilitation that already has lasted months. His hands — which helped make him Indiana State's eighth all-time receiving leader — can’t even open a Pepsi can. He didn’t die of the virus, but life may never be the same.

Brown doesn’t know exactly when he first felt symptoms. Around March 15, he started struggling to focus at work. He didn’t have a cough like many coronavirus patients, but he did lose his appetite. The 5-foot-9-inch, 240-pound man knew that was a sign.

He was hearing more about the virus. Schools and sports leagues began shutting down. Indiana would soon order residents to stay home unless they had to go to work, the doctor or an essential business.

Brown called his doctor, who told him to quarantine. He hunkered down, and his mom dropped off meals.

On March 25, an exhausted Brown called his mom for help. Marilyn Brown dialed 911, and an ambulance took her son to the hospital.

Brown's spirits rose over the prospect of help. As he rested in his room watching TV, he thought he'd stay a few days.

Soon, though, he was moved to another room — he wasn’t sure why.

Doctors moved Brown to the ICU and started him on the ventilator while grappling with how to treat him. They put him in a medically induced coma, and attached him to an ECMO machine, which did the job of his lungs by transferring oxygen into his blood.

As April ended, Brown’s condition grew worse. A dangerous MRSA infection set in. Despite the no-visitors rule, staff feared Brown had little time and let his mom and one of his three daughters see him.

Brown wouldn’t recall that emotional visit, or his sister-in-law's phone call. Those weeks seem like a black hole, lost time where all he remembers is nightmares: He was in a different hospital, and staff there wanted to kill him.

Doctors aren’t sure why Brown started to improve. Dr. Rajat Narang, a critical care doctor and lung specialist, suspects the ECMO machine saved his life. An antibiotic adjustment may have helped.

Whatever the reason, Brown woke up May 10, a day before his 46th birthday.

Brown couldn’t walk or speak. He could barely scribble. Hospital rehabilitation began right away. He had to build strength in his legs to stand, then to try a few steps, and climb some stairs. Making it to the top felt like climbing Mount Everest.

The work made him sore and reminded him of football training camp. But that soreness faded as seasons progressed.

On June 12, he left the hospital, ambling through a group of applauding employees and into a foreign world. Everywhere he went, people wore masks. Businesses closed early if they opened at all. Grocery prices had jumped; stores had new traffic patterns.

He doesn’t know if the tingling sensation in every finger except his pinkies will ever go away and allow him to type without shooting pain.

He doesn’t know when he’ll be able to return to his job as a business analyst with health insurer Anthem.

He doesn’t know if he'll play basketball with his kids again or if he’ll live with a permanent disability.

He says he's blessed to be alive but estimates he’s at 40% of his pre-coronavirus self.

Brown’s doctors have unanswered questions, too. COVID-19 has disproportionately affected African Americans like Brown; what role might that have played? Brown isn’t diabetic; he doesn’t smoke. Why did his case grow so severe — why did he become what some call a “COVID long-hauler”?

Winter is coming, and flu season. A national election looms. Then come holidays, with some families determined to have “normal” celebrations.

Some states have fully reopened restaurants, bars and other businesses. Thousands of self-identified long-haulers are sharing their stories and getting informal advice via social media — how many more would come from a second wave of the virus?

Brown doesn't wish this on anyone.

He left the hospital nearly four months ago, yet still has to stretch his hands and legs, which stiffen frequently. He's regularly at therapy and neurology appointments. He struggles to get out of his deep sofa. His kids chop ingredients when he cooks. His 12-year-old daughter, Justys, lifts the tab on his Pepsi cans.

Brown isn’t sure how far recovery will take him. His kids giggled and thumped around upstairs as he searched for words.