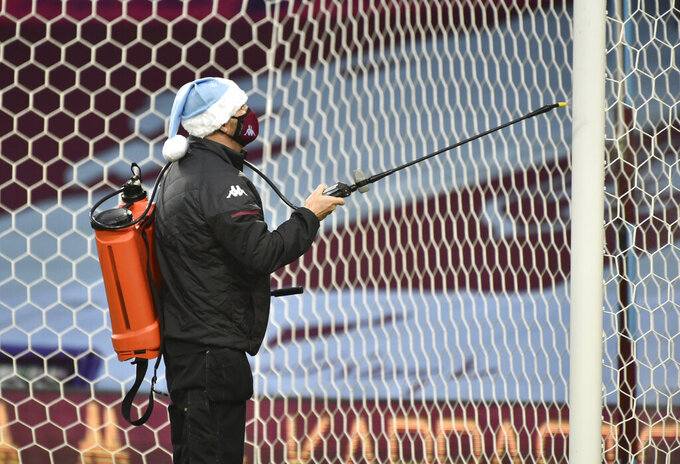 Coronavirus outbreaks at English soccer clubs have raised concerns about games continuing, with the highest number of positive tests across Premier League clubs in a single week — reflecting a sharp rise in infections across the country.

There were 18 positives after 1,479 tests on players and club staff from Dec. 21-27, the Premier League said Tuesday, sparking calls to suspend the competition like last season.

“When I listen to the news the variant virus transmits quicker than the original virus, we can only do the right thing which is have a circuit break," West Bromwich Albion manager Sam Allardyce said after a 5-0 loss to Leeds. “I am 66 years old and the last thing I want to do it catch COVID. I’m very concerned for myself and football in general. If that’s what needs to be done we need to do it.

“We had one positive this week and it seems to be creeping around no matter how hard we try.”

An outbreak among players and staff at Manchester City led to Monday's game against Everton being postponed and the training ground closed.

But Sheffield United's game did go ahead on Tuesday despite players and backroom staff having the coronavirus.

“I want to play, that’s how it is — we are not looking to get anything canned,” Sheffield United manager Chris Wilder said before a 1-0 loss to Burnley. “It’s not an ideal situation but we are not in a club of one. It’s picking up and running through football clubs.”

Virus cases have also been reported at Fulham, which is due to play Tottenham on Wednesday, and Arsenal, whose defender, Gabriel, is isolating.

Southampton manager Ralph Hasenhüttl missed Tuesday's 0-0 draw with West Ham after a member of his household tested positive for COVID-19.

The league was testing players and staff twice a week last season, but reduced that to once a week this campaign. However, after the government expressed concerns two weeks ago about a new, more transmissible variant of the virus that was first identified in southeast England, clubs around London started testing twice weekly again.

The previous highest number of coronavirus cases after weekly testing in the Premier League was 16 last month.

The first wave of the pandemic led to the Premier League being paused from March to June last season. This season had been spared disruption since it began in September until two games were called off this month.

The rise in infections reflects the growth in coronavirus cases across Britain, where the death toll since the pandemic erupted in March is over 70,000. More than 50,000 cases were reported in a single day for the first time on Tuesday, and the number of hospitalized COVID-19 patients has surpassed the first peak of the outbreak in April.

The return of fans to stadiums has already been rolled back with Liverpool and Everton the only Premier League clubs allowed 2,000 spectators.

The spread of infections is particularly impacting the lower professional divisions, with seven out of 12 games in League One on Tuesday postponed. Medics at eastern club Ipswich and northwest side Rochdale have called for the competition to be halted.

Rochdale club doctor Wes Tensel is particularly concerned about players traveling while the country is subject to varying coronavirus restrictions, which in London are closer to a lockdown.

“If the government were to put us in another lockdown like we had with the very first one where it was just essential travel, then football should also stop as well," Tensel said. “If they carry on with tiers, the fact that everything the government have done so far the cases are still increasing, I would have thought football probably should be postponed.

“Footballers traveling around the country are not causing spikes in different tiers but they can still pass it on to their loved ones because the football bubble they are in bursts every time they go home."