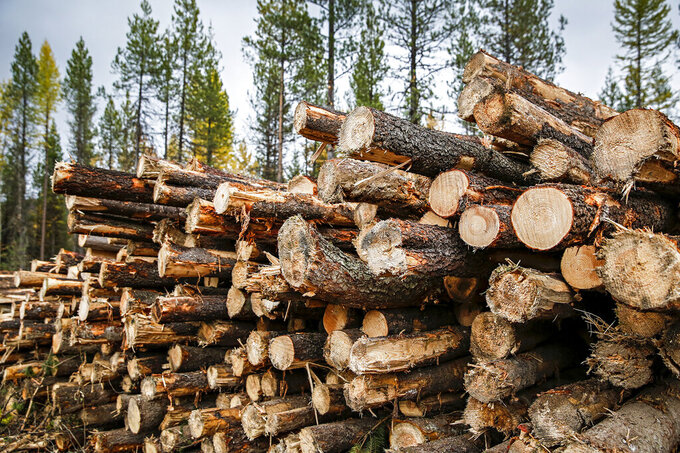 A timber harvest operation is seen southeast of Martin City, Mont. near the Hungry Horse Reservoir on Oct. 17, 2019. Prices for logs used in timber are reaching record levels amid the pandemic. (Hunter D'Antuono/Flathead Beacon via AP)

“The product demand has increased dramatically in general forest products,” he told the Flathead Beacon.

According to the University of Montana Bureau of Business and Economic Research sawlog report, Western Montana’s price per thousand board feet (MBF) for Douglas-fir sawlogs reached $407 in the third quarter, which stretches from July to September, compared to 2019’s Douglas-fir prices at $393 per MBF. Lodgepole pine sawlogs reached $409 per MBF this year compared to $393 last year.

McKenzie said the market was lagging earlier in the year before the uptick of the last few months.

“We don’t know exactly why the demand is there,” McKenzie said. “Part of it is because it’s in a commodity market and as the demand increases you see a corresponding increase in production.”

McKenzie speculates the nationwide timber production has been impacted by the pandemic and wildfires, creating a scarce supply and a hike in prices. But since Montana’s production has been uninterrupted throughout the pandemic, the state’s wood product industry is taking advantage of the high market prices. He also noted the influx of building in the valley.

McKenzie says Stoltze has been especially busy in the last three months and has increased production at its mill in Columbia Falls. Even though production has increased, it is still restrained by log supply with a limited access to timber.

“They don’t last long,” McKenzie said about the market prices. “Prices are highly volatile and we’re anticipating there will be an adjustment in prices.”

In addition to high wood product demand, F.H. Stoltze is receiving a lot of inquiries from people who are interested in buying the company’s timberlands. While Stoltze has one or two parcels for sale, the company does not intend to sell most of its timberland, McKenzie said.

With a 39,367-acre tree farm, the company is continuing to expand the business with both its timberland and sawmill. Stoltze is Montana’s oldest lumber company, which was established in 1912 and began sawmill production in 1923 at the Halfmoon site in Columbia Falls. The company annually produces 65 to 70 million board feet.

Weyerhaeuser, too, reported experiencing “strong results” with net earnings of $72 million during the second quarter, down from last year’s earnings of $128 million. However, the company’s Earnings Before Interest, Taxes, Depreciation and Amortization (EBITDA) was $386 million compared to $343 million, according to a press release announcing the second-quarter earnings report.

Weyerhaeuser’s third-quarter earnings report won’t be released until the end of this month, but the company was forecasting higher earnings and Adjusted EBITDA with increased product sales.

The wood product market rebounded after experiencing a sharp decline in early spring in response to the pandemic. Weyerhaeuser reduced production volumes to compensate for the lower customer demand in the spring, but continued to adjust operating rates as the market improved.

Weyerhaeuser closed its plywood mill in Evergreen for a week in early April in response to the drop in demand.

Weyerhaeuser uses primarily Douglas fir and Western larch and owns or manages 11 million acres of timberlands in the U.S. It’s one of the largest manufacturers of wood products in North America.