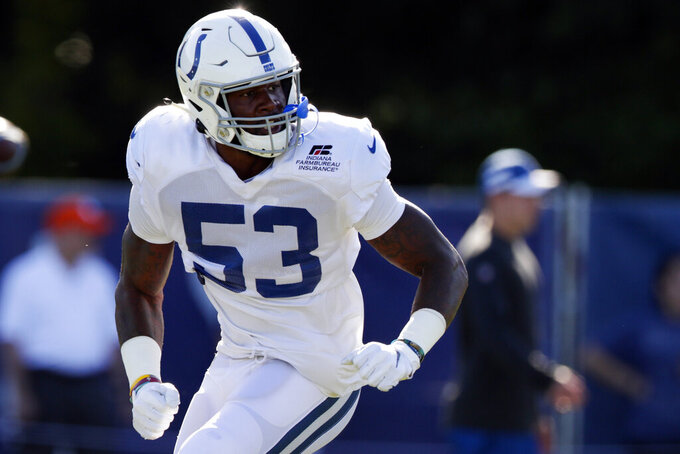 FILE - In this July 31, 2019, file photo, Indianapolis Colts outside linebacker Darius Leonard (53) runs a drill during practice at the NFL team's football training camp in Westfield, Ind. Leonard works relentlessly at his rural South Carolina home to prepare for another football season. He's also wary of pushing too hard, knowing a minor injury could become a major setback given the dearth of medical experts in his area. So when in doubt the Colts star confers with his coaches, who are creating safer, more efficient individual workout programs based on data collected the past few weeks. All part of a changing NFL world: high-tech devices supplanting old-school creativity. (AP Photo/Michael Conroy, File)

INDIANAPOLIS (AP) — Darius Leonard works relentlessly at his rural South Carolina home to prepare for another football season. He's also wary of pushing too hard, knowing a minor injury could become a major setback given the dearth of medical experts in his area.

So when in doubt, the Indianapolis Colts star confers with his coaches, who are creating safer, more efficient individual workout programs based on data collected the past few weeks.

It's all part of a changing NFL world: high-tech devices supplanting old-school creativity.

“We are getting a ton done," Colts coach Frank Reich says. “With the technology today, they all have heart rate monitors, so they do their workouts, it’s all logged, it all kind of shoots to our system. This isn’t, ‘Hey, I’m watching you.’ This is, ’Hey, I’m interested in you.' I’m a little bit of a numbers guy, so I like to see these charts. Then I’ll show them to the team."

That fits neatly into the new guidelines for this year's revamped offseason program, too.

Teams can conduct classroom instruction and on-field activities through Zoom meetings or similar apps instead of at their facilities. They can meet virtually as much as four hours per day, four days per week.

Players also can voluntarily wear monitors to track workouts. Teams can send up to $1,500 to each player to purchase equipment.

Not everyone has followed the same script. New Orleans canceled its offseason program. But the Colts are taking advantage of their allotted time. Reich estimates Indy spends half its time in meetings and the rests monitoring workouts.

Technological advances are helping everyone cope with the COVID-19 pandemic.

“I understand a lot more about the NFL now than I did 10 years ago," new Dallas Cowboys backup quarterback Andy Dalton said, comparing the difficulty he faced during the 2011 lockout with today's circumstances. “So I guess the advantage now is there’s still these virtual meetings, so you’re able to connect and talk through the offense and talk through different things, stuff that I didn’t have my rookie year during the lockout."

“Obviously, I’m pretty sure there was someone in the car to hit the brakes in case he slipped," Patricia said. "I go to safety first. I mean it’s a Jeep, so once you get it moving, the ball bearings kick in and the tires go. Some of that, I was busting his chops about."

Companies such as WHOOP and Myzone could become game changers even after things return to normal.

WHOOP, an online fitness company, partners with the NFLPA to provide wearable monitors for players. Nearly 1,000 players have used the service over the past three years as well as teams from Major League Baseball, the NBA, NFL and Major League Soccer.

The waterproof device can be worn around the wrist or bicep and tracks heart rate and strain during workouts and recovery periods. In addition to measuring heart rate variability, resting heart rate and respiratory rate, it provides information about sleep performance to give coaches the necessary information to ensure safe, efficient workout plans that won’t overstress the body.

“If you go too far and keep training in a state where you’re not recovered, you’re not making physiological gains at that point. You're just digging a hole," said vice president of performance Kristen Holmes, a former U.S. national field hockey player and NCAA title-winning coach at Princeton. “It’s not about more and more and more. It's about being smart and managing load."

The results may even help in the fight against COVID-19. WHOOP has information showing customers who tested positive saw a spike in their respiratory rates just a few days before the onset of symptoms.

Zebra Technologies has been using radio frequency identification chips in shoulder pads and practice shirts since 2014. Now it has installed them in footballs. Transmitters at stadiums and practice fields send data that company officials say track measurements within 6 inches of actual distance.

The results often appear on television broadcasts: how far or fast a player ran; how far a ball was thrown; or how much separation a receiver had from a defender. Those numbers came in handy when most pro days were canceled because of the pandemic.

“Not only did we track the Senior Bowl game, but we tracked all of the practice sessions. We captured all of the player information that week," said John Pollard, vice president of Zebra sports business development. “The teams apply it as a tool like any other training process or mechanism they may have in place. It can help with things like rehab, too.”

But without the radio transmitters, Zebra cannot track workouts at home. WHOOP and Myzone still can, and their numbers help players like Leonard, a 2018 All-Pro, return to football healthy and prepared.

“I’m not going to say I can get enough out of it, but I can get a good bit," Leonard said of his modified regimen. “It sucks being from the country where you don’t have a chiropractor, you don’t have a physical therapist who can actually work on you day in and day out. So with me, a guy who loves to train hard and run fast every day, I can’t do that now because if I tweak something I have no one here to help me out. So I really have to take my time and kind of do all the small things right."