Highlights of the Wisconsin state budget 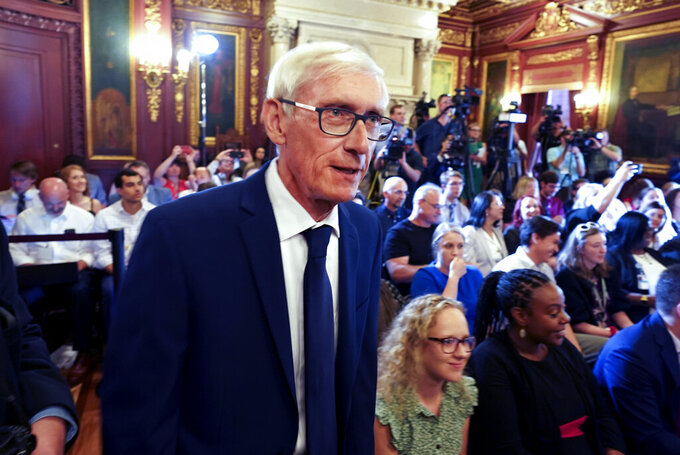 FILE - In this July 3, 2019, file photo, Wisconsin Gov. Tony Evers arrives to sign the budget at the State Capitol in Madison. How much and what taxes to cut is one of the largest remaining questions for the Legislature's budget-writing committee to tackle this week as it nears the end of its work writing the state budget. The Republican-controlled panel hopes to complete its work on Thursday, June 17, 2021. (Steve Apps/Wisconsin State Journal via AP, File)

MADISON, Wis. (AP) — How much and what taxes to cut is one of the largest remaining questions for the Legislature's budget-writing committee to tackle this week as it nears the end of its work writing the state budget.

The Republican-controlled panel, which is hoping to complete its work on Thursday, has dramatically scaled back the two-year spending plan from what Democratic Gov. Tony Evers proposed in February.

Once passed by the committee, the Senate and Assembly will vote on the budget, perhaps as soon as the last week of June. It would then head to Evers who has broad line-item veto authority.

Here are some highlights of the budget as it currently stands:

Republicans have promised a tax cut as large as $4 billion, thanks to rosier revenue projections. The committee has also yet to decide on how much to pay for expanded broadband internet services for rural parts of the state. Both decisions are expected on Thursday.

Wisconsin public schools would receive an additional $128 million in state funding over two years, which is less than 10% of the $1.6 billion that Evers proposed. Republicans defended the move, noting that Wisconsin schools are slated to receive $2.6 billion in federal coronavirus relief money. However, nearly all of that is in jeopardy unless the state spends nearly $400 million more on schools than is currently in the budget.

The budget would reimburse 30% of special education costs in the second year of the budget, up from 28.2% under current law. Advocates say that is woefully inadequate. The Evers budget would increase reimbursement to 45% in the first year and 50% in the second.

The eight-year-old tuition freeze would end next fall under the budget. UW schools would also receive just an $8.25 million increase in funding, compared with the $192 million Evers proposed.

There are no gas tax or vehicle registration fee increases. The budget authorizes the start of the oft-delayed Interstate 94 expansion project in Milwaukee County as Evers wanted. State funding for transit programs was cut in half in Milwaukee and Madison, but Republicans said that was because of hundreds of millions of dollars in federal coronavirus relief money the cities are receiving.

State building projects would receive $1.5 billion in funding, which is roughly $810 million less than what Evers wanted. The UW System would get about $629, down from the $1 billion Evers put forward.

Wisconsin's land stewardship program would be extended for another four years, rather than 10, as Evers wanted. The budget also makes $32 million a year available to acquire land, the same as it is now, but down from $70 million as Evers proposed.

The budget includes more money for vocational training for the disabled, and youth and adult apprentice programs with the goal of addressing the state's worker shortage problem. However, Republicans rejected Evers' call to spend $15 million to improve the system for administering unemployment payments. Republicans said Evers can use federal stimulus money for that.

Funding to pay for body cameras for Wisconsin State Patrol officers and Department of Natural Resources wardens is included, but funding was rejected for state Capitol police officers.

A mental health center in Madison will be expanded to reduce the number of inmates at the state’s juvenile prisons, but Republicans did not include funding to build a new juvenile prison in Milwaukee County. Instead, only money for the planning process was included, a move Democrats said would delay the closure of the troubled Lincoln Hills and Copper Lake juvenile prisons north of Wausau.

Teen drivers could opt out of taking a behind-the-wheel exam under a permanent policy that was tested during the coronavirus pandemic last year. To qualify, the driver must be applying for a non-commercial driver’s license, successfully completed a driver education course that includes 30 hours of behind the wheel driving experience and not have any moving violations within six months of applying. An adult must also consent to waiving the test.

Evers' proposals to legalize recreational and medical marijuana, expand Medicaid and restore collective bargaining rights for public workers were among the first items killed by the legislative committee. Also removed in one vote striking out nearly 400 Evers proposals were $1 billion in higher taxes on manufacturers and capital gains; increasing the minimum wage to $10.15 per hour by 2024; suspending enrollment in the private school voucher program; and creating a so-called red flag law that would allow guns to be seized from people deemed to be a danger by courts.