Hinchcliffe back at Indy 500 with plenty riding on outcome 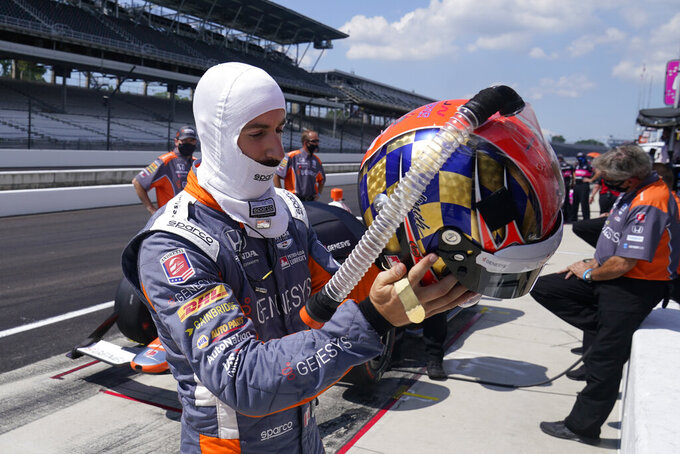 The self-proclaimed mayor of Hinchtown is back at Indianapolis Motor Speedway, where he nearly lost his life in a horrific practice crash for the Indy 500 only to return the following year and lord over the 33-car field by winning the pole.

He is back walking the familiar steps under the shadow of the famed pagoda, and taking the well-worn left-hand turn into Gasoline Alley. He is back to sliding into the cockpit of an IndyCar, rather than the plush seat of the broadcast booth. He is back where he belongs, where he feels most normal, even during this most abnormal of years.

“It feels great to get back to my real job,” says James Hinchcliffe, the popular Canadian who lost a full-time ride with Schmidt Peterson Motorsports after last season and is driving an extra car in Sunday's race for powerhouse Andretti Autosport.

Hinchcliffe's ease behind the microphone, coupled with his natural charm and good looks, have made him an instant hit on NBC broadcasts of IndyCar this season. It was a side gig that he picked up when his old team decided to field cars for Oliver Askew and Pato O'Ward, a pair of promising young rookies, something to the pass the time between his own races.

He signed a three-race deal with the Andretti team, and one of those happens to be the 104th running of the Indy 500.

It is a race at a track that has given some of Hinchcliffe's highest highs and lowest lows. He nearly won an Indy Lights race at the famed Brickyard more than a decade ago, and he finished a strong sixth in his first run with Andretti Autosport in the 2012 race. Three years later, missed the race entirely when a piece of suspension failed, sending him into the wall at over 200 mph and impaling him on a piece of metal — the quick work of safety crews kept him from bleeding to death.

Hinchcliffe returned the following year to triumphantly win the pole, and his career again seemed to be taking off. He wound up seventh, parlayed his sudden notoriety and unparalleled charisma into an appearance on “Dancing with the Stars,” and he won races each of the next two years to firmly establish himself as one of the series' top drivers.

But last year was a struggle for Hinchcliffe, who finished in the top five only once. He failed to crack the top 10 in the final points standings, lost his seat for this season and was left wondering what to do with the rest of his life.

The broadcast booth called. So did team owner Michael Andretti, who made him an offer to run at Texas and Indianapolis before the coronavirus pandemic caused the entire IndyCar season to be shuffled around.

“It's been weird. We showed up at St. Pete fully expecting not to race, and I was accepting to be part of the broadcast team,” Hinchcliffe said. “Then I was in the first race at Texas. I was in the second race at the Grand Prix (in Indianapolis). And it wasn't until Road America that the role switched, and I think I was less mentally and emotionally prepared for that weekend than going into St. Pete, because I felt like I started the season and I should have been out there.”

Hinchcliffe doesn't want to discount he opportunity afforded him by NBC. There is a good chance broadcasting is a career that can carry him long after his driving days are done. And besides, he will be right back in the booth a week after the Indy 500, when the series heads to St. Louis for a doubleheader weekend.

It's just that Hinchcliffe still feels as though he has plenty of laps left in the tank.

“I got really comfortable with everyone at NBC. They did a great job of taking care of a newbie,” he said, “and I'm going to have to put on the other shoe next weekend. But hey, it's not the weirdest thing that happened in 2020, so I can't complain.”

It wouldn't necessarily be weird to see Hinchcliffe in Victory Lane on Sunday, either. The entire six-car stable from Andretti Autosport has been fast all month, headlined by Marco Andretti winning the pole for his famous family.

Hinchcliffe will start on the outside one row back after qualifying sixth.

“James has been very successful here in the past, obviously pole in 2016,” said another teammate, Alexander Rossi, who will start right behind Hinchcliffe in Row 3. “He brings a lot of energy and excitement to the engineering room.”

He also knows what that would mean for his career — and landing another full-time ride — beginning as soon as next year.

“The conversations have been happening in conjunction with the season, going on behind the scenes. But we don't want to take away any focus of what we're trying to do here at the speedway, so it hasn't been totally full-on,” Hinchcliffe said. “Once we get through the 500, I think regardless of the result, we'll get a little deeper into those conversations."

After a brief pause, and with his trademark wit, he added: “Getting a ‘W’ on the board wouldn't hurt things.”