'Historic' moment in Florida as first COVID vaccines given 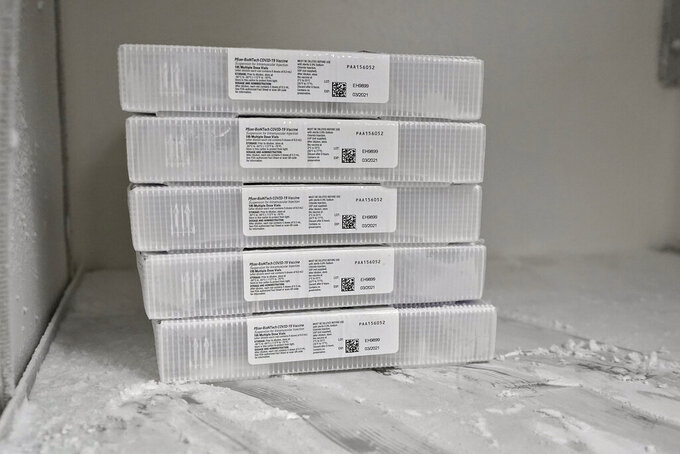 The Pfizer-BioNTech COVID-19 vaccine is seen in a freezer after being delivered Monday, Dec. 14, 2020, at the Tampa General Hospital in Tampa, Fla. (AP Photo/Chris O'Meara)

TAMPA, Fla. (AP) — A 31-year-old nurse at Tampa General Hospital rolled up her left shirt sleeve Monday and became one of the first people in Florida to receive the COVID-19 vaccine.

The vaccination was held during a news conference at the hospital, with Gov. Ron DeSantis looking on.

“Today was really a historic day,” he said.

Earlier Monday, DeSantis and others watched as a FedEx truck pulled up to the hospital with the Pfizer vaccine, which was just approved by the FDA for emergency use last week. The governor signed for the shipment and watched as the vaccines were placed in a deep freeze storage unit, at a temperature of minus 79 degrees. The hospital received 3,900 vials Monday. Each vial has five doses.

Because the Pfizer shot requires two rounds, the people getting the vaccines now will get a second shot in about three weeks.

By Tuesday, Florida will have 100,000 doses of the vaccine for five hospitals — Jackson Memorial in Miami, Broward Memorial, UF Health Jacksonville, and Advent Health in Orlando. CVS and Walgreens pharmacies in the state will also receive 60,000 doses to distribute at long-term care facilities, and the state will get 20,000 to administer at care facilities as well.

DeSantis expects to receive some 365,000 doses of the Moderna vaccine next week, after the FDA's emergency approval of that inoculation. Over the next two months, vaccine priority will be given to health care workers, employees at long-term care facilities, and residents of those facilities. In February and beyond, DeSantis added, the vaccine will become available for high risk people and the general public.

It's been 10 months since DeSantis held the first coronavirus news conference — which was also in Tampa. Back then on March 2, Florida had two confirmed cases.

The Florida Department of Health on Sunday reported a cumulative count of 1.12 million cases in the state, a daily jump of almost 9,000 new cases, and 20,133 related deaths, a daily increase of more than 80 deaths.

Among all states, Florida had the 41st most new cases per 100,000 residents and the 33rd highest rate of positive cases, according to the Dec. 6 report.

And it comes too late for the Floridians who had already been infected by the disease — although those who have recovered may now be immune from reinfection.

On Monday, the new president of the Florida’s state Senate, Wilton Simpson, said he was infected with COVID-19. As a result, he bowed out from taking part in his state’s electoral college vote later in the day. The governor’s office said two other electors won’t be taking part and that Lt. Gov. Jeanette Nunez would be among the alternates taking their places when Florida officially awards Florida’s 29 electoral college votes to President Donald Trump.

The governor’s spokesman, Fred Piccolo, could not immediately say why the two other electors could not take part in the vote.

A spokesperson for Wilton said he was concerned about allergy-like symptoms and a minor head cold, prompting him to get tested ahead of the electoral vote. He is self-quarantining at his farm in Trilby. The spokesperson, Katie Betta, said Simpson, 54, is not currently under medical care.

Simpson had been scheduled to meet with the news media Tuesday, as part of a traditional year-end briefing but the event has been canceled.

This story has been corrected to show the 31-year-old nurse in Tampa, Florida, was one of the first to be vaccinated, but not the first.