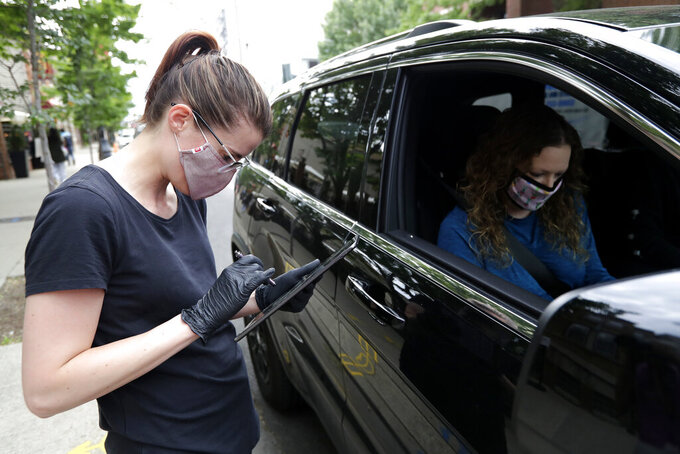 Michaela Kelly, left, a staffer from Alinea restaurant, checks carryout orders with a customer in Chicago, Saturday, June 20, 2020. Due to the coronavirus, Alinea shifted to carryout on March 17. Since then, it has served 82,000 meals, said Nick Kokonas, the restaurant's co-owner. Kokonas said carryout was so successful that Alinea hired all its employees back by the end of April at 80% of their former pay and benefits. (AP Photo/Nam Y. Huh) 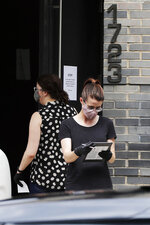 San Francisco chef Dominique Crenn was huddled with staff one day in mid-March when she learned that coronavirus restrictions would close the dining room at her celebrated restaurant, Atelier Crenn. Immediately, everyone started brainstorming.

“We said, ‘OK, who are we? We are people at the service of people, always here to feed the community,’” Crenn said.

Since then, Crenn and a skeleton crew — 20 of the 70 people she usually employs — have made hundreds of meals for medical workers and firefighters. They’ve sent meals to a nearby domestic violence shelter. They’ve started a takeout business, selling multi-course tasting menus — a seven-course luxury kit is $145 — and even a wine tasting kit.

Crenn is in good company. Chefs at many of the world’s best restaurants are making quick pivots to weather the coronavirus. Some say carryout has been so popular that they’ll continue when dining rooms reopen. Others stayed closed but made meals for their furloughed staff.

Alinea in Chicago used to welcome guests with a $365, 18-course tasting menu; it’s now cooking up a six-course to-go feast for $49.95. Copenhagen’s Noma, which usually requires reservations months ahead, opened an outdoor burger and wine bar. Les Amis in Singapore is selling grocery items like artisanal butter and caviar.

Restaurants were hit hard by the new coronavirus. In the U.S. alone, the industry lost 6 million jobs in March and April. But fine dining was hit hardest of all, says David Portalatin, an industry adviser with The NPD Group. At the low point, in April, U.S. fine dining transactions were down 82% from a year ago, he said.

Fourteen U.S. restaurants — including Atelier Crenn and Alinea — have earned the highest rating of three stars from the Michelin Guide. Of those, just one — The Inn at Little Washington in rural Virginia — has reopened its dining room at half capacity. The restaurant put mannequins at its empty tables to make the space look more inviting.

Some three-star restaurants, like The French Laundry in Yountville, California, and Restaurant Gordon Ramsey in London, have temporarily closed, saying that was the best way to protect guests and staff. Others aren’t offering carryout but are still cooking. Eleven Madison Park in New York is making 3,000 meals per day for frontline workers.

In Paris, renowned chef Alain Ducasse started Ducasse Chez Moi, offering delivery of meals like salmon ceviche for $14 and foie gras baked in a crust for $28. Delivery has been so popular it will continue when Ducasse’s restaurants reopen.

Alinea shifted to carryout on March 17. Since then, it has served 82,000 meals, said Nick Kokonas, the restaurant’s co-owner. It started with $35 entrees like beef wellington, which sold out every night, and moved on to tasting menus.

Kokonas said carryout was so successful that Alinea hired all its employees back by the end of April at 80% of their former pay and benefits. He thinks to-go meals will remain even after the restaurant reopens its dining room later this summer.

Toshi Szpyra, a behavioral analyst in Chicago, was looking forward to celebrating her wedding anniversary at Alinea earlier this month. Instead, she and her husband ordered a six-course spring tasting menu. Each dish came prepared with instructions for how to reheat and plate the meal, she said. The highlight? Scallops with ham and peas on fennel with a white wine vermouth cream sauce.

“This is a great way for them to bring the experience to people who may not have had the chance to get there yet,” she said. Szpyra plans to order takeout from Alinea again.

Some fine dining restaurants are using the closure to redesign their interiors or retool their menus, said David Mitroff, a restaurant consultant and founder of Piedmont Avenue Consulting. Restaurants of this caliber need to keep things fresh and interesting, he said.

Others are rethinking the experience entirely. Quince, a three-star restaurant in San Francisco, will likely be closed until fall. But starting in July, co-owner Lindsay Tusk is planning to offer lunches and dinners at the Marin County farm that grows the restaurant’s produce.

“It serves a higher purpose right now. Fine dining is not what we need. Connecting over nature and food in a beautiful setting and providing a genuine experience — that’s what we need,” she said.

Tusk usually employs 170 people at three restaurants: Quince, the less formal sibling Cotogna and wine bar Verjus. Most are furloughed, but she’s been able to hire back around 25 people to help at the farm. More will come back soon.

“It’s tough right now, but we’re hoping we get to a break-even point in the next few months,” she said.

High-end restaurants have some things going for them. Landlords like the prestige they convey, so they’re more likely to give them a break on the rent, Mitroff said.

Many top chefs also have other money-making outlets, like television shows and cookbooks. Manresa, a three-star restaurant in Los Gatos, California, made its full wine list available alongside takeout food and it’s made more than $50,000 just from selling wine, much of it to collectors looking for rare bottles. Crenn just published a memoir, and she used a $50,000 donation from Lexus to make meals for medical workers.

Even when restrictions allow restaurants to reopen, they’ll have to decide whether it makes sense financially. High-end restaurants spend less on food than regular ones because their portions are smaller, Mitroff said. But they spend more on labor, because they have more specialized workers like pastry chefs and sommeliers. Labor approached 50% of their total costs, he estimates.

High-end restaurants can make a profit because they fill their tables every night. But if the restaurant is only at partial capacity, the math may not work. That’s why The Inn at Little Washington is now offering two seatings per night instead of one.

Crenn expects to reopen Atlelier Crenn’s dining room on July 14. She only seats 28 people, and the tables are far apart. But the coronavirus has also made her reflect and want to try new things, like meal deliveries for the elderly.

“It’s more work than I ever thought, but one of the most incredible experiences I’ve ever had in my life,” she said.