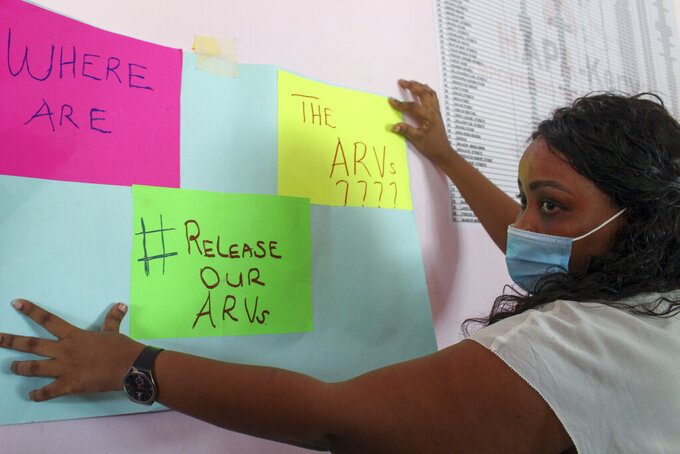 A protester holds a placard during a demonstration over shortages of anti-retroviral (ARV) medicines, organized by people living with HIV or AIDS, sex-workers, members of the LGBT community, and their supporters, in the port city of Mombasa, Kenya Thursday, April 22, 2021. Kenyans living with HIV say their lives are in danger due to a shortage of anti-retroviral drugs donated by the United States amid a dispute between the U.S. aid agency and the Kenyan government. (AP Photo)

NAIROBI, Kenya (AP) — Kenyans living with HIV say their lives are in danger due to a shortage of anti-retroviral drugs donated by the United States amid a dispute between the U.S. aid agency and the Kenyan government.

The delayed release of the drugs shipped to Kenya late last year is due to the government slapping a $847,902 tax on the donation, and the U.S. aid agency having “trust” issues with the graft-tainted Kenya Medical Supplies Authority, activists and officials said.

Activists on Friday dismissed as “public relations” the government's statement on Thursday that it had resolved the issue and distributed the drugs to 31 of Kenya's 47, counties. The government said all counties within five days will have the drugs needed for 1.4 million people.

“We are assuring the nation that no patient is going to miss drugs. We have adequate stocks,” Kenya Medical Supplies Authority customer service manager Geoffrey Mwagwi said as he flagged off a consignment. He said those drugs would cover two months.

The U.S. is by far the largest donor for Kenya's HIV response.

Kenya’s health minister, Mutahi Kagwe, told the Senate’s health committee earlier this week that USAID had released the drug consignment that had been stuck in port. Patients are expected to receive them during the week.

He said USAID had proposed using a company called Chemonics International to procure and supply the drugs to Kenyans due to “trust issues” with the national medical supplies body.

Bernard Baridi, chief executive officer of Blast, a network of young people living with the disease, said the drugs would last for just a month.

He said the delay in distributing the drugs, in addition to supply constraints caused by the coronavirus pandemic, meant that many people living with HIV were getting a week's supply instead of three months.

Many of those who depend on the drugs travel long distances to obtain them and may find it difficult to find transport every week, and if they fail to take them they will develop resistance, Baridi said.

"Adherence to medication is going to be low because of access. ... If we don’t get the medication, we are going to lose people,” he said.

According to Baridi, children living with HIV are suffering the most due to the shortage of a drug known Kaletra, which comes in a syrup form that can be taken more easily. Parents are forced to look for the drug in tablet form, crush it and mix it with water, and it's still bitter for children to ingest.

Baridi urged Kenya's government and USAID to find a solution on who should distribute the drugs quickly, for the sake of the children.

On Thursday, about 200 people living with HIV in Kisumu, Kenya's third largest city, held a peaceful protest wearing T-shirts reading “My ARV’s My Life” and carrying posters that read “A sick nation is a dead nation" and “A killer government."

Some 136,000 people live with HIV in Kisumu, or about 13% of the city's population, said local rights activist Boniface Ogutu Akach.

“We cannot keep quiet and watch this population languish just because they can’t get a medicine that is lying somewhere, and that is happening because the government wants to tax a donation,” he said.

Erick Okioma, who has HIV, said the government’s attention has been diverted by the COVID-19 pandemic, which has affected even community perception.

“People fear even getting COVID than HIV,” Okioma said, asserting that local HIV testing and treatment centers were empty.