Hockey champions laying off 30 workers because of virus 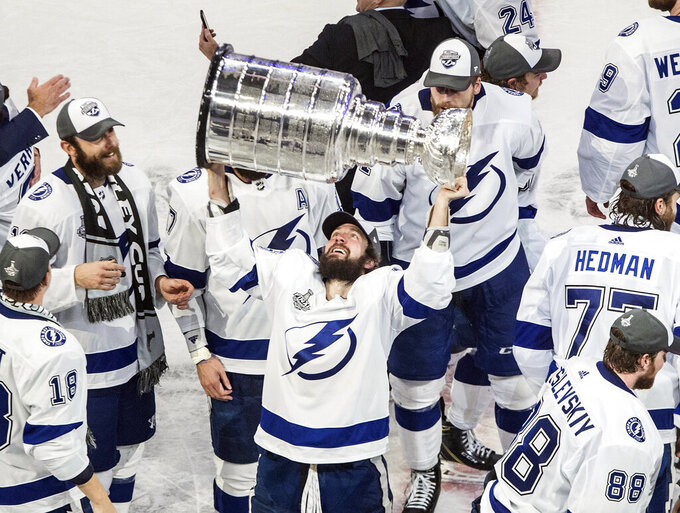 FILE - In this Sept. 28, 2020, file photo, Tampa Bay Lightning's Nikita Kucherov (86) hoists the Stanley Cup after defeating the Dallas Stars in the NHL Stanley Cup hockey finals, in Edmonton, Alberta. This has been a year for Tampa Bay sports like no other, though the area's three successful professional teams haven't had a chance to truly capitalize on the boom and connect with re-energized fan bases. It has been — and continues to be —- a missed opportunity because of the coronavirus pandemic. (Jason Franson/The Canadian Press via AP, File)

Just months after winning the Stanley Cup, officials with the Tampa Bay Lightning said Monday that they are eliminating 30 positions in a sign that even winning a championship does not spare a team from the effects of the coronavirus.

The positions were across the company and effective immediately, team officials said. The layoffs represent less than 10% of the team's workforce.

“Rest assured, these decisions were not made lightly,” Lightning and Vinik Sports Group CEO Steve Griggs told the Tampa Bay Times. “But with the sports and entertainment industry being impacted like at no other time in modern history, this was a necessary step as we position ourselves for maximum recovery."

Because the National Hockey League's postseason was played in bubbles in Canada, the team did not earn any revenue from the playoffs. The Lightning lost money last season and is expected to do so again during the upcoming season, team officials said.

Every employee who was working full-time in late September when the Lightning won the Stanley Cup by defeating the Dallas Stars, will receive a championship ring, the newspaper reported.

On Monday, the Florida Department of Health tallied more than 4,500 new confirmed COVID-19 cases in the state, bringing the total to more than 889,000 cases. Since the pandemic began, the virus has caused 17,559 deaths in Florida.