Hogan announces actions for large budget hit due to virus 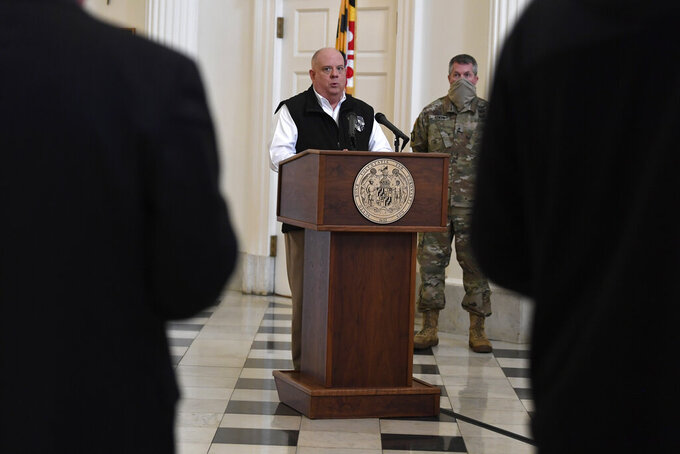 ANNAPOLIS, Md. (AP) — Maryland Gov. Larry Hogan announced steps on Friday to address a huge potential state revenue loss of up to $2.8 billion this fiscal year due to the coronavirus and to strongly urge voters to cast ballots by mail in the state's June 2 primary.

Hogan said the projected revenue loss would represent a 50% drop in projected revenues over the next 90 days and up to a 15% reduction in revenues for the fiscal year that ends July 1. As a result, Hogan said the state is immediately instituting a budget freeze across state government agencies, except for COVID-19-related expenses and payroll.

The governor said his budget office will be making recommendations for spending reductions, which will be required by all state agencies.

“In addition, the state will be tapping into and spending much of – perhaps even all of – the state’s rainy day fund balance,” Hogan said. “Responding to this crisis will likely create a multi-year budget issue, which will require further substantial budget reduction actions.”

The state's rainy day fund is an estimated $1.2 billion.

The Republican governor also said it was “very unlikely” he would sign legislation approved by the Maryland General Assembly that requires increased spending. The legislature, which is controlled by Democrats, has veto-proof majorities, and the governor can let measures he doesn't like go into law without his signature, without vetoing legislation.

The governor said he will implement recommendations made by the Maryland State Board of Elections for the June 2 primary. The board recommended voters mail in their ballots. However, it also recommended having one, and as many as four, locations for in-person voting in each of the state's jurisdictions.

“We are joining them in strongly urging every Marylander who can vote by mail to cast their ballot by mail," Hogan said at a news conference in the Maryland State House, where he and other officials wore masks, except for when they spoke at a podium. “We understand that there are a small number of exceptions, including individuals without a fixed address and voters with special needs.”

Meanwhile, Hogan said the state’s transportation department in coordination with the Federal Emergency Management Agency is setting up a new decontamination site for personal protective equipment at Baltimore/Washington International Thurgood Marshall Airport. It will be able to clean and sterilize up to 80,000 N95 masks per day, the governor said.

Hogan also announced a $2.5 million investment in a joint partnership with the University of Maryland School of Medicine to provide technology to launch a large-scale testing initiative to enable their lab to run up to 20,000 tests a day.

Comptroller Peter Franchot held an availability with journalists online to discuss the severe drop in projected revenues. He urged people to take the long view, not “some delusional predictions out there that we can get back to normal and switch the economy on like a light bulb.”

“Not going to happen, and people need to understand that and need to be told the truth — that this is something that’s going to take years to recover from,” Franchot, a Democrat, said. "And, hopefully, we’re not going to disagree with the public health experts, who are trying for goodness sakes to protect our lives, by saying that the last thing you want to do is jump back into a big bang start of the economy too soon.”

Not far from the Maryland State House, the U.S. Naval Academy announced it was canceling all of this year's commissioning week public events due to the virus.