Hogan calls for some in-person school learning by March 1 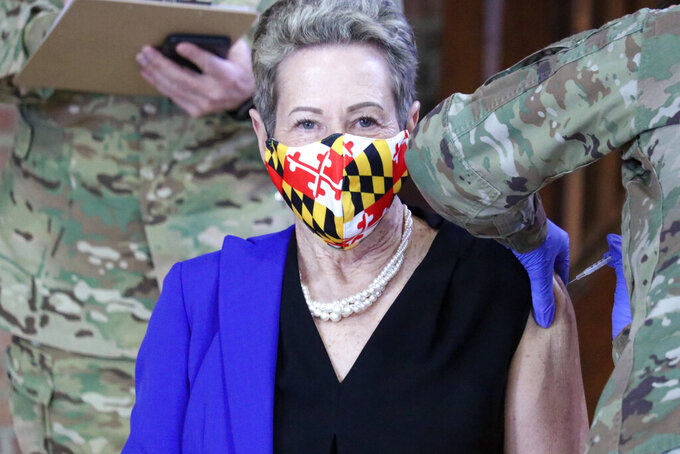 Maryland State Superintendent of Schools Karen Salmon receives a COVID-19 vaccine after a news conference on Thursday, Jan. 21, 2021 in Annapolis, Md. Gov. Larry Hogan urged all of Maryland's county school systems to make every effort to return to some form of in-person instruction no later than March 1. (AP Photo/Brian Witte)

ANNAPOLIS, Md. (AP) — Gov. Larry Hogan called on all Maryland school systems on Thursday to make every effort to have some form of in-person classroom learning by March 1, or he'll do whatever he can to make it happen.

Ultimately, local officials in Maryland's 24 local jurisdictions have the authority to make the decision, but the Republican governor emphasized at a news conference he would “do everything I possibly can do within the law to push to get all of Maryland’s children back into the classrooms.”

“Today, we are urgently calling on all county school systems to immediately make every effort to return to hybrid in-person instruction — no later than March 1, if not sooner," Hogan said at a news conference in a gymnasium at St. John's College in Annapolis.

A growing consensus has emerged that there is no public health reason for county school boards to keep students out of schools, the governor said, and he pointed out that President Joe Biden has made returning children to schools a top priority.

“There is no public health reason for school boards to be keeping students out of schools. None," Hogan said. “This isn’t really controversial. The science is clear. Nearly everyone wants to get our kids back into schools.”

Data from contact tracing and epidemiologists have indicated that school openings do not increase community spread or contribute to increased hospitalization rates, Hogan said. The governor also noted that Maryland's health metrics have shown some signs that COVID-19 is plateauing in the state.

While school systems have made strides with using remote learning to teach students during the pandemic, Hogan said far too many students are unable to thrive remotely. He said online learning has taken a toll on students, families and educators.

“It’s now estimated that by the end of the school year, the cumulative learning loss for students could equate to at least five to as many as nine months on average, with the losses disproportionately impacting students of color and low income and disadvantaged students even more," Hogan said. “That is completely unacceptable.”

The governor emphasized that the Maryland State Board of Education has approved safe and effective plans for all 24 school systems, and state health officials are providing additional science based protocols for safely reopening. Hogan said the state is providing more than 2 million masks and 200,000 face shields, along with sanitizer, gowns and gloves.

He also said Maryland has prioritized vaccinating teachers and staff.

“Each school system has plans for vaccinating their staff, and that processing is now already under way across the state," Hogan said.