Holocaust survivor who testified against Eichmann dies at 91 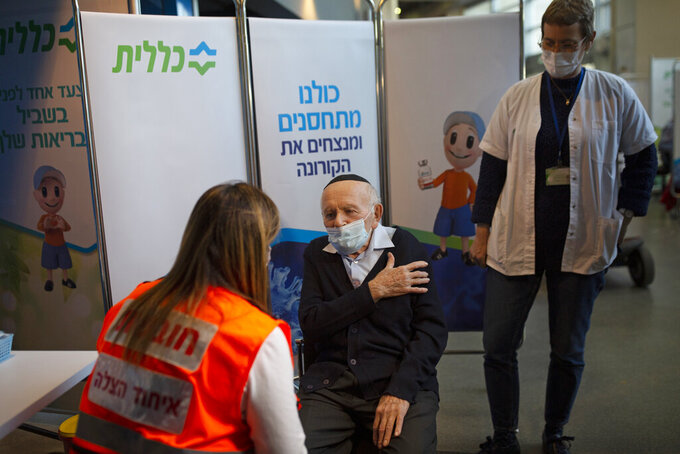 FILE - In this Jan. 21, 2021 file photo, Holocaust survivor Joseph Zalman Kleinman gestures to the arm he prefers to receive the second dose of the Pfizer vaccine for COVID-19, in Jerusalem. Kleinman who lived through through the Auschwitz death camp and testified against Adolf Eichmann in the Nazi commander's trial in Jerusalem, died Tuesday in Israel. He was 91. (AP Photo/Maya Alleruzzo, File)

JERUSALEM (AP) — Joseph Zalman Kleinman, a Holocaust survivor who survived the Auschwitz death camp and testified against Adolf Eichmann in the Nazi commander's trial in Jerusalem, died Tuesday, Israeli media reported. He was 91.

The cause of death was not immediately released. Kleinman was one of fewer than 180,000 remaining Holocaust survivors in Israel.

Kleinman was born in Slovakia in January 1930 and was deported by Nazi Germany to the camp at Auschwitz-Birkenau at the age of 14. His father, mother and sister were killed at Auschwitz, one of the most notorious Nazi death camps in occupied Poland.

“In the summer of 1944, 3,000 young men aged 14 to 16 were gathered at Auschwitz ... in tough conditions, acute starvation. We were there the whole summer and then at the Jewish New Year and Yom Kippur and Simchat Torah (Jewish high holidays), nearly everyone was exterminated,” he said.

Eichmann, one of Nazi Germany’s main organizers of the Holocaust, was captured by Israeli Mossad agents outside Buenos Aires, Argentina, in 1960. He was put on trial in Jerusalem in 1961 and found guilty of crimes against humanity, crimes against the Jewish people and war crimes. He was executed the following year.

In testimony during the trial, Kleinman told the court about the conditions in Auschwitz, and how he avoided being executed as ordered by Josef Mengele, the Nazi officer and physician known as the “Angel of Death."

After his liberation by American forces from a concentration camp near Dachau, Germany, Kleinman rode “an enormous train, with two large locomotives pulling it, that started moving southwards” through Europe, he later told archivists at Yad Vashem, the World Holocaust Remembrance Center.

“At every train station, Italians would alight from the train, returning to homes they hadn’t seen in years. All the townspeople waited for this train with refreshments, here and there even a welcoming orchestra. Every station, people would get off, but for us Jews — no one was waiting for us."

Kleinman immigrated to Israel after the war.

Earlier this year, he spoke to The Associated Press after receiving his coronavirus vaccine shots. He recounted that he came into repeated contact with disease, both during his time at Auschwitz and after, As the war was coming to an end, Jews were placed in camps for the internally displaced.

Kleinman encouraged others to go get the coronavirus vaccine. “Don’t neglect this thing. It must be done, and the fact is it saves people,” he said.

Kleinman was laid to rest Tuesday in Jerusalem.