Homers, happy: Twins welcome fans back with 10-2 win vs. M's 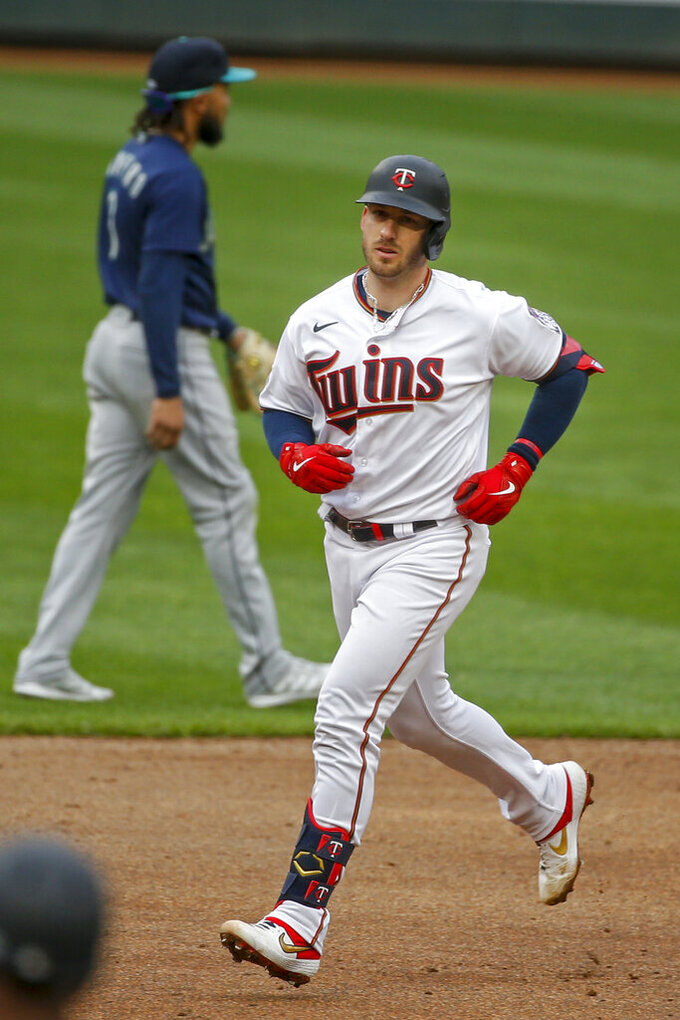 Minnesota Twins' Mitch Garver runs the bases after hitting a three run home run against the Seattle Mariners in the third inning of a baseball game Thursday, April 8, 2021, in Minneapolis. (AP Photo/Bruce Kluckhohn) 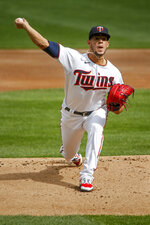 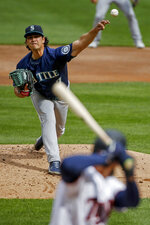 MINNEAPOLIS (AP) — The Minnesota Twins welcomed their fans back to the ballpark by hitting like they wanted to give them all souvenirs.

Though Target Field was at coronavirus-limited capacity, the Twins played like the place was full.

Mitch Garver, Byron Buxton and Luis Arraez hit home runs to back another strong start by José Berríos, and the Twins beat the Seattle Mariners 10-2 on Thursday.

Berríos (2-0), who no-hit Milwaukee over six innings in his first turn, threw two more hitless innings before surrendering his first run of the season in the third. Pulled with two outs in the sixth, Berríos tipped his cap to the sellout crowd of 9,675 as he strutted off the mound.

“We’ve been waiting for this moment a really long time. Everybody knows here the fans are great people. They like baseball and are always cheering for us no matter what happens,” Berríos said.

Said Arraez: “They’re everything for us."

Garver had the three-run shot that got the Twins going in their home opener, a straightaway screamer to center field that landed in the living wall of junipers for a 3-1 lead in the third inning against Mariners starter Marco Gonzales (0-1).

The Twins, whose only two losses have been 10th-inning walk-offs, wound up with a season-high 16 hits. Buxton went 3 for 5, Arraez drove in three runs, and Andrelton Simmons had two of the team's six doubles.

Gonzales didn't finish the fifth. He allowed nine hits and was charged with seven runs to balloon his ERA to 10.45.

Ty France had two hits and José Marmolejos homered off Berríos, but the Mariners couldn't keep up with the two-time AL Central champions.

With seating socially distanced and limited by the state to about 25% capacity, the Twins played their warmest home opener — 67 degrees — for a season that started on time since Target Field opened in 2010. Last year, their first home game was on July 28, a 60-game schedule played with the gates closed due to the pandemic.

The afternoon just about had it all for the folks who snagged tickets, including a 16-minute rain delay. Former Twins manager Ron Gardenhire tossed out the ceremonial first pitch to his son Toby Gardenhire, now the manager of the Triple-A affiliate St. Paul Saints. An “MVP” chant was fired up for Buxton, who batted in the cleanup spot and has three doubles and four homers in six games.

Berríos picked off two runners, the first Twins pitcher to do so since Kyle Gibson in 2016. Designated hitter Nelson Cruz beat out a slow roller for an infield single, taking first base in the sixth inning with a big grin.

“It felt like there were a lot of people in the stands, I’ll be honest with you, and for us to go out there and play a nice ballgame for them makes it all the better,” manager Rocco Baldelli said.

Gonzales, who started on opening day for the Mariners and gave up five runs in six innings to San Francisco, was awfully hittable again.

“He’s as good of a competitor as we have in here, and he will grind it out and certainly get better next time,” manager Scott Servais said. “We’re all trying to help him figure it out right now.”

The Twins were set to have COVID-19 shots available for players and key staff after the game, with Major League Baseball seeking an 85% vaccination rate before relaxing virus protocols.

Mariners: LHP James Paxton was seeking a second opinion on his MRI test results after a strained left forearm limited him to 24 pitches in his first start on Tuesday. MLB Network reported that Tommy John surgery was recommended for Paxton, but Servais said after the game he hadn't been informed of that. ... 1B Evan White, removed from the game on Wednesday with tightness in his left quadriceps, was out of the lineup but could avoid the injured list, Servais said.

Twins: 3B Josh Donaldson (mild right hamstring strain), who is eligible to come off the injured list on Monday, has been a batting practice “machine” and a “treadmill monster,” Baldelli said, without committing to a return date. “Trying to edge your way back while playing Major League Baseball while not at 100 percent with a muscle injury is a very, very dangerous thing.”