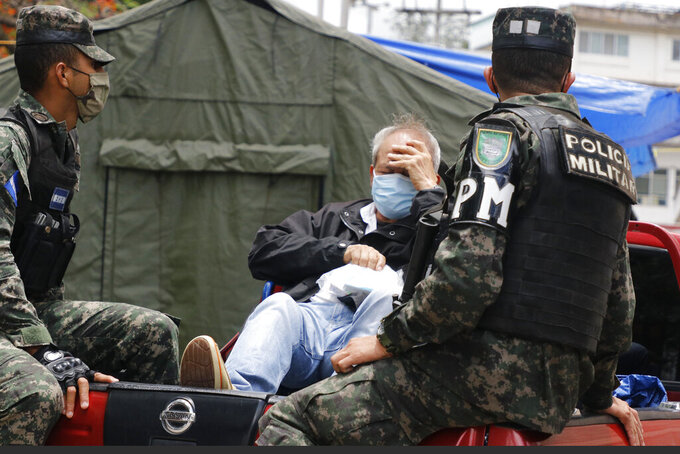 Military police bring in a person who has COVID-19 symptoms to the Hospital Escuela, in Tegucigalpa, Honduras, Thursday, June 18, 2020. The hospitalization Wednesday of Honduras' president with COVID-19 and pneumonia has drawn attention to another country struggling under the pandemic's strain as cases rise exponentially in the capital. (AP Photo/Elmer Martinez)

TEGUCIGALPA, Honduras (AP) — Honduran President Juan Orlando Hernández is in stable condition and being treated for pneumonia after testing positive for COVID-19, one of his doctors said Thursday.

Dr. César Aarón Carrasco at the Military Hospital said Hernández’s condition had improved since he was admitted Wednesday with difficulty breathing, fever and fatigue.

“In the two days that he’s been hospitalized an improvement in his situation has been observed,” Carrasco said. “He’s in a good general state, recovering.”

Carrasco said the president no longer labored in his breathing, but still suffered fatigue when walking. He said it was unclear how long Hernández would remain hospitalized.

The president announced late Tuesday that he and his wife had tested positive for the virus. Just hours later he was hospitalized after doctors determined he had pneumonia.

On Wednesday, Francis Contreras, spokesman for the National System of Risk Management, said at a news conference that after reviewing Hernández’s lab work and X-rays, doctors determined the president had pneumonia and recommended he be hospitalized. He said Hernández was in good condition, but he was receiving medicine intraveneously that had to be administered in a hospital.

The president had said that over the weekend he began feeling some discomfort and on Tuesday received the test results. He said two other people who work with them are also infected.

Hernández is a close ally of the Trump administration, primarily in efforts to slow illegal immigration. However, U.S. federal prosecutors in New York have prosecuted the president’s brother and made it increasingly clear that a case is building against Hernández himself.

No charges have been filed against the president, but U.S. prosecutors have alleged he accepted money from drug traffickers to advance his political career in exchange for letting them move drugs through the country. Hernández denies those allegations.

He was re-elected in a disputed November 2017 election, despite the country’s constitutional ban on re-election.