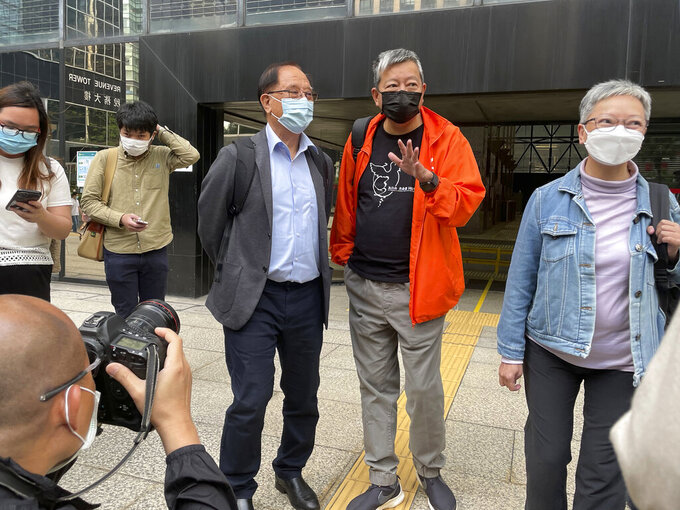 Pro-democracy activists Lee Cheuk-yan, second from right, and Yeng Sum, a former chairman of the Democratic Party, third from right, speak to media after being released on bail at a court in Hong Kong, Wednesday, April 7, 2021. Three veteran Hong Kong pro-democracy activists, including well-known publisher Jimmy Lai, have pleaded guilty to taking party in an unauthorized rally that resulted in violence between police and participants, media reported Wednesday. (AP Photo/Rafael Wober)

HONG KONG (AP) — Three veteran Hong Kong pro-democracy activists, including well-known publisher Jimmy Lai, pleaded guilty Wednesday to taking part in an unauthorized rally in 2019 that led to violence between police and participants. The charges carry prison terms of up to five years.

Lee Cheuk-yan, an ex-legislator, and Yeng Sum, former chairman of the Democratic Party, were released on bail. Lai was returned to jail as he is already being held on other charges related to his outspoken opposition to China’s crackdown on civil liberties in the former British colony.

Walking out of the courthouse in Wanchai district, Lee said that despite pleading guilty, he and the others saw no fault in their actions.

“Today we plead guilty to the charges, but we have done no wrong. This is an act of civil disobedience. We want to reclaim our right to demonstration and we affirm the right of people, that we have the right to come out to march,” Lee said.

“And we believe that history will absolve us, because we believe that any political progress, and the progress and rights of the people, have to be reclaimed by the people by exercising their rights to come out to march,” Lee said.

The court was shown videos of the three at the Aug. 31, 2019, event that led to clashes in various parts of the cramped city of more than 7 million that was roiled by anti-government protests at the time.

The pleas appear to be another blow against the opposition movement after seven of Hong Kong’s leading pro-democracy advocates, including Lai and an 82-year-old veteran of the movement, were convicted last week of organizing and participating in a march during the 2019 protest movement.

Separately, one of a group of activists detained at sea as they sought to flee Hong Kong by speedboat was brought to court Wednesday amid extraordinary security. A fleet of motorcycles and police cars along with helmeted officers toting shotguns and machine guns accompanied Andy Li, who is charged with collusion with foreign forces under a new national security law, as well as unlicensed possession of ammunition and conspiracy to assist offenders.

Li was first charged with collusion last August under the national security law imposed last year. He had been one of 12 Hong Kongers detained by mainland Chinese authorities on a boat in late August 2020, sentenced to seven months in prison, and returned to Hong Kong on March 22.

Li’s story then took a twist reflective of China’s opaque legal system. His family was unable to contact him for days after his return to Hong Kong. Then, a lawyer unknown to Li’s family appeared to represent him.

That lawyer, Lawrence Law, was also at court Wednesday. Law works at Olympia Chambers, which last week issued a statement saying that “Mr. Law has no duty to inform the press about the details of his instructions, and/or to the family members of Mr. Li.” It said Lawrence Law was “instructed through a private firm of solicitors to appear,” but no other information was provided.

Li’s court appearance Wednesday was his first time in court after completing the mandatory 14-day coronavirus quarantine on return from mainland China. He is now back behind bars until his next hearing on May 18. The national security law requires judges to deny bail unless they are convinced the accused will not again commit the crime of which they have not yet been found guilty.

Eight of the activists had been jailed in the southern city of Shenzhen and returned to Hong Kong in batches, according to a police statement Monday. The group was detained at sea in August last year during an attempt to reach self-ruled Taiwan. Many were facing prosecution in Hong Kong because of their past involvement in the 2019 protests.

The governments in Hong Kong and Beijing have been pursuing opposition figures to exert greater control over the semi-autonomous Chinese territory.

Hong Kong had enjoyed a vibrant political culture and freedoms not seen elsewhere in China during the decades it was a British colony. Beijing had pledged to allow the city to retain those freedoms for 50 years when it was handed control of the territory in 1997, but recently ushered in a series of measures that many fear are a step toward making Hong Kong no different from cities on the mainland.

The 2019 protests were sparked by opposition to a bill that would have allowed suspects to be extradited to mainland China to face long periods of detention, possible torture and unfair trials. While the legislation was eventually withdrawn, the protesters’ demands expanded to include calls for full democracy.

Beijing ignored them and responded by clamping down even harder, including imposing the national security law and changes last month that will significantly reduce the number of directly elected seats in Hong Kong’s legislature. As a result, most of Hong Kong’s outspoken activists are now in jail or in self-exile.

This story has been corrected to show that the group of 12 attempted to flee Hong Kong in August 2020, not August 2019.