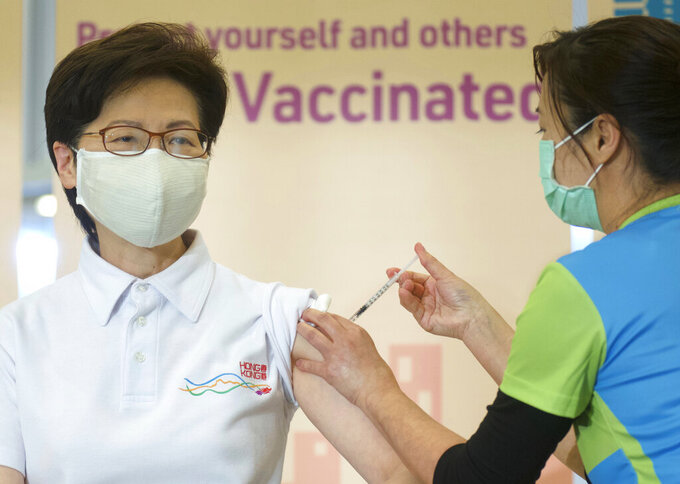 Lam and city’s health minister Sophia Chan were among the first people to receive their vaccines in Hong Kong, after about a million doses of the vaccine by Chinese biopharmaceutical company Sinovac Biotech arrived in the Chinese territory last week.

Hong Kong is to begin its inoculation program on Friday after several delays in vaccine shipments to the city. Those who will receive priority for the vaccinations include the elderly, medical workers, caretakers at elderly homes and employees such as airline cabin crew and cross-border drivers.

“We are very determined, very committed to rolling out a free and universal vaccination program for the people of Hong Kong so that we could get ourselves out of this epidemic as soon as possible,” Lam said to reporters after she was inoculated.

Efforts to fight the pandemic, including the vaccination program, require the full collaboration of the people of Hong Kong, she said.

A recent poll conducted by the University of Hong Kong found that respondents were distrustful of the Chinese vaccine, with only about 30% willing to accept it amid concerns about its low efficacy.

In contrast, 56% of respondents were willing to take the Pfizer-BioNTech vaccine.

Hong Kong’s government has also ordered the Pfizer-BioNTech and AstraZeneca vaccines. So far, only the Sinovac and Pfizer-BioNTech vaccines have been approved for use in the city.