Hopkins not surprised by trade, ready to help Cardinals 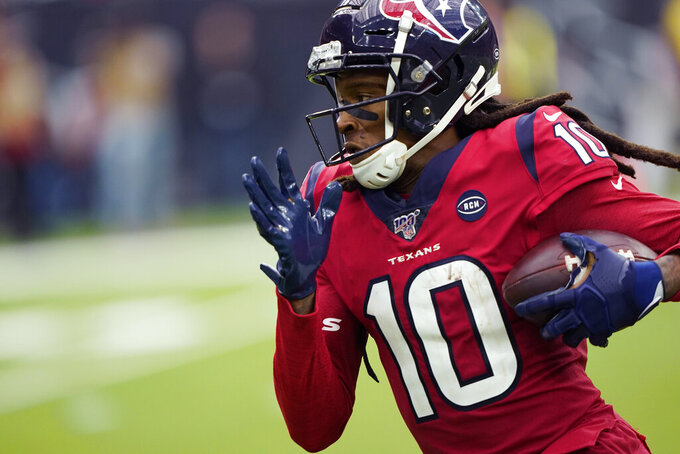 FILE - In this Dec. 8, 2019, file photo, Houston Texans wide receiver DeAndre Hopkins runs for a touchdown against the Denver Broncos after a catch during the second half of an NFL football game in Houston. Arizona Cardinals GM Steve Keim has been widely praised over the past few weeks after adding elite receiver Hopkins in a trade and signing three potential defensive starters. The moves have given Arizona a lot of flexibility for the upcoming draft, eliminating the gaping holes that needed immediate attention. (AP Photo/David J. Phillip, File)

Most of the NFL world was stunned when the Arizona Cardinals pulled off a trade last month to land elite receiver DeAndre Hopkins from the Houston Texans for running back David Johnson.

One of the few people unfazed by the deal? Hopkins.

“No, I wasn't surprised at all,” the three-time All-Pro said.

Hopkins said he heard rumors about a potential trade from people he trusted dating back to last season, so he was prepared for a deal. He also knew that Arizona was one of the potential landing spots, and now that it's happened, he's looking forward to sharing a field with young quarterback Kyler Murray and receivers Larry Fitzgerald and Christian Kirk.

The 6-foot-1, 212-pound Hopkins has been one of the league's most consistent and durable receivers over the past seven seasons. He's had at least 1,000 yards receiving in five of the past six years and has played in 110 out of 112 regular-season games in his career.

He has three years remaining on a five-year, $81 million contract he signed in 2017. Responding to a question about a potential new deal with Hopkins, Cardinals GM Steve Keim said earlier this week that he's talked with Hopkins' agent but he'll “keep the nature of those conversations to myself.”

Hopkins didn't get into specifics about his contract situation.

“DeAndre Hopkins just goes out and works out every day to prepare myself to get my team that opportunity to win a championship,” Hopkins said. “Everything behind close doors, that's between my agent and the organization.”

Hopkins said he's watched a lot of Murray's film over the past month and compared the second-year quarterback to the Texans' Deshaun Watson, who also has a strong arm and the ability to run. Hopkins won't have a normal offseason to learn the Cardinals' offense because of the coronavirus pandemic, but said he's already in communication with Murray about going over the offense.

“I don't think it's going to be something that will be a big problem,” Hopkins said. “We're professional athletes and I've been in the NFL for seven years, played under two different offenses, so I'm familiar with offensive changes. I think it'll be pretty smooth.”

The addition of Hopkins was the exclamation point on what's been a busy offseason for the Cardinals. The team re-signed running back Kenyan Drake and remade the defense by adding linebackers Devon Kennard and De'Vondre Campbell along with defensive lineman Jordan Phillips. They also have the No. 8 overall selection in next week's draft.