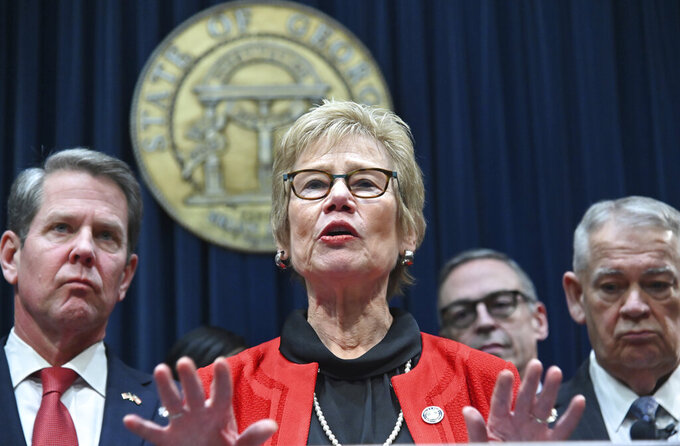 FILE - In this Thursday, March 12, 2020 file photo, Dr. Kathleen Toomey, commissioner of the Georgia Department of Public Health, speaks during a news conference at the Georgia State Capitol in Atlanta to provide an update on the state's efforts regarding COVID-19, after reporting the first death in Georgia related to coronavirus. With the increased public scrutiny, security details have been assigned to Dr. Anthony Fauci, the nation's top infectious disease expert, and top state health officials like Toomey and Ohio's Dr. Amy Acton following protests by armed demonstrators and threats against the two women. (Hyosub Shin/Atlanta Journal-Constitution via AP) 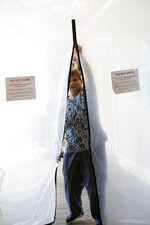 ATLANTA (AP) — The number of people hospitalized in Georgia because of COVID-19 rose to 1,000 Monday, erasing a month’s worth of progress and showing that an accompanying increase in confirmed infections is leading to serious illness.

Coronavirus infections have been rising throughout June and are now at the highest level since the pandemic began. Georgia has averaged 1,073 infections reported daily over the last seven days, according to figures kept by The Associated Press. Since Friday, the average has been higher than the previous peak of 857 set on April 13.

Almost 66,000 Georgians have now been infected since the start of the outbreak, the Georgia Department of Public Health reported, and 2,648 people have died statewide.

The surge in infections comes nearly two months after Georgia began lifting restrictions April 24 on hair salons, gyms, bowling alleys and other businesses that had been forced to close to slow the virus. Restaurants, retail stores and bars have since reopened as well.

“What we’re seeing is that people are going out and just basically not realizing the virus is still there,” Dr. Carlos del Rio, an infectious disease expert at Emory University, told reporters in a conference call Monday.

Hospitalizations had fallen steadily beginning in April and through May, bottoming out at 783 on June 7. The numbers have marched steadily upward since.

Deaths trended upward earlier this month, but haven't spiked as infections and hospitalizations have. Still, at the current pace, 8,600 Georgians could die from the virus by the end of the year.

Savannah Mayor Van Johnson said Monday he's so alarmed by the rapid increase in infections that he wants to require people to wear masks in public places. He asked the city's attorney to begin drawing up an emergency order to make face coverings mandatory.

Savannah and surrounding Chatham County had reported 205 infections and six deaths when Georgia began to reopen April 24. As of Monday, infections in the county had surpassed 800, while deaths had shot up to 33 — a number more than five times higher than just two months ago.

“I believe, colleagues, that we are facing an emergency,” Johnson told Savannah council members.

States including New York and California have mandated wearing masks in some settings where social distancing isn’t possible. In Georgia, Gov. Brian Kemp has required face coverings by restaurant waiters, barbers and others working face-to-face with customers. But he’s largely let businesses decide for themselves whether customers have to wear masks as well.

Kemp spokeswoman Candice Broce declined to comment on whether an attempt by Savannah to mandate masks would run afoul of limits Kemp's executive orders have placed on cities and counties to impose their own coronavirus restrictions.

Georgia's highest per-capita infection rate remains in Echols County at the Georgia-Florida line, where officials have cited large numbers of infections among farm workers. The second-highest rate is in Chattahoochee County, home to many soldiers at Fort Benning.

Dr. Jodie Guest, an Emory University epidemiologist, said some individual testing sites set up to screen farm workers in south Georgia have shown “staggering rates” of infection — with up to 70% testing positive. At sites established to test poultry workers around Gainesville in northeast Georgia, up to 25% were found to be infected.

Many of those workers live with multiple relatives or even multiple families in single-family homes, Guest said. Or they live in barracks-style housing while performing seasonal labor.

Del Rio said there’s no evidence so far of outbreaks related to protests against racial injustice that drew large crowds in Atlanta and other Georgia cities in the past month. He said that’s likely because those gatherings were held outdoors — and a large number of protesters appear to have worn face masks.

Previous versions of this story incorrectly spelled the first name of Jodie Guest.