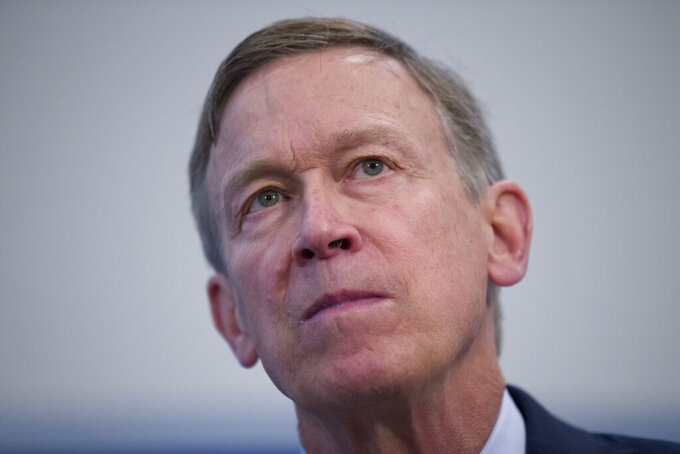 FILE - In this June 13 ,2019, file photo former Colorado Governor John Hickenlooper listens to a question during a media availability at the National Press Club in Washington. Hickenlooper was supposed to be Democrats' worry-free solution to the Colorado Senate race, but he's stumbled badly in the weeks leading up to the party's June 30 primary. (AP Photo/Alex Brandon, File)

DENVER (AP) — Former Gov. John Hickenlooper was supposed to be Democrats' worry-free solution to the Colorado Senate race, but he's stumbled badly in the weeks leading up to the party's June 30 primary.

Hickenlooper defied a subpoena from the Colorado Ethics Commission, only testifying after the nonpartisan panel found him in contempt. Then the commission found he'd violated state ethics laws by accepting free travel while governor.

Meanwhile, as protests raged over police violence against black people, Hickenlooper garbled his explanation of the key activist phrase “Black Lives Matter” and had to apologize for a 6-year-old quip in which he compared politicians to slaves “on an ancient slave ship” being whipped to row faster.

The 68-year-old brewpub magnate-turned-politician has never been a smooth campaigner. His nonpartisan leanings, unscripted style and corny jokes are part of what endeared him to Colorado voters, helped him win two races during strong Republican years and convinced national Democrats he was their best shot at picking up a critical Senate seat that could help them take the majority.

But if Hickenlooper emerges from the primary victorious but battered, his stumbles could give a lifeline to the man he'd face in November: Cory Gardner, widely considered the nation's most vulnerable Republican senator. Hickenlooper's troubles this year reflect how the state has moved to the left since his last election in 2014.

“It's an indication of how much Denver and the whole state has changed,” Floyd Ciruli, a nonpartisan analyst, said of Hickenlooper's woes. “We're no longer a swing state. We've become a more liberal state and the Democrats a more liberal party.”

Hickenlooper's rival, former Colorado House Speaker Andrew Romanoff, is another longtime Colorado Democrat who came of age politically when members of that party had to convince the state's pragmatic-minded voters they weren't radicals.

Romanoff lost his last two races — in 2010, he sold his house to finance an underdog primary challenge to Democratic Sen. Michael Bennet, and in 2014, he unsuccessfully challenged a Republican congressman in a swing district. Now Romanoff is campaigning on the Green New Deal and single-payer health care, hoping to beat Hickenlooper from the left in a state that Bernie Sanders won on Super Tuesday.

Romanoff's allies argue that Hickenlooper’s woes are about more than just ideology. “People are realizing it now. This guy they put on a pedestal, he's a hot mess,” said Democratic former state Rep. Joe Salazar, who often clashed with Hickenlooper in the statehouse.

Hickenlooper's statewide name recognition, high approval ratings and deep campaign bank account were expected to give him an insurmountable advantage over Romanoff. On Thursday, he's set to roll out an endorsement from Wellington Webb, a black former Denver mayor, and announce a whopping $3.7 million fundraising haul since April 1.

Republicans have openly rooted for Romanoff, seeing him as a weaker challenger in November against Gardner. On Tuesday, both Gardner and the National Republican Senatorial Committee released ads bashing Hickenlooper, an unusual move during a Democratic primary. The Democratic Senate Majority PAC spent $1 million to air an ad defending the former governor.

During a debate Tuesday night, Hickenlooper grounded his case in electability. “Inside the state of Colorado, I haven’t lost yet, and Andrew hasn’t won an election in 14 years,” Hickenlooper said.

Romanoff shot back, “They're not going to attack me for violating the state ethics law because I didn’t.” In an interview Wednesday, Romanoff said of Hickenlooper, “He's now endangering our chances to beat Cory Gardner.”

Hickenlooper's campaign said he wasn't available for an interview Wednesday.

The ethics issue had dogged Hickenlooper even before he entered the race. A self-made multimillionaire, he faced a complaint filed by Republicans just as he left office that he had improperly accepted rides on private jets and cars during his governorship. Hickenlooper and his supporters argued the complaint was a blatant attempt by the GOP to tarnish his image.

The ethics issue rarely came up during Hickenlooper's brief bid for the Democratic presidential nomination. Then Senate Democrats, alarmed at an unwieldy primary for the party's nomination to challenge Gardner, recruited Hickenlooper to run for the Senate instead.

The ethics investigation into Hickenlooper moved slowly, even as every other candidate besides Romanoff dropped out. Hickenlooper was prepared to testify during an in-person hearing in March that was canceled because of the coronavirus outbreak. When the commission proposed having Hickenlooper testify during a virtual hearing, he objected and even went to state court to quash the commission's subpoena, arguing it would violate his rights.

Ultimately, Hickenlooper testified via video, and the commission found he violated Colorado's ethics law by accepting a flight on a private plane to a ceremony naming the USS Colorado and by accepting a limousine ride at the exclusive Bilderberg meetings in Rome. The commission fined Hickenlooper $2,750 — the highest fine in its history and twice the estimated cost of the two trips.

Meanwhile, as protests erupted over the killing of George Floyd by Minneapolis police, Hickenlooper was asked during an online forum what "Black Lives Matter" means to him. He said it meant “every life matters” — a phrase many activists see as dismissive of their efforts to focus on discrimination against black people. Hickenlooper quickly apologized and said he “tripped” in his explanation.

On Monday, Hickenlooper had to apologize again — this time after a black Denver school board member tweeted a 6-year-old video of the then-governor making a joke about how politicians' schedules are so packed they are like rowers on “an ancient slave ship” being whipped to go faster.

“Hickenlooper hasn't been showing up for black people until it becomes time for an election,” said Tay Anderson, the school board member, a leader in the Floyd protests in Colorado who has endorsed Romanoff.

Hickenlooper's supporters say the goodwill he built up during two terms as Denver mayor and two more as governor will get him through.

“He is many things, but personally corrupt and racially insensitive are definitely not among his flaws,” said Alan Salazar, a former aide. “I am pretty sure that most Colorado voters know that.”