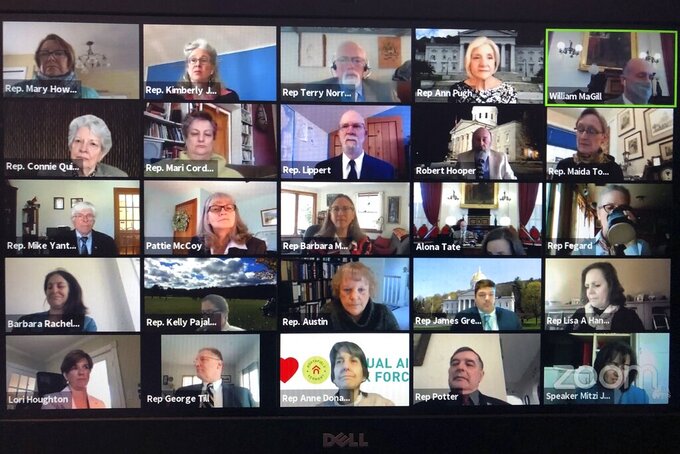 Members of the Vermont House of Representatives convene in a Zoom video conference for its first full parliamentary online session on Thursday, April 23, 2020, in Montpelier, Vt. The first order of business was to ratify a rule change passed in March to allow online meetings developed in response to the coronavirus outbreak. (Wilson Ring/Zoom via AP)

The Vermont House of Representatives held its first full, online floor session on Thursday, a legislative response to the COVID-19 epidemic's need to stay apart while finding a way to pass legislation.

From homes across the state, 153 members of the House and a handful of staff, some of whom were in the Montpelier Statehouse, met electronically. A few lawmakers called in and weren't visible online.

The session came after lawmakers held 14 committee practice sessions and many smaller online meetings since the House gave preliminary approval last month to a resolution authorizing the online sessions.

The first order of business was to formally adopt the the online voting system, which under the rule governing the meetings required approval by three-quarters of the lawmakers online.

“This remote system for representing our constituents and meeting our constitutional responsibilities is clearly flawed,” Rep. Anne Donahue, a Northfield Republican. “I cannot pretend that I feel able to function in the way I would normally consider to be necessary to meet those duties.”

Despite her misgivings, Donahue was a vocal supporter of the idea.

“To the extent that we are meeting crucial needs of the people of Vermont, however, working under an impaired system is as necessary as it is for our health care system to postpone ordinary services in order to respond to urgent needs,” she said.

The rule was approved unanimously by a roll-call vote in which members responded after their names were called. Members who called in by telephone rather than video had to identify themselves and give their votes in a complete sentence.

Among the first pieces of legislation that was approved by the House was a bill, already passed by the Senate, that makes it possible to approve wills remotely during the emergency.

Maxine Grad, a Democrat of Moretown, said current Vermont law requires that wills must be authorized in person, which is contrary to Vermont's pandemic requirements that people stay apart.

Grad said probate attorneys are saying that many elderly Vermonters who don’t have wills or want to update them would like to do so without endangering themselves.

”They feel particularly vulnerable during the Coronavirus pandemic," Grad said. "However, many are reluctant to travel or be in the same room as other people during the pandemic."

The bill allows such wills to be approved electronically. The proposal also passed unanimously.

For most people, the new coronavirus causes mild or moderate symptoms, such as fever and cough that clear up in two to three weeks. For some, especially older adults and people with underlying health problems, it can cause more severe illness, including pneumonia, and death.

On Thursday, the Vermont Health Department reported three new cases of COVID-19 in the state, bringing the total to 825, up three from Wednesday. There have been 43 deaths, unchanged from Wednesday.

Baker said no one inside the Corrections system is symptomatic, which he described as having high temperatures and respiratory problems affecting breathing.

This week, 90 vehicles drove by the St. Johnsbury prison in a procession in support of the staff and inmates, Baker said. More such processions are expected at other correctional facilities, he said.

“I want to thank the citizens who are doing that. It means the world to our staff. It's been a long six weeks for them," Baker said.

Two University of Vermont students have filed a class-action lawsuit against the school seeking reimbursement of tuition and other fees, saying they have lost the benefit of in-person instruction and other activities when the campus closed due to the coronavirus outbreak.

The students from New York and the United Kingdom filed the complaint in federal court in Burlington on Wednesday.

UVM shifted to online learning in March. An email seeking comment was sent to a spokesman for UVM.

A number of colleges and universities around the country are facing similar lawsuits.