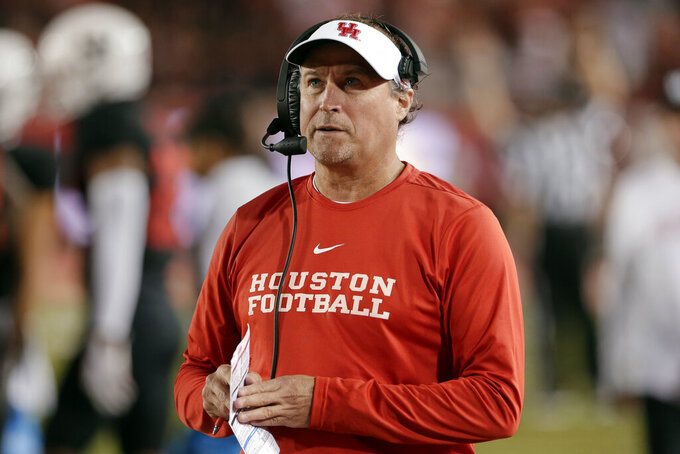 FILE - In this Oct. 24, 2019, file photo, Houston coach Dana Holgorsen watches during the second half of the team's NCAA college football game against SMU in Houston. Holgorsen, in his second year at Houston, and the Cougars face Baylor this week, in the first meeting between the schools since 1995. (AP Photo/Michael Wyke, File)

The Houston Cougars are again without an opponent and still waiting to play their season opener as COVID-19 issues wiped out three more major college football games Wednesday.

The latest team to bail on Houston was North Texas, which said it would not be able to field a team for Saturday's road game after four positive tests this week. The school didn’t specify an affected position group or how many additional people needed to self isolate because of contact tracing.

Tulsa's scheduled game at Arkansas State this week was also postponed. Arkansas State said only that it was unable to assemble a two-deep depth chart at an unspecified position.

South Florida at Florida Atlantic was the third game of the day postponed, with USF pulling the plug. The school initially said it was pausing football activities to do testing and contact tracing after finding out that its previous opponent, Notre Dame, was dealing with a COVID-19 outbreak.

Like Houston, Florida Atlantic has not yet played. It had to postpone an earlier game against Georgia Southern because of its own outbreak.

Earlier Wednesday, the Atlantic Coast Conference rescheduled Notre Dame at Wake Forest for Dec. 12. The seventh-ranked Fighting Irish had 13 players in isolation with COVID-19 and 10 more in quarantine due to contact tracing.

Wake Forest has moved its nonconference game against Campbell to Oct. 3, a previously open date. Notre Dame is going to keep its open date on Oct. 3, giving the Irish more time to get their players back.

As the number of games involving FBS teams postponed or canceled since Aug. 26 reached 21, another conference is taking steps toward trying to play fall football.

Mid-American Conference university presidents are scheduled to meet Friday with playing in the fall on the agenda, a person familiar with the meeting told The Associated Press on condition of anonymity because the conference was not making its return to play discussion public.

The MAC was the first FBS conference to postpone fall football in early August because of concerns about playing through the pandemic.

On Thursday, presidents' meetings will be held in both the Pac-12 and Mountain West, with both conferences eyeing late October starts to the football season after initially postponing all fall sports.

All this comes as the Southeastern Conference prepares to kick off its season with seven games on Saturday.

“I don’t know that I would call this a normal feel to Week 1, but it does feel like Week 1," SEC Commissioner Greg Sankey said. “I appreciate that we’re here.”

SEC teams might play twice before Houston gets in its first game. The Cougars' next scheduled game is Oct. 8 at home against Tulane.

Houston was scheduled to play last Friday at Memphis, but the American Athletic Conference put off that game a week in advance because of a virus outbreak among the Tigers. It was replaced by a hastily arranged reunion with former Southwest Conference rival Baylor last Saturday, but the Bears had to cancel that game only a day before kickoff because of multiple positive tests.

That cancellation drew the ire of Cougars coach Dana Holgorsen this week.

Houston athletic director Chris Pezman said Wednesday that he understood the “COVID-related decision North Texas has made to not play” and appreciated the consistent dialogue with UNT officals.

“I am disappointed for our student-athletes who have continued to focus on competing this season and were ready to play this Saturday," Pezman said. "We will continue to work to adjust our schedule with the hopes of playing as soon as we can.”

The Cougars were originally supposed to open the season Sept. 3 against Rice, but that game was postponed in August. That was after a Sept. 12 game at Washington State was canceled when the Pac-12 originally decided not to play this fall.

North Texas (1-1) was coming of a 65-35 home loss to SMU last Saturday. The Mean Green’s next scheduled game is their Conference USA opener at home Oct. 3 against Southern Miss.

"We knew that there would be challenges with COVID-19 this season and we were taking precautions to hopefully avoid this situation,” North Texas AD Wren Baker said. “We are hopeful we can resume safe activities soon.”