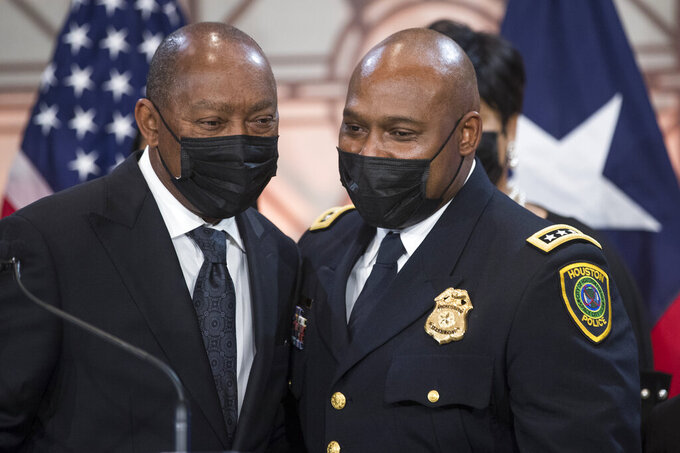 Houston Police Chief New Houston Police Chief Troy Finner embraces Mayor Sylvester Turner after he is sworn in as HPD's newest leader during a ceremony at City Hall Monday, April 5, 2021, in Houston. Finner is a 54-year-old veteran who hails from Fifth Ward and attended Madison High School in Houston. He formally takes the reins of the police department, the same day that outgoing Chief Art Acevedo is sworn in as chief in Miami. (Brett Coomer/Houston Chronicle via AP)

HOUSTON (AP) — Houston's newest police chief was sworn in during a ceremony Monday in which he asked residents in the nation's fourth-largest city for their help in bringing down rising crime, including a 37% increase in homicides.

Troy Finner succeeds Art Acevedo, who earlier Monday was sworn in as chief of the smaller Miami police force.

Finner, who was executive assistant chief under Acevedo, takes the reins of a 5,300-officer department that like others across the U.S. has seen a rise in violent crime over the past year during the pandemic. Finner said as the Houston Police Department moves forward, “We are going to need everybody."

“I’m excited. Yes, a lot of crime out there right now. But you know what, I’ve never walked away from a challenge,” Finner said during a ceremony attended by his family, including his parents and his 10-year-old son, Wyatt, who pinned the chief's official badge on his father's uniform.

“We cannot sit back and wait for the upward trend in crime to change on its own. I have given the department many of the resources it needs and will give them more. But over the next several months, HPD along with the community must be very focused in reducing crime across the board,” said Mayor Sylvester Turner.

Finner, a Houston native, began with the city's police force in 1990.

Finner takes over as the department is still dealing with fallout from a deadly raid on a “no-knock” warrant in 2019 that resulted in the fatal shooting of a couple and led to the indictment of a dozen current and former officers tied to a narcotics unit. The department also faced scrutiny after officers in April 2020 fired their weapons 21 times at a man experiencing a mental health crisis, killing him.

Community activists have been critical of what they see as the slow implementation of recommendations on how to improve the department that were made by a task force appointed during last summer's nationwide protests against police brutality and racial injustice.

“I know Chief Finner will adhere and agree and will move forward to implement many of the reforms," Turner said.