'How many of us will be left?' Catholic nuns face loss, pain 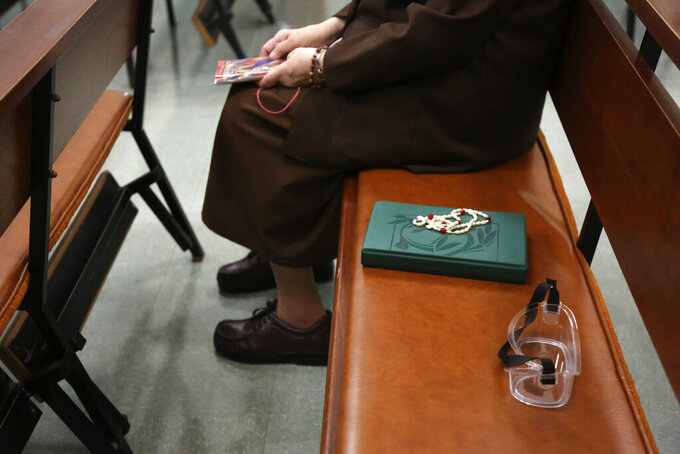 Sister Mary Carol Kardell, of the Felician Sisters of North America, sits beside a Bible, rosary beads and goggles during morning Mass at St. Anne Home in Greensburg, Pa., on Thursday, March 25, 2021. Last October the nuns lost one of their own, Sister Mary Evelyn Labik, to the coronavirus. (AP Photo/Jessie Wardarski) 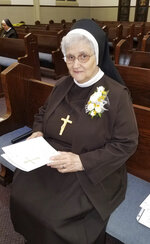 GREENSBURG, Pa. (AP) — At the front desk, the kindly nun who greeted visitors is missing, and in the chapel, where stained glass paints the walls with pastels, she no longer waves hello from the last pew on the left. In the convent’s living room, Sister Mary Evelyn Labik isn’t resting in a tan recliner, and on its porch, she isn’t relishing the hummingbirds.

The heart of this little convent is gone, alongside 20 other Felician Sisters around the U.S. And as the world around them ebbs into normalcy, surviving sisters are feeling a wrenching grief over their losses and a nagging need to know what it all means.

“There’s got to be a reason,” Sister Mary Jeanine Morozowich says of her survival. “What is God asking me to do?”

Among hundreds of communities of Catholic sisters, the Felicians have neither the ubiquity of bigger ones like the Salesians, nor the singular focus of those like the School Sisters of Notre Dame, nor the repute of women following in Mother Teresa’s footsteps in the Missionaries of Charity. But they are scattered like mustard seeds across the continent and beyond, from a clinic in Jacmel, Haiti, to a preschool south of the Arctic Circle in Tulita, Canada, running affordable housing, ministering to inmates, teaching in schools and, time and again, focusing their work on the poor, disabled and sick.

Around the Felician world, gripping news trickled out from their convent in Livonia, Michigan, last March, of sisters becoming sick and being hospitalized.

By Good Friday, Sister Mary Luiza Wawrzyniak became the sisters’ first casualty there, and three days later on Easter Sunday, two more died. By the end of the first week, the toll was five, and by the end of the second week it was a staggering 10.

These were women who held the hands of the dying and who raised the unwanted, who pushed chalk to slate to teach science and grammar and, through their own example, faith.

And, in an instant, they were gone.

“How many of us,” Morozowich wondered, “will be left?”

Confined to their rooms as they desperately tried to stop the spread, the Livonia sisters cracked their doors in the morning to collect breakfast trays. They peered down the hallway to see if a new sign appeared bearing the news, in dark marker on plain printer paper, that the night had taken another.

When it did, they absorbed it alone, pinching rosaries and mouthing the same words again and again.

“May our sister,” they asked, “enter the kingdom of peace and light.”

By the end of Livonia’s outbreak, 13 were killed, but summer seemed to bring an end to the crisis. Lockdowns persisted at some of the convents, but in others, a blissful sense of normal continued, going about their work and joining together for communal meals and the daily bookends of religious life — morning and evening prayers.

The reprieve wouldn’t last for the Felicians, though. A second wave of infections haunted and taunted with erratic efficiency, and by the middle of November had robbed them of sisters in Buffalo, New York; Enfield, Connecticut; and here in Greensburg.

At first, it seemed like Labik had nothing more than a cold. But soon, the 78-year-old was taken away by paramedics, making the sign of the cross as she was led to the ambulance.

From the hospital, when she spoke to her sisters by phone, she was lighthearted and laughing. They made plans for when she would return before, suddenly, she took a turn for the worse.

When word of Labik’s death reached the convent, her six sisters went to the chapel, where they prayed and cried. She was later placed in her casket barefoot, in the Franciscan tradition, and buried in her brown habit and black veil, with a wood crucifix on string around her neck, and the simple silver band she was given when she professed her final vows on her left hand's ring finger.

“Deus meus et omnia,” was inscribed inside. “My God and my all.”

No women took final vows with the Felicians in 2020; they ended the year with 455 sisters across the continent. Fifteen sisters died of varied causes, in addition to the 21 who died of COVID-19. Labik was the only sister to die in Greensburg, a shadow of the loss elsewhere and yet no less profound.

“Everywhere we go,” says Sister Amala Jose, who is a part of the Daughters of Mary community but lives with the Felicians, “we remember her and we miss her.”