How NHL consolidated from 2 bubbles to 1 to finish playoffs 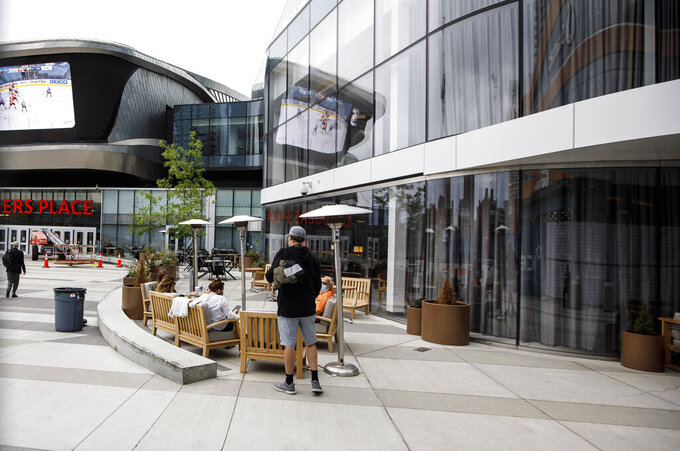 FILE - People are seen inside the bubble at the NHL Western Conference Stanley Cup hockey playoffs in Edmonton, Alberta, Monday, Aug. 24, 2020. When the NHL made plans to resume its season for the playoffs in two quarantined bubbles, it added the leap of consolidating to one for the conference finals and Stanley Cup Final. Two Eastern Conference teams and league staff made their way from Toronto to Edmonton with no hiccups, and Deputy Commissioner Bill Daly said it wasn’t as daunting as expected. (Jason Franson/The Canadian Press via AP, File)

EDMONTON, Alberta (AP) — When the Tampa Bay Lightning and New York Islanders left the familiar confines of the NHL's Toronto bubble last weekend, they masked up to board physically distanced buses and then flew west across Canada on separate charter flights.

They were handed boxed lunches on the planes, got on different buses when they landed and checked into the Edmonton bubble. The Lightning went first Saturday, followed the next day by the Islanders and NHL employees. The Vegas Golden Knights and Dallas Stars have been here since late July.

Two bubbles were suddenly one for the league's final four and, as early as next week, the Stanley Cup Final.

The challenge of consolidating two quarantined bubbles with more than 1,300 people on site and keeping everyone safe during the pandemic is not easy, and it's not completely done.

“Once we get down to four teams and having to travel two teams and some league personnel from one bubble to the next, probably in my mind was not as daunting as what we kind of went through at the start," he said. "In terms of getting players from individual training camps in locations, some of which have big outbreaks going on, keeping them healthy, getting them into the bubble and keeping them safe. It was a daunting task and so far, so good.”

The league has reported zero positive coronavirus results among 29,890 tests administered to players, coaches and staff from their arrivals July 26 through Sept. 5, the first day of bubble-to-bubble travel.

Have there been near misses? Daly estimated that six people tested positive for the coronavirus and were is loaded under local and Canadian health rules. These people serviced but do not live in the Edmonton bubble and didn't interact directly with players; the group includes arena, restaurant and hotel workers and vendors who are also tested daily. Daly did not identify them or the timing of their positive test results.

“They go home at night, they see family members, they see friends, so obviously they pose some level of risk, Daly said. ”They’re isolated appropriately, get the right medical care and we’ve not had any outbreak situation where they’ve infected other people."

With no positives inside the bubble after nearly 30,000 tests, Daly credited players and everyone else for a "total buy-in" to following the rules.

Amid all the rules and guidelines, Lightning coach Jon Cooper said he and his team were able to suspend disbelief while flying so that it felt like an old-fashioned road trip.

“When you’re on the bus, everything’s kind of normal,” Cooper said. "But when we pulled up to the hotel and now you’ve got to wait for the security guys to open the gates and then you kind of get locked in and there’s fences all over the place, then you’re like, ‘OK, we’re back in the bubble.’”

The NHL is still working with the Canadian government to allow family members in, which was planned for this round, but there are some border and quarantine obstacles to overcome. So far, Canadian citizens are the only ones permitted.

Yet the hockey goes on, with over 300 people now inside the Edmonton bubble. That's down from 700 in each city at the start of the playoffs, and while it has been working, Daly isn't ready to declare victory.

“To this point, knock on wood, the integration has been very seamless,” he said. “We still have three plus weeks to go, but it’s all worked very well so far.”