How Sanders is helping keep the progressive movement strong 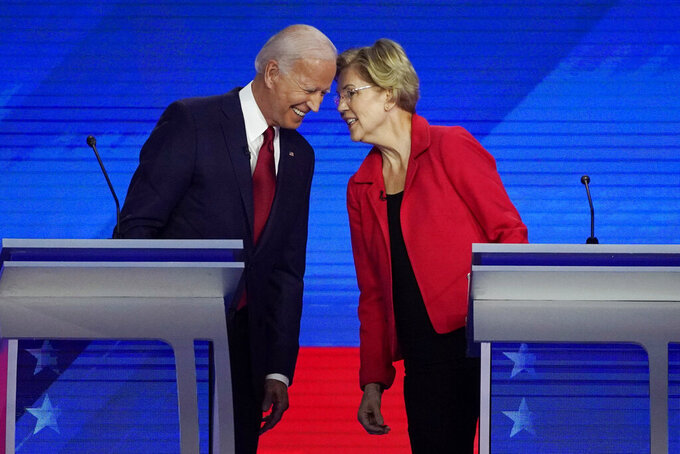 FILE - In this Sept. 12, 2019, file photo Democratic presidential candidates former Vice President Joe Biden, left and Sen. Elizabeth Warren, D-Mass., talk during a Democratic presidential primary debate hosted by ABC at Texas Southern University in Houston. Warren, a Massachusetts senator and leading progressive, has become an unlikely confidant and adviser to Biden, the presumptive Democratic presidential nominee. They talk every 10 days or so, according to aides to both politicians who requested anonymity to describe their relationship. (AP Photo/David J. Phillip, File)

But as Democrats gathered virtually to formally select Joe Biden as their presidential nominee, the Vermont senator was perhaps at the height of his power, despite twice losing his White House bid.

Sanders, who addressed the Democratic National Convention on Monday, was the last primary challenger standing against Biden. He retains the party’s largest cohesive constituency in a progressive base unwavering in its support. And his signature ideas on single-payer health care, tuition-free college and remaking the economy to combat climate change are now part of the everyday debate.

“Our movement continues and is getting stronger every day,” Sanders said in his address. “Many of the ideas we fought for, that just a few years ago were considered ‘radical,’ are now mainstream. But, let us be clear, if Donald Trump is reelected, all the progress we have made will be in jeopardy.”

He urged his supporters, and many people who voted Republican in 2016, to unify around Biden while also blistering Trump for leading the nation “down the path of authoritarianism."

“This president is not just a threat to our democracy, but by rejecting science, he has put our lives and health in jeopardy,” Sanders said of the coronavirus outbreak. “Nero fiddled while Rome burned; Trump golfs.”

The 78-year-old Sanders almost certainly won't mount another White House bid. But he's solidifying a legacy as he helps Biden build ties with the left to prevent the type of internal divisions that helped Trump win in 2016. And he's basking in victories that progressives have recently notched in Democratic congressional primaries in Missouri, New York and Illinois, many of which he helped engineer.

“Electorally we are doing very well,” Sanders said in an interview before the convention. “Most importantly, young people in this country, whether they’re Black or white or Latino, Native American, Asian American, young people strongly support the progressive agenda.”

The progressive movement is still far from the driving force of the Democratic Party. Biden won the primary largely as a centrist who relied heavily on his decades of experience working within the Washington system — not promising to tear it down. His vice presidential pick, California Sen. Kamala Harris, is similarly aligned with the Democrats' traditional establishment.

“They are going to get a seat at the table, but Joe Biden is very much a creature of Washington,” said Colin Strother, a Democratic strategist who works with Rep. Henry Cuellar, a conservative Texas Democrat who in March narrowly defeated a primary challenger from the left who had been endorsed by Sanders. “They want a revolution. That’s not how Washington works.”

Maurice Mitchell, the national director of the Working Families Party, conceded that the former vice president “is not a progressive.”

“But the conditions have been set by progressives and, even though progressives did not prevail in the presidency, our issues and our movement surely have,” said Mitchell, whose group initially endorsed Elizabeth Warren before siding with Sanders and eventually backing Biden last week.

Their finished product includes renewed calls for a $15 minimum wage, sweeping overhauls to decrease racism in the criminal justice system and reducing student loan debt for millions of Americans. But Biden has remained opposed to fully government-funded health care under Sanders’ signature “Medicare for All” plan and hasn’t signed onto the Green New Deal climate package.

RoseAnn DeMoro, a Sanders confidant and former executive director of the National Nurses United union, dismissed the work of the Biden-Sanders “unity task forces” as too little, too late.

“It’s good to try and pander to the progressive community," DeMoro said, “But I don’t buy it.”

Sanders has continued to insist that the top priority for progressives is electing Biden. But, once that’s accomplished, “we have got to do everything we can to mobilize people to fight for an agenda that works for working families,” he said in the interview — even if that might not mean always lining up with the new administration.

Sanders used his vast contact list to send 350,000 texts and raise more than $730,000 for like-minded congressional and local candidates who competed in Aug. 4 primaries. That included more than $100,000 for Cori Bush, a racial justice activist who unseated longtime Missouri Democratic Rep. William Lacy Clay, who was endorsed by Harris.

Those close to Sanders also credit him with persuading activists and others who might not have run for office to become candidates, effectively “lowering the drawbridge” that had barred access to electoral politics for many.

One example is Alexandria Ocasio-Cortez, who will help nominate Sanders at the convention and is widely seen as his successor in leading progressives. The New York congresswoman easily won her primary and further demonstrated her power by helping former middle school principal Jamaal Bowman take out long-serving Rep. Eliot Engel in New York's primary.

Similarly, Ocasio-Cortez's close allies, and proud fellow members of “the Squad,” Reps. Ilhan Omar of Minnesota and Rashida Tlaib of Michigan, bested primary challenges from more centrist Democrats. Their message in Congress often overlaps with protests against institutional racism that spread around the country in the wake of George Floyd’s death in police custody.

“You can’t really have one without the other,” Lorella Praeli, president of Community Change Action, which works to empower low-income people, especially those of color, said of progressive values and the push for racial and social justice.

“I just think that we’re kidding ourselves if we don’t confront a hard truth," Praeli said. "We can try to do it by coming up with and delivering a Band-Aid solution, or we can say we have a once-in-a- generation opportunity right now to really get at the root of the problem.”

That's a part of a larger fight that could dominate future presidential races Sanders won't run in. He said during the interview that it is “very unlikely” that he's a 2024 presidential candidate, but also refused to speculate on who might succeed him as the movement's next White House hopeful.

“They want to know who's running in 2092," Sanders joked. "In 2092, there was a baby that was born yesterday that announced her candidacy.”